Ounce for ounce, the ermine may be toughest critter in Alaska 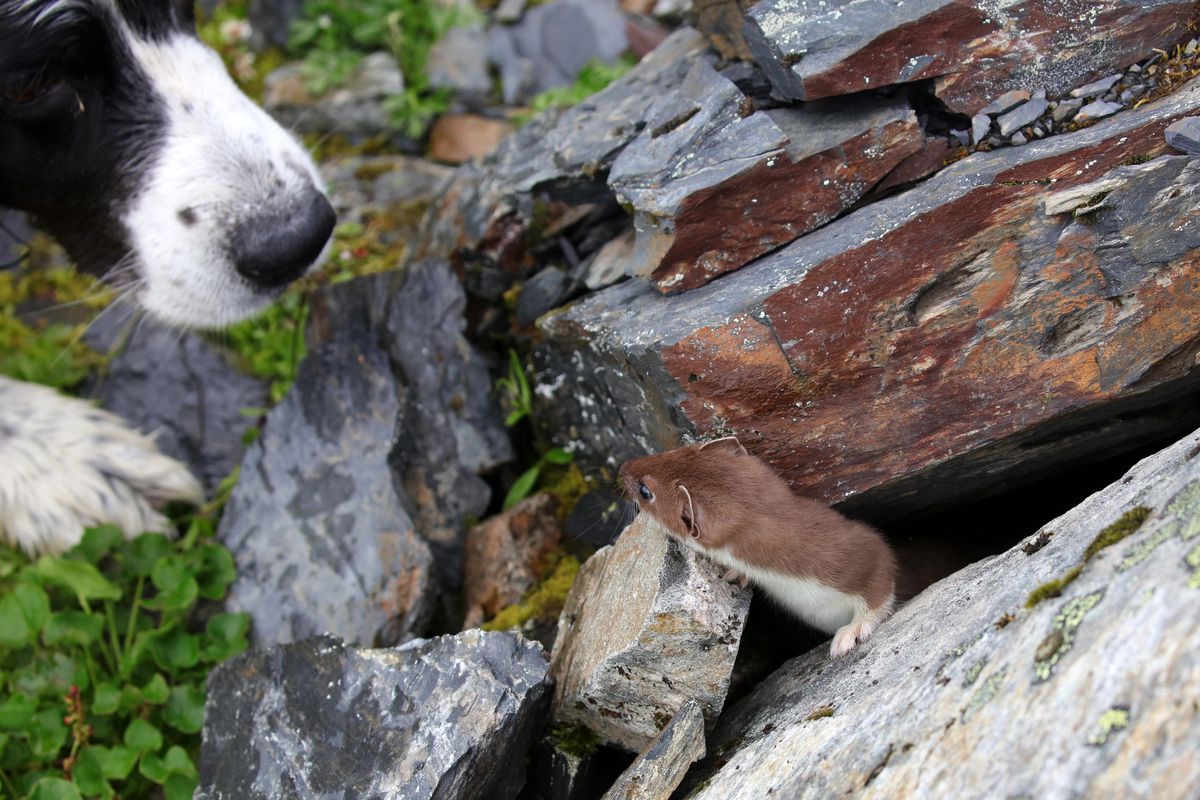 Winchester the English setter comes face to face with a defensive ermine. (Photo by Steve Meyer)

Winchester the English setter comes face to face with a defensive ermine. (Photo by Steve Meyer)

Just down from the summit, a mountain lake emptied into streams before the waters converged and fell over the rock face to the valley below. We had climbed the rocky path along the waterfall earlier in the morning and made our way above a steep summit wall of shale rock to find our first view of mountain fields.

There we hunted with three English setters, each of which worked the country in separate trajectories — one wide-ranging and purposeful, another daring and curious, and a third that stayed close. That was until we headed back at the end of the day, and all three setters converged near a rock where the streams met.

I heard a chirping sound and watched as each of the dogs lunged toward the rock and sprang backward.

"Is it a wounded bird they've got in there?" I asked Steve, who didn't have my angle of view.

We were 400 yards away, and I couldn't make out anything except the antics of the dogs. Hugo half-crouched with his head cocked, Cogswell stood tall with his ears back, and Winchester's nose pointed toward the base of the rock.

The chirp from the rock grew louder as we approached. Now, it sounded more like short, high-pitched barks. The dogs continued to reposition themselves around the rock with full attention. They didn't spare a look toward us when we finally arrived to see what they'd found.

At first, we didn't see anything. Then Steve spotted the darting head of an ermine. Winchester's nose was about 6 inches from the rock when the tiny creature struck out of a crevasse, quick as a snake.

Winchester recoiled, and the ermine missed only due to the shortness of its strike, but it was back in moments after attempting the same attack from the underside of the rock where the other two dogs stood with their heads held back in astonishment.

Their cautious curiosity was like my own — what is this tiny creature? This hissing, barking little predator was surely no country mouse or squirrel. Rather, there was a scary amount of quickness and unpredictability in its movement. Ounce for ounce, it may have been the toughest animal I've ever seen.

We pulled the dogs away from the rock as best we could — for their safety and to give the tough guy his space. Although I admired the decision of a creature that weighed only a few ounces to fight off three 50-pound dogs, I didn't want to see who would win.

My first encounter with an ermine was in a duck blind. Steve and I first spotted it as we put a few fresh boughs of grass on the blind before light. It patrolled the area with interest throughout the morning, and saw us shoot two teal and bring them back to the blind.

We watched as it made its way toward my pack, where I'd put the two ducks. It took a few steps, stopped and looked at me, and then made a few more steps.

I couldn't help but let it try. This cheeky little creature looked at me one last time before entering my pack. We watched as it backed out with one of my teal in its mouth. It dragged it backward only a few feet in front of where I sat, with an eye toward me.

"That's enough!" I said. It looked like it might fight me for it but let Steve grab the duck away. It ran off, but a few minutes later, it headed back for the pack.

One of my favorite stories about a weasel — the words "ermine" and "weasel" are often used interchangeably although the ermine is a weasel and weasel refers to a least weasel. A friend hunted moose with her husband along the Koyukuk River. She and her husband were hunkered in grass near the shoreline when she heard the sound of a moose getting up, followed by the rake of horns. "Sounds like a bull moose," she whispered.

At the same moment, a weasel popped up in front of her. She tried to convince the weasel to leave her alone, making slow and silent gestures and blowing at it. But it was too curious to be scared away. Meanwhile, her husband had sighted in on the bull and fired a shot, taking the moose down. When the pair got up and walked toward the downed bull, the weasel followed them like a lost dog.

When someone mentions encounters with other hunters in the field, they usually mean other people. But sometimes I think of ermine first, and it makes me smile.

The same goes when someone mentions encounters with wildlife. Bears and wolves instantly come to mind. Perhaps the fact that there are no articles about attacks on humans by ermine makes them less worthy of being listed as dangerous. After all, bears are judged by what they are capable of doing to a human, and ermines are mistaken for the rodents they kill.

There's no doubt ermine are tough, though. Their confrontational style and bullet trajectory would make them far scarier than a bear — if they were similarly sized. Bears and ermine are both seen as dangerously adorable; the difference between the two is not size as much as character. A bear lumbers along in a sleepy-gentle way that can make you forget they are a sharp-toothed, razor-clawed predator capable of running 25 mph.

This fall was the first time I'd seen an ermine at such a high elevation, but true to their vole- and mice-consuming character, they adapt to a range of habitats throughout Alaska. From the woodshed to the mountainside and all points between, the ermine may have one title independent of its weight class. Call it the widest-ranging mammal predator in the state.