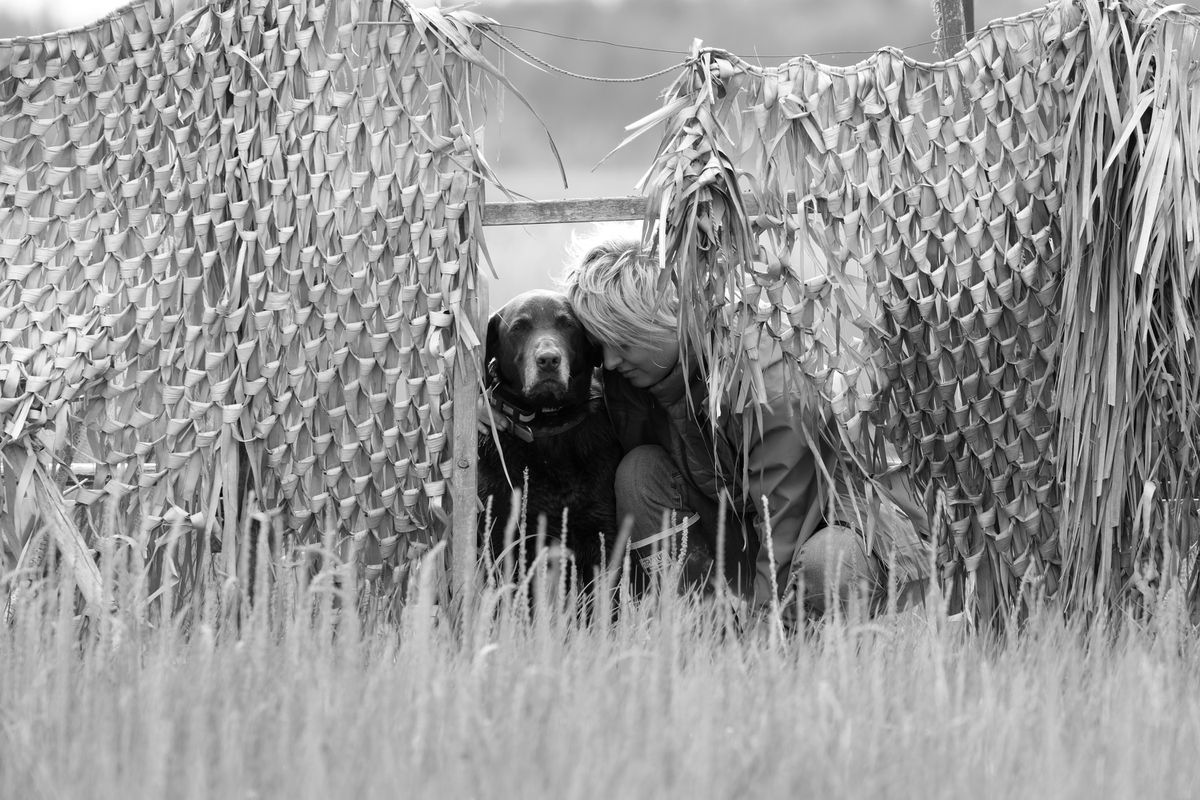 Christine Cunningham and Gunner in an old blind on his last trip to one of his special places in late June of 2016. (Photo by Steve Meyer)

Christine Cunningham and Gunner in an old blind on his last trip to one of his special places in late June of 2016. (Photo by Steve Meyer)

Sliding into the driver's seat of the SUV, I glanced to the backseat to see how Gunner was faring. Dog lovers, especially those with Labrador retrievers, are familiar with the guilty look. It isn't that dogs are sorry; they had a great time doing whatever it was that caused the guilty expression. The look is more likely worry about whatever scolding might come their way.

Gunner's tail thumped the seat as he tucked his big head down in a sheepish gesture. The evidence was overwhelming, as grouse feathers still clung to his muzzle. That was all that remained of the three birds that had been in the back of the vehicle.

A buddy and I had taken Gunner on his first hunt since he came to the family. With no expectations, he had shown promise, finding and retrieving birds as if he knew all about it. On the way home, we stopped at my buddy's house, and I went in for a minute, forgetting that jumping over a seat is not problematic for dogs. I don't know about most folks, but I just can't be mad at the big lugs when they do what they think is just simple dog fun. I scratched his ears and we drove home to tell Christine about his day, with no birds to show for it.

[Rescue dogs can become hunting phenoms. Mine did.]

When we met Gunner, he was in an 8-by-10-foot chain-link cage at the animal shelter. His deep bark reverberated through the kennel and was interrupted only when he stopped for a moment to lick the sores on his front legs. His incessant, anxious licking had created lesions. He had been at the shelter for 17 days, three days beyond the shelter's policy, which was a kill shelter at the time.

The man running the shelter couldn't bring himself to euthanize this young chocolate Labrador retriever and, knowing Christine, he called and told her about him. He had come to the shelter as a stray. He was a healthy, growing pup estimated to be around 9 months old. At 75 pounds, his loose skin promised he would grow to be a big, strapping dog as an adult.

Gunner, the name we chose for him, was a poster-perfect example of Labrador form and function. There was little doubt that he came from purebred stock, and we always wondered how he could have ended up at a shelter. We had no way to know if his bloodline included hunting, but it didn't matter. The only question was, would he like us?

We took him for a walk in the fenced-in yard behind the shelter, where his true Lab personality emerged. He stopped barking, and his tail wagged so hard we thought he might dislocate a hip joint. He pressed up against us and then jumped up, his big paws on my shoulders, and gave me a big slobbering Labrador kiss of thanks.

At home, it was as if he had always lived there. He would lie on his bed and watch us as we went about our routines. When we sat down, he would come and lie beside us and stare up with what always seemed like gratitude. He had to be coaxed up into the recliner to lie with me while I read at night. After that, whenever I would sit down, he would launch into the recliner with me. As he grew to 100 pounds, he would sometimes misjudge the trajectory of his launch and his momentum would take us over backward to lie like turned-over turtles.

Gunner's hunting bloodline proved out over the next nine years. He developed into a great waterfowl retriever. His big, strong build was a perfect match for the hard-running tidal sloughs, banked with deep mud. He loved to retrieve but he never liked the taste of duck much. When he retrieved a duck, he would spit it out into my hand as quick as possible.

Our annual trips to Redoubt Bay, on the west side of Cook Inlet, were his favorite. He would scamper up into whatever plane we took and sit with a bemused expression, while we lifted Cheyenne, his fat little counterpart, into the cabin.

Hunting with the pair, if there was one duck to retrieve and Gunner beat Cheyenne to it, she would swim to him and snatch it out of his mouth. Always a gentle giant, he let her get away with it, and it was high entertainment for us.

In the evening, we would sit along the tidal slough in front of the duck shack listening to the widgeons whistle by and watch the owls begin their night's hunt. Cheyenne would be passed out inside and Gunner would sit between us. His soft, melancholy manner was a perfect fit for those times in that place. He seemed to share our love of the country and just being there was enough for all of us.

At the end of the 2015 season, his ninth year with us, Gunner was a master at his craft. He was healthy and strong as ever, and we looked forward to the next year. I had driven to South Dakota to hunt pheasants with Winchester late that year, when the call came.

Christine told me, over the phone, that a strange abscess had appeared on Gunner's hip. The vet had cleaned it out and put him on antibiotics, and it seemed like just one of those things. Except it wouldn't heal.

Malignant is a word no one wants to hear. A follow-up CT scan revealed cancer had spread to his hips and his lungs.

[When Alaska gets cold and wet, ensure your hunting dog is protected]

Medical advancements allowed chemotherapy, in tablet form administered at home. It could buy Gunner some time. We agreed to try it, and if there were no debilitating side effects and he was happy, we would hope for the best.

All went well for several months. Gunner seemed himself. He went on runs with the other dogs, was always happy and adoring, with his big tail still wagging. We booked our annual trip to Redoubt Bay, sure he would be good to go.

And then, in early June of 2016, the mass in his hip appeared again. The vet told us to make the most of the next couple of weeks, there was no stopping it.

We took Gunner to the Kenai River flats, out to the blinds where he had grown up. For the first time in my life, I considered deliberately breaking a game law. I wanted to give him one more duck to retrieve. I didn't, a decision that still brings tears when I think of it.

And then one morning in late June, the pain medicine stopped working, and Gunner's tail stopped wagging. Later that day, Christine and I held him tight, tears flooding the floor of the vet's office, as his eyes closed for the last time, and we said goodbye.

It's been over a year now, the waterfowl season is in full swing, and we still haven't returned to Redoubt Bay. Perhaps we never will. Why, some people ask, would you bring dogs into the family, love them as if they were your children, knowing that they will have to leave early?

As with so many things in life that we love, there are no guarantees, and nothing lasts forever. I am just grateful to have had him in our life, for the memories his presence brought, grateful to have loved him so much that the pain of his leaving is real and always near the surface.

Steve Meyer of Soldotna is lifelong Alaskan and an avid shooter. He writes every other week about guns and Alaska hunting. Contact Steve at oldduckhunter@outlook.com.