Sharing your stories of misadventure in the outdoors 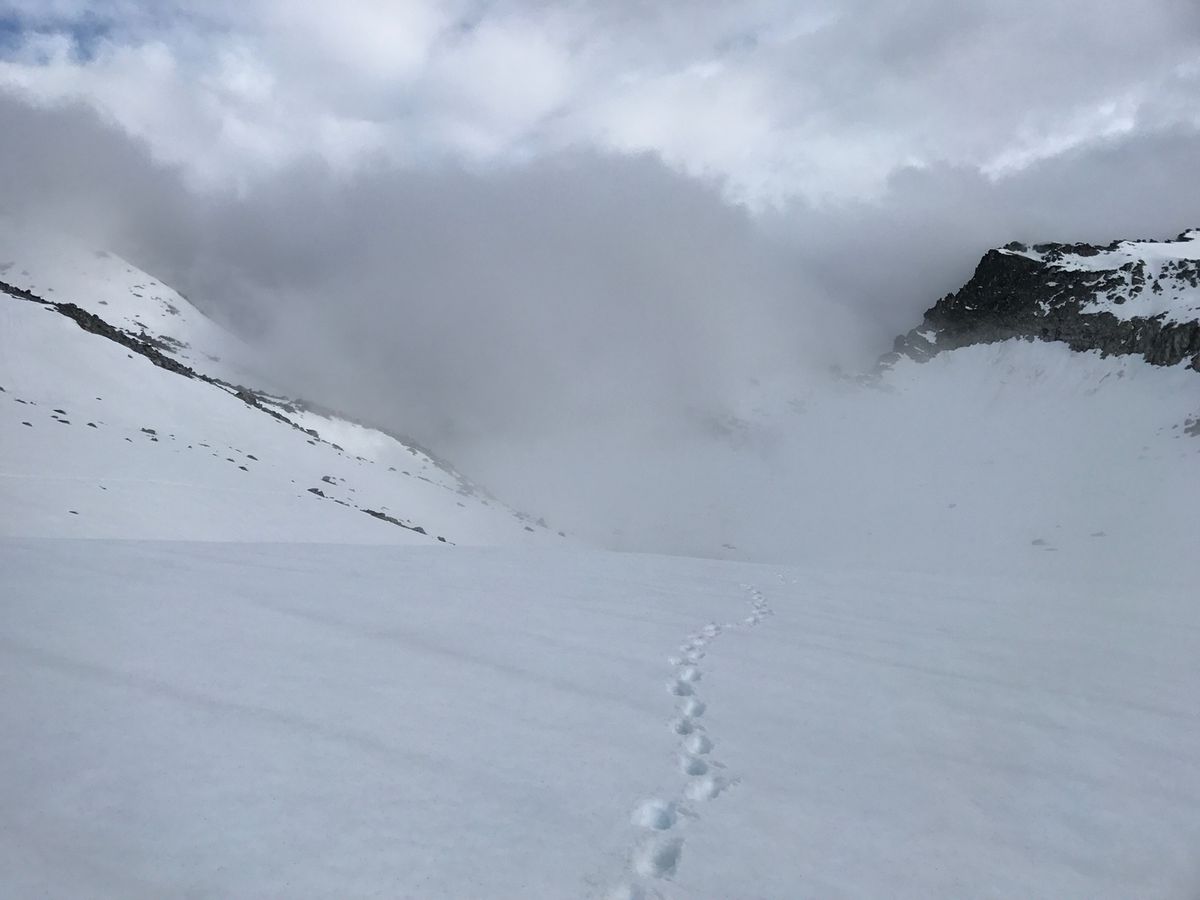 This is not what you want to see as you approach the pass between Snowbird Glacier and Snowbird Mine in the Talkeetna Mountains.  (Vicky Ho / Alaska Dispatch News)

This is not what you want to see as you approach the pass between Snowbird Glacier and Snowbird Mine in the Talkeetna Mountains.  (Vicky Ho / Alaska Dispatch News)

When I write this column, I sometimes feel like I'm flinging my words into the universe, rambling into the abyss as I do on so many solo hikes.

What gives me tremendous joy: hearing the universe speak back.

The best aspect of writing this column is interacting with readers. As I've shared my stories of outdoor woe, many of you have responded with your own tales of misadventure or tips for staying out of harm's way.

Going forward, I'll occasionally feature some of the most memorable reader responses. And let's keep the conversation going: Whether you email me, post a comment or slyly slip a "Signaling for Rescue" pamphlet on my desk (still waiting for that culprit's ID), I'll always try to respond in kind.

Here's a roundup of what some of you had to say (lightly edited for style and space).

"A funny story from Southeast, when doing forest inventory work for the USFS back in 1980. … We floatplaned into some very remote bay on Admiralty, I believe. Did a quick, cursory camp erect and went to work inventorying the national forest. We came back to camp many hours later to see one of the new, very expensive, USFS-owned geodesic dome tents floating perfectly erect about a half-mile out in the bay! It was quite a sight. We had obviously not put anything in the tent to weigh it down, nor staked it down and the wind had come up. We had a tiny inflatable boat and a tiny battery-driven motor for times when some situation or emergency might come up. … The inflatable came in handy that day. We just went out and towed it back in with a painter line. Going very slowly was not a problem with a tiny inflatable and a two-horsepower outboard."

— T.G. in response to "Want to sleep fearlessly in camp? Choose the right tent site."

A coat of ice

"I used to take youth groups out camping. Once, in very damp conditions near freezing, I warned everyone to keep dry and make sure all clothes were in the tent for the night, with boots in their bags. In the below-freezing morning, one young man comes to me with his only coat in hand; the coat was completely flat with arms extended and frozen solid, like an over-starched shirt. He had left it outside. It took awhile to get him back into it and, hopefully, it was a lesson learned."

— J.M. in response to "Frozen boots lead to a rude awakening in Alaska backcountry"

"There are few ranges in Alaska that fail to offer their versions of Chugach crud. On a steep slope, during an (Alaska) Range approach, I pulled on a large piece of granite that forced me into a somersault race down the slope. Rag-dolled and pummeled for perhaps 200 feet, I finished my last tumbling pass by sticking my landing firmly to waist-level at the top of a steep snow chute. The large boulder continued down slope, followed by a gaggle of rock cubs. Bilaterally and severely charley-horsed, my face bleeding, and bodily clubbed I'm sure beyond any of Roberto Duran's TKO opponents, I was able to hobble out for two days only because JJay carried BOTH of our heavy packs."

" 'Where did you get such good judgment in the outdoors?' 'From experience.' 'And how did you get your experience?' 'From bad judgment.' Hope you help folks gain some experience from others' questionable judgments."

"My worst outdoor mishap was also a bicycle crash. I was bicycling from Ouagadougou to Kongoussi (Burkina Faso), and was on a rough dirt single track trail on my touring bike complete with loaded panniers. I hit a bump that bounced the front panniers off of the rack and into the front tire, causing the bicycle, but alas not myself, to come to an abrupt stop. I endoed over the bars and landed on my face and shoulders. My feet were clipped in to the pedals, so the loaded bike then came down on my back and head. I was bleeding from several gashes and slightly stunned, but at least 10 miles from anywhere, so I had to press on. Fortunately the bike had no serious damage, and I eventually stopped bleeding when I became sufficiently dehydrated in the 110-degree heat. I made it to Kongoussi eventually, where I was able to buy bottled water and rehydrate. I later learned that Kongoussi means 'don't sleep here' in the local language, but the night I spent camping there is another story."

— J.D. in response to "On flat ground after a climb? Gravity can still get the best of you"