An Alaska life: He paddled the Yukon to get here in 1973 and hasn’t looked back 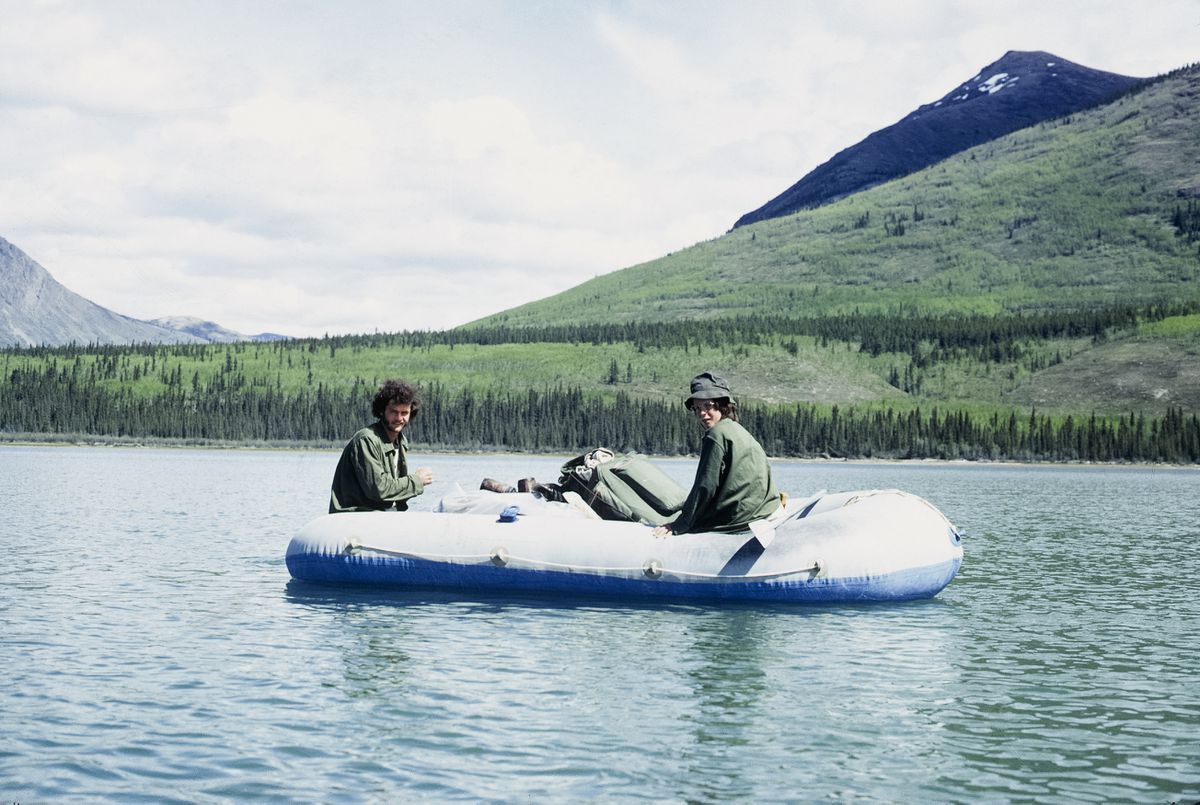 Jim Dore, left, and his younger brother Bob paddle their raft on the Yukon River between Dawson and Forty Mile in summer 1973. (Photo courtesy Jim Dore)

Jim Dore, left, and his younger brother Bob paddle their raft on the Yukon River between Dawson and Forty Mile in summer 1973. (Photo courtesy Jim Dore)

Jim Dore resolved to get to Alaska, one way or another.

He was sitting in a fourth-grade classroom in the suburbs of Chicago back in 1960, a year after Alaska became a state. While examining a map of the United States, the 9-year-old Dore spoke up.

"They forgot to put roads on this map," he said, looking at Alaska.

His teacher's response: "No, they didn't."

Dore was stunned. The farthest he'd gone from home was Michigan and Indiana. The thought of such a vast state ripe for exploration set his imagination ablaze. And that was when he made an unshakeable vow: Man, if I ever make enough money to get to Alaska, that's where I want to go.

Thirteen years later, at age 22, Dore crafted his plan. He could study mining and engineering at the University of Alaska Fairbanks. All he had to do was get there.

A business hired him to deliver a van from Illinois to Seattle. After his cross-country drive, he would fly to Juneau, catch a ferry to Skagway, ride a train to Bennett Lake near the Canadian border, then paddle a six-person rubber raft — which he bought from Sears for $89 — through 100 miles of interconnected lakes to the Yukon River. After floating the Yukon, he would get out at Circle, then hitchhike to Fairbanks.

His plan was ambitious, perhaps even more so when you consider that his brother Bob, who just turned 13 and was fresh out of seventh grade, came along for the ride.

What did his parents think?

"I know they had concerns," Dore said. But, he figured, there was no way he was doing this alone.

The real adventure started at Bennett Lake, where Dore and his brother tried to bend to their will a raft loaded down with enough food for three months. They paddled only about a mile before deciding to set up camp and secure their raft.

At that time the breeze was blowing off the shoreline, which kept their raft in deeper waters and gave them enough confidence to leave it loaded with their provisions — a move Dore described as "stupidity on display."

The wind shifted as they slept, pushing the raft toward the shore and all its pointy hazards.

"We went through a few patch kits," Dore said, adding that they had to restock on patches in Whitehorse. "It's kind of a first-day-on-the-job" experience.

Their raft was so heavy, he said, that six miles was the farthest they got on the lake even when the wind was at their backs.

But the brothers pushed on. They met a family with a farm near the Pelly River, almost 200 air miles northwest of Whitehorse, whose self-sustaining lifestyle, to Dore, seemed to be something out of time. On the Yukon between Eagle and Circle, they approached a gold dredge operation with about a dozen workers — one of whom called out, "You boys hungry?" That meal of the miners' leftovers from lunch, at that point on the trip, was a downright feast.

And when Dore and his brother reached Circle, they got lucky and caught a ride to Fairbanks on an 18-wheeler with a flatbed, where they tied down their faithful raft. Now, whenever Dore comes across a truck from Sourdough Express, still in business today, he expresses his thanks.

Bob flew back home at the end of the three-month voyage. I can only imagine what that first day back at school was like when his friends asked what he did over the summer.

The next two years, Dore and his brother carried on their Alaska adventures.

In 1974, they kayaked miles and miles of shoreline at Glacier Bay National Park, seeing only four other people in two canoes over 25 days.

In 1975, they set out from Dawson hitchhiking with Klepper folding kayaks. Their trip on the Peel River, from the Ogilvie River in the Yukon to the Mackenzie River in the Northwest Territories, took a harrowing turn when Bob's kayak overturned in rapids and he got caught in a strong undertow. Dore pulled him to safety, though they both lamented the loss of their supply of toilet paper — a sensitive subject over the next three weeks.

[Sleeping with bears? More tales and tips from outdoorsy readers]

Dore has led a quintessentially Alaskan life since he arrived in the state.

He took his last college final exam at UAF in spring 1974, then caught a plane from Fairbanks to Coldfoot and spent 3 1/2 months working on the haul road ahead of the construction of the trans-Alaska pipeline.

On his first day of work at Prudhoe Bay in late 1974, the wind chill was minus-95. As with most first days on the job, he had paperwork to fill out. "It was the only time in my life I enjoyed filling out an IRS tax form," Dore said, adding: "In a heated office." That kicked off the first of 11 winters spent working outside at Prudhoe Bay, with his coldest day clocking in with a wind chill of 148 degrees below zero.

In December 1978, Dore became a pilot, which he says is the best way to truly see and explore Alaska. In 1982, he was hired to deliver 15,000 gallons of diesel fuel to Rainy Pass Lodge, and he was there during the 1983 Iditarod when, he said, Norman Vaughan's dog team pulled into Rainy Pass without its musher. (Vaughan would turn up again later, on foot and peeved at his dogs.)

Dore has had some close calls as a pilot, too.

In mid-December 1982, his plane's battery died while he was on Styx Lake near Rainy Pass, and had he not had a spare aboard, he would've been stranded with temperatures at 35 below zero and plummeting. With an hour to go before sunset, he pulled off what he said was "the world's fastest battery change." He wouldn't forget to keep the battery warm after that.

While he was working for K2 Aviation in July 1991, Dore got a chance to fly the season's last Denali climbers from the Kahiltna Glacier base camp back to Talkeetna. He returned for their gear, but then the ceiling dropped. A snow squall made flying too risky and communication to the dispatcher — who happened to be his wife, Jean — impossible. He slept in the plane as it snowed six inches the first night. Another 10 inches fell the second day. Finally, after 44 hours alone at base camp, he got a break in the weather and headed back to Talkeetna safe and sound.

Dore also lived in a tent for five months in 1982 while he built a cabin on a slice of Alaska paradise near Seldovia on the Kenai Peninsula, featuring unspoiled views of Kachemak Bay and his pick of a dozen waterfalls nearby. His family lived there until they purchased a home in Anchorage in 1993, and they still visit the cabin often.

Now 66, Dore is an aircraft mechanic and truck driver with a memory as sharp as ever. And when he thinks about his first foray into Alaska — on a department store raft with his younger brother — he remembers what it was like to fly over their 1973 route after he became a pilot, and how awed he was by that change in perspective.

"I've been blessed many times over to have these opportunities," Dore said.

Not many people actually achieve what they set out to do in fourth grade. Jim Dore has done that — and then some.

Vicky Ho is the night homepage editor at the Anchorage Daily News. An avid hiker and skier, she's also a mediocre runner, terrible biker and part-time employee at a local outdoor retailer. Contact her at vho@adn.com, on Twitter @hovicky or Instagram @hovcky.