Ice fishing is the longest fishing season, boosting your chance for success 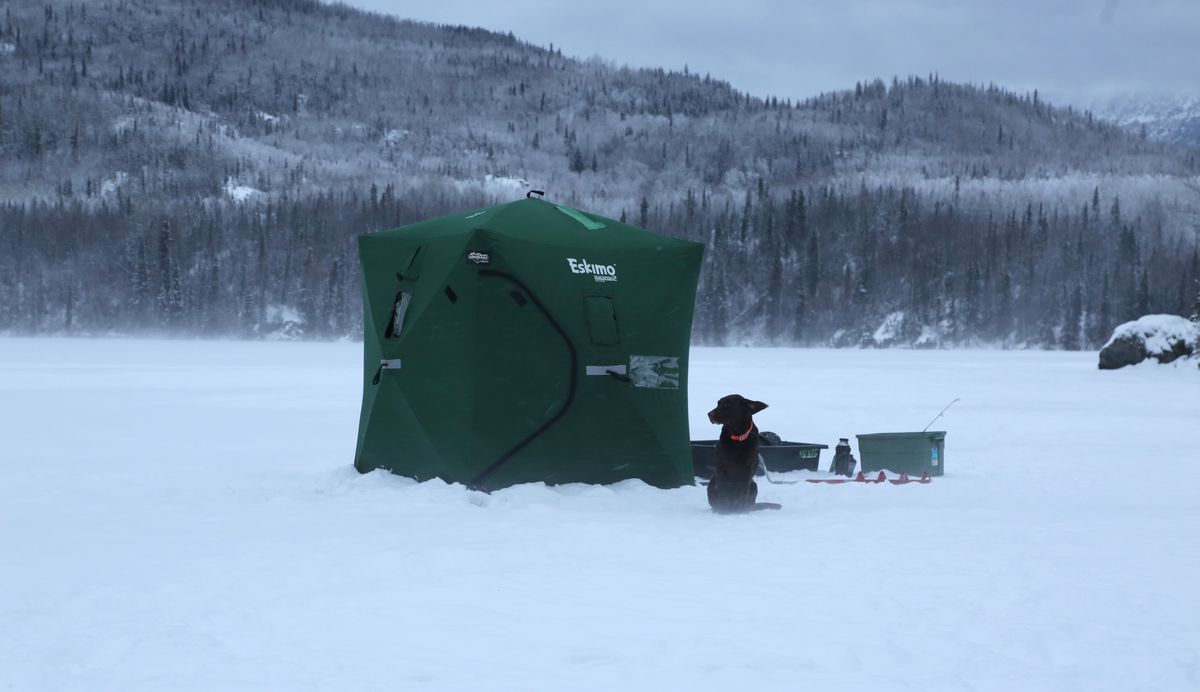 I had been hunkered over a single hole in the ice for five hours. Cold seeped through the floor of my ice house. The propane heater sputtered the last fumes of blue heat. If lunar charts and barometric pressure trend charts were correct, the fishing was supposed to be excellent.

Outside my shanty, Steve drilled another hole through the ice. He had drilled enough holes to make a golf course, and I knew he'd been switching lures and spots all morning. Meanwhile, I fished one hole and had not changed my lure once.

Part of my single-mindedness came from the fact that someone else tested every other variable in my scientific method. My tackle box for ice fishing — a two-sided Tupperware with hardware on one side and an assortment of lures on the other — might fool anyone who didn't know me that I use anything other than a single lure in a single color.

In my defense, the One Lure in the One Color method had caught silvers, rainbows, char, lake trout, grayling, kokanee and pike. It had caught fish in lakes and rivers. And it had lured fish whether jigged, trolled or cast.

But, there's a saying in poker that is also true of ice fishing: If after the first 20 minutes you don't know who the sucker at the table is, it's you.

My only consolation was that Steve had not caught any fish either. If he catches a fish, I thought, I'll switch to what he's using. But not a moment before. If things got too dull, there was always my book stashed away in the side of my shanty.

There's a lot of time to think when the fish aren't biting, and so my thoughts focused on lake trout. I liked to call them "mackinaw" — their non-Alaska name — which seems to suit the fish onomatopoeically as a word that sounds or suggests what it describes. Mackinaw, I thought, had a mysterious and snappy sound. Somewhere in the water below, one prowled the depths beneath the thermocline.

Lake trout are not as predictable as rainbow, char, kokanee, pike or serial fiction. They are not schoolers, but rather the lone wolf of the lake fishing world. There's literature that compares the body of a lake trout to its salmonoid cousins, the dolly varden and arctic char. But it's the differences in their bodies and not the similarities that came to mind while I sat in my camp chair.

I imagined the forked-tail and the wolf-nosed trout searching the depths. I pictured the striking body mass, a muscled spine of a creature. A fish like char that bites on the downcast does not evoke the same admiration as one that hooks itself chasing a rising lure. The lake trout strikes out of anger. And nothing makes him angrier than the One Lure in the One Color, or so I hoped.

The water felt like a clear blue sky in the way there was nothing in it. I'd pulled up the only branch on its rocky bottom. My lure now dangled 80 feet below the ice, a twist of orange brass that fluttered vertically like a Red Bull-charged butterfly.

The sound of a truck driving across the lake caused the water to slosh in my hole, and I could hear the ice fracturing in the wake. Then something hit my lure. I jumped out of my chair. I could tell by the way the line moved around in the hole that this wasn't a tree branch or piece of ice.

I reeled and reeled. It was a long way to the top. I barely gained on him as he fought. I worried about the line rubbing on the edge of the ice. Then I saw the first glimpse of the laker. His pointed nose led his body in circles as I reeled.

At the face of the ice hole, I couldn't get him to line up. As his nose waved back and forth across the bottom of the hole, I feared losing the lure on the edge of the ice. When it looked like a perfect lineup, I lifted. The fish came out of the ice just as it spat my lure and sank backward down the hole before splashing away. I plunged my arm down after him without thinking.

I quickly re-tied my beloved lure and let my line down to the exact place in the water column where the laker had struck. As my heart rate slowed, I felt like an old fisherman. Who would believe my story? Maybe my wet and frozen arm was proof?

If I tell Steve, I thought, it might be best to leave out the detail of how the fish looked me in the eye. Either way, it was easy to see how fishing stories grow into tales. The more I thought about it, the bigger the fish got, and when it crossed my mind that he might have even winked at me, I knew my story-making had gone too far.

I heard a commotion outside. By the time I reeled up and got the door to my shanty unzipped, Steve was standing, rod bent, as water piled out of the hole. Just as I approached, the long green body of the fish slid out on the ice.

The laker rolled and flared its fins. It was a beauty of a fish, glistening green and mean at 7 pounds. The word "mackinaw" came to mind as a combination of miracle and awesome. As Steve un-hooked the fish, I felt like I'd caught it myself, because dangling out of its mouth was the One Lure in the One Color.

As we head out to ice fish for the first time this year I think of that fish and can't help but reach for my favorite lure, because fishing is 99 percent luck. And, for me, that means I have to fish more than anyone else so my odds of being dealt a perfect hand are greater than my ability to play the game.

Christine Cunningham of Kenai is a lifelong Alaskan and an avid hunter. Contact her at cunningham@yogaforduckhunters.com.