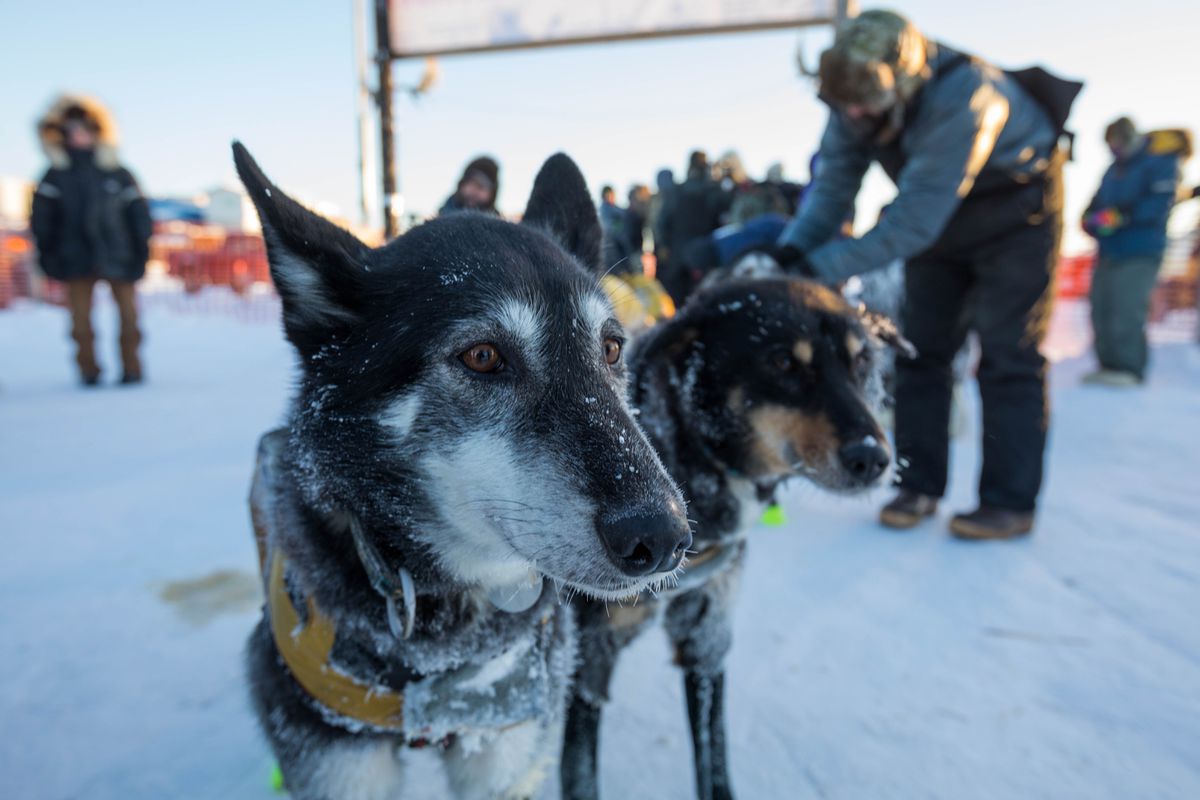 BETHEL — The Kuskokwim 300 Sled Dog Race has taken an unprecedented turn before its Friday start.

For the first time, the race will run two laps to its halfway point and back because of warm weather and open water. Local mushers agree it's the safest way to run the race, but say it could present challenges.

This course has been talked about in the past, but this is the first time that the decision has been made.

"It wasn't easy, and it wasn't unanimous," said Myron Angstman, K300 race committee chairman and one of the race's founders. "Tradition is a big thing, and changing the method of competition throws things off a little bit."

The board came to the decision Sunday night, on an evening of 36-degree weather and rain in Bethel. Angstman says the race will look as it never has before, because the river does.

"We have more open holes than normal, and the ones we have are bigger than normal," Angstman said.

Passing teams head-on will also be a factor.

"The place where that's most difficult is near Bogus," Angstman said. "There are some narrow spots there."

The trail will only cross the river in a straight shot over the ice across from Tuluksak. There are many shallow and well-frozen lakes, sloughs and creeks along the route. The only open water is by beaver dams, which happens even in the coldest winters.

Mike Williams Jr. of Akiak has been competing in the K300 for years. He says the change isn't ideal, but the river isn't either.

"I just kind of laughed," Williams said, "because we've never done this before. But it's understandable because of all the open water."

Williams expects his dogs to race well on the repeated route, because he made a lot of short runs while training, sometimes coming into his dog yard and then immediately taking off again.

"We've all trained for a specific event the way it's usually run," Kaiser said. "But it's the same for everybody, and everybody is going to have to deal with it."

Musher Richie Diehl of the K300 Race Committee said the decision not to run to Aniak, his hometown, was difficult.

"I definitely wanted it to come all the way up, and it was good hearing other people on the board give their opinions on why we shouldn't. It's an eye-opener to me," Diehl said.

But Diehl does sees a silver lining: He won't have to make his dogs run home and then leave, something he says is never easy.

Williams, Kaiser and Diehl say the river's open holes didn't affect their race prep this season. They trained on the tundra, a strategy that will help them on this year's overland trail.

The race checkpoints are now Tuluksak, Bogus Creek and Bethel. Where the Bethel checkpoint will be is still being decided, but only Bethel and Tuluksak will hold dog food and accept dog drops. As usual, the race will require teams to rest six hours in checkpoints and then four hours on the final pass through Tuluksak.

Two other races happen during the K300. The Bogus Creek 150 will run as scheduled; the Akiak Dash is being postponed a week to Jan. 27.

The reason that the K300 can't run an overland course along the entire traditional route is because there is no overland trail from Tuluksak to Kalskag. Angstman points out that this gap affects all winter travelers, not just the K300.

"So I would urge people to come up with plans for us to come up with an alternative trail that does not go on the river," Angstman said. "Because that would be safe for everybody, including our race, and it would prevent this from happening in the future."