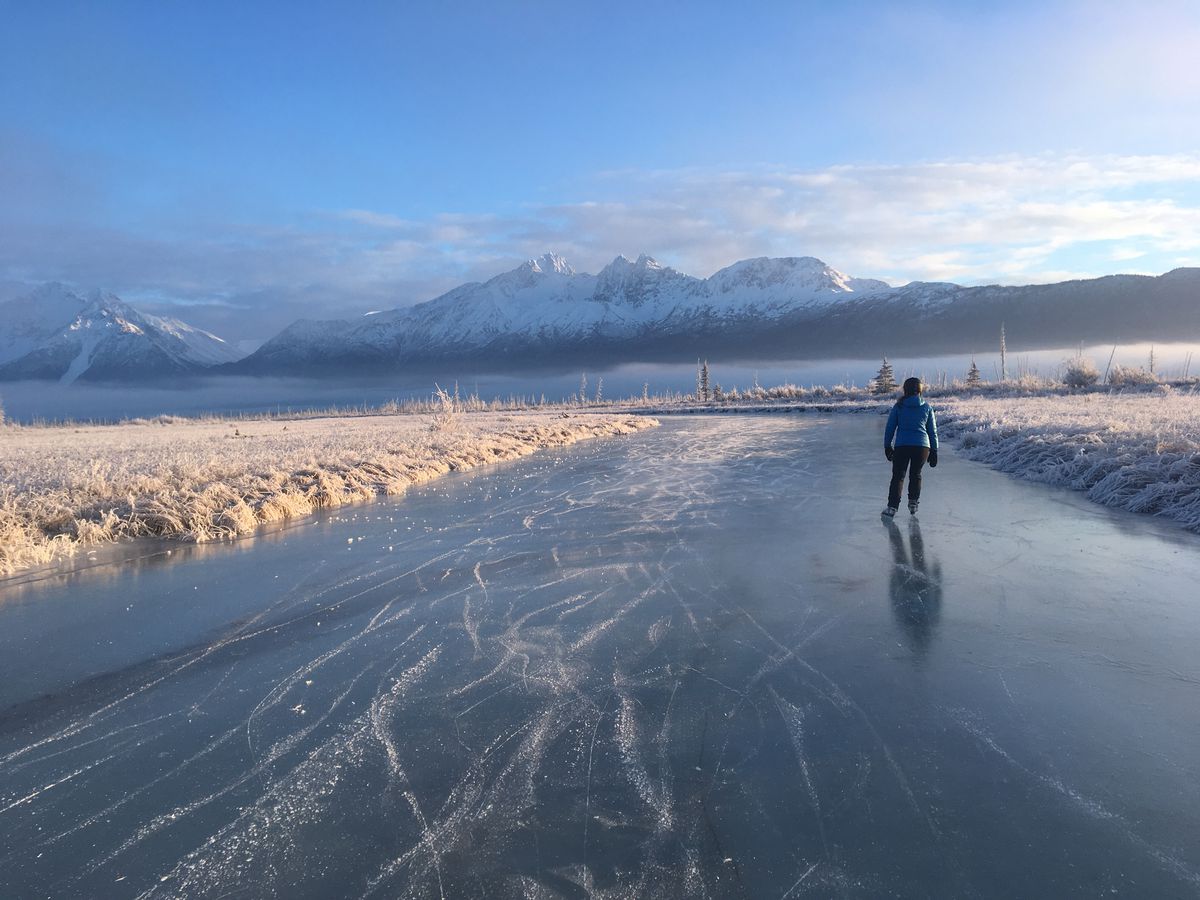 For me, it was love at first nordic skate.

I unwrapped the mysteriously heavy package and discovered 17-inch silver blades. It was Christmas a few years ago and my husband was very proud of the homework he'd done to match the skate bindings on the blades with my skate-ski boots.

I'd never skated on nordic blades before. I wondered how it would feel to skate with my heel free.

We lived in Anchorage at the time, so later in the day we went to Westchester Lagoon and I gave them a spin.

Gliding along on the shiny ice, freshly cleared by the municipal hot-mop truck, I realized I could go faster than most of the other skaters. Supposedly I could also navigate ruts and bumps a little more easily, due to the length and sturdiness of the blades, but the lagoon was in perfect condition so I didn't get to test that out.

The following year, I again stuck to the municipal ice. Reliable and hot-mopped, and the view wasn't too shabby either — why look for more?

Even the next year, I didn't venture outside of Anchorage. My nordic skates become my default ice skate, and with running, fat biking, skiing and hiking taking up the rest of my winter energy, I didn't bother to explore other places to ice skate.

But occasionally a photo would pop up on Facebook of friends who had discovered really perfect ice out at Nancy Lakes or Eklutna, and I would think, huh. That's what my nordic blades are really designed for. I do, after all, live in Alaska. There are no shortage of waterways. I should go try it out.

Force of habit is powerful. It wasn't until last weekend that I finally skated on ice that wasn't maintained by the city of Anchorage.

It was almost by accident. I went fat biking with a group at the Government Peak Recreation Area's single-track trails. Those trails are not flat. They climb, climb and climb until finally I'm free to careen down the beautiful switchbacks and forget about all the effort — so then I climb even more, to get to more swoopy downhills. By the time I was done, my legs were telling me all about it.

But the sun was still out. I'd grabbed my skates just in case I decided to join the crew for skating after the bike. I had a couple of things pulling me away — I needed to grocery shop, and I very badly needed to finish a few projects at home before the end of the month — but I find it very difficult to turn down more outside time on the weekends.

Skating was the afterthought activity, so I figured I would go for a little bit and turn back. Thirty minutes, tops. I had Westchester Lagoon in mind — doing laps, tiring out.

"You'll want to stay out there forever," teased a friend. She was right.

We drove to the Rabbit Slough trailhead, part of the Palmer Hay Flats State Game Refuge. The temperature dropped significantly as the fog that had been rolling in and out throughout the week blocked the already-weak sunlight. Still, the hoar frost lit up the trees at the trailhead, and the ice looked as shiny and smooth as anything I'd seen at Westchester.

I pulled on every layer I had with me and strapped a helmet on top of two layers of headbands and a hat. I also brought a pair of trekking poles, although it turned out I really didn't need them. The ice can vary significantly from day to day, but that day it was almost entirely smooth.

Then, we were off. I clambered down the side of the bank in my ski boots (the most harrowing and dangerous part of the journey) and clipped into my skates.

I apologize to anyone who may have heard me shouting expletives. It was just that amazing. I was almost kicking myself for having never tried it before — except for that this was a really, really good first experience.

Wasilla Creek is not enormously wide, but it's a significant enough channel that it felt like I was gliding effortlessly down a never-ending corridor. Instead of walls, there were frosty white trees. And instead of a ceiling there was sky — and eventually, the panorama of jagged mountains that characterize the Valley viewshed.

We seemed to go fast with minimal effort. There weren't many sounds — the routine clip-clip-clip of our skates hitting the ice and sometimes the buzzing of a fat tire bike coming from behind us.

After a while, we left the trees behind and were surrounded by the expansive hay flats, with Pioneer Peak jutting above the fog into the sky, which was slowly turning color as sunset came. We skated back. Seven miles round-trip. We had done 6.5 miles on the bikes earlier.

I couldn't believe what I'd experienced. It was stunning. We were out there for a little more than an hour, and my after-thought activity was suddenly the big news of the day. My perspective changed. A new venue for an old activity gave me the ability to see my corner of Alaska in a completely new way.