Sometimes, you go hunting because the dogs want to go 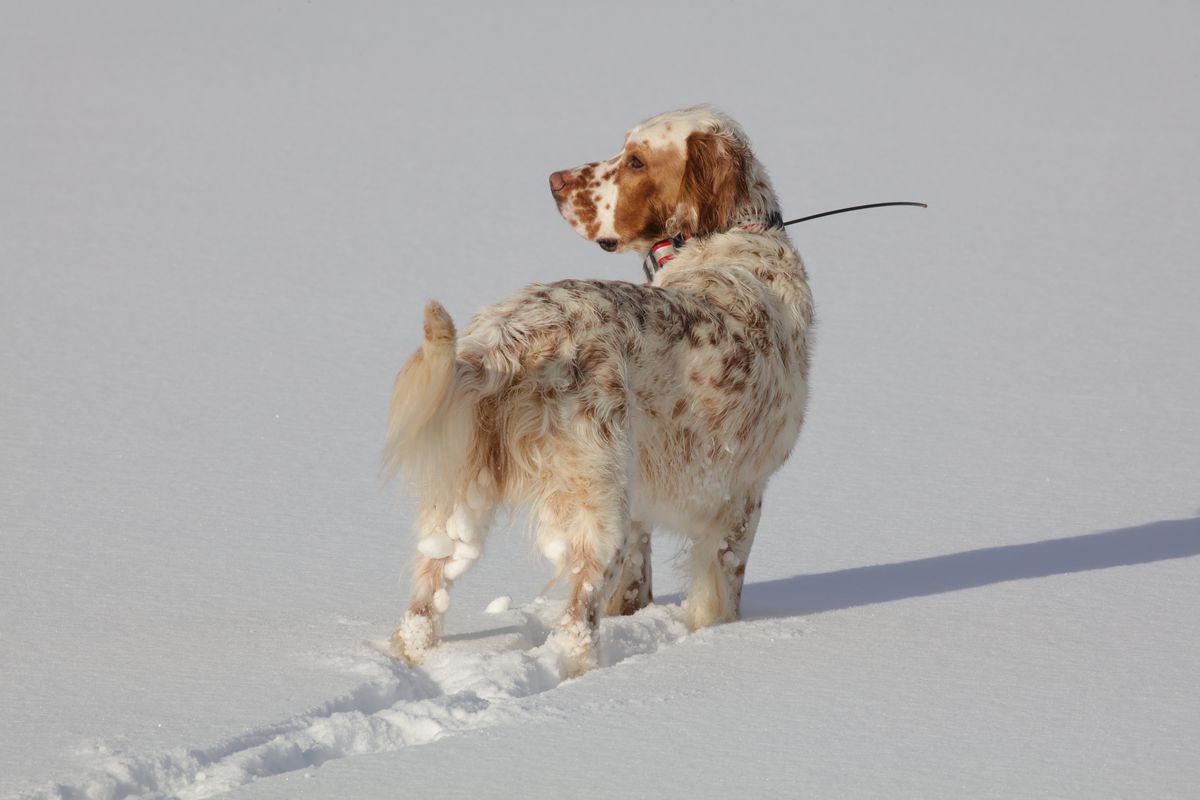 Snow balls up on Hugo’s fur during a hunting trip in Feb. 2018. (Photo by Christine Cunningham)

Snow balls up on Hugo’s fur during a hunting trip in Feb. 2018. (Photo by Christine Cunningham)

It took Steve several minutes to climb the stairs. I could hear him pause after each step. The night before we had planned to go hunting with one of the dogs with the hope that Steve would feel better in the morning.

"You look awful," I said as he stood on the last step, his hold on the handrail resembling the grip of a rock climber on the edge of a cliff. His face was pale as he confessed he had not been this sick with the flu since the winter of 1972.

Hugo, one of our English setters, sat at my feet waiting for the verdict. "Well," I said, "I already told Hugo we were going."

Hugo jumped at my words. If he couldn't hold me to a promise, he at least knew enough of the English language to recognize his name in the same sentence with the word "go."

Steve acquiesced, and the three of us drove the 100 miles to the foot of the mountains. The snow was chest-deep for Hugo. We knew the conditions were not ideal — unsettled snow collects in setter fur and, no matter how fit, the dog tires within an hour. Every sign told us not to go except the dog in the back seat, still eager and excited for the adventure.

I remembered the first time I had encountered the logic I now followed and how ridiculous it sounded when it wasn't my own.

We were in North Dakota at the edge of a field one morning. It was my first time hunting pheasant, and I had never hunted with bird dogs before. A small group of us listened to the pheasant crow as we waited for daylight. Eddie, a friend of Steve's father, was getting on in the years. "Anymore, I only go for the dog," he said.

He let Windsor, an English cocker, out of his truck and the little dog sniffed the air before leading us out to the field. It didn't make sense, I thought. I was thinking about getting a dog so that it would retrieve ducks for me, not so I would have to go hunting if I didn't want to.

That was more than a decade ago, and I pondered a different question as I followed Hugo as he bounded through snow the way an English cocker had once bounded through prairie grass with delight. My snowshoes were heavy, and Steve looked to be fighting for his life. Our mantra, "for the love of the dog," never seemed so valiant or so in vain.

Hugo made the first tracks. He broke through the soft, pure white ahead of us. We stopped to watch and for Steve to catch his breath and cough. We won't ever run so fast in our lives, I thought. We aren't capable of being so "wide open" or keenly aware of our world. Only a dog can run the way we feel we ought to. When he stopped, we'd know he'd found a bird, and our pace would become labored where the dog's was as driven and natural as any element on the mountain.

His nose stayed in the air as he ran. The warm-bodied smell of ptarmigan buried in willow patches across the valley would never halt us all of a sudden and send us in a circle to locate the exact source. We weren't hunting the same way he hunted. While he smelled and stalked, we watched and followed him.

The first time I left the roadside to hunt a field, there was so much I didn't know. In the company of wild grass and skies filled with birds or maybe just clouds, I never figured how a dog would play such an integral part. My time alone outdoors was filled with lazy thoughts and ramblings.

Back then, before dogs, I took a few photos but not more than the 24 allowed on my disposable camera. The images were often of the birds we shot. One photo showed our lonely tracks across the grass. Looking back, I see where a set of tracks are missing.

Now, the view beyond Steve's back promised us nothing but a chance at exhaustion. It was easy to say it was a dead valley, a dead end. My eyes were raw and snowblind. Instead of looking ahead, I looked at the ground, and my thoughts went back to the question of the day. Were we being foolish?

When I looked up, Hugo was on point.

In a moment, the questions disappeared as I followed the line of his point to the bird. I walked past him and, because he is still young and learning, he did not hold. We walked together, and I tapped his head to remind him to hold his point while I flushed the bird.

When I glanced up at Steve, he appeared quite healthy, perhaps as healthy as the spring of 1972.

We stopped Hugo before he crossed the creek. We let that be where our trail ended for the day. It could have gone on, but it ended there.

Before I followed bird dogs, my trails ended at a logical place — at markers or summits where it made sense to turn back. It wasn't until hunting with dogs that I learned how to know when it was worth going, worth staying at it, and when the day was over.

A hunting trail doesn't begin or end anywhere in particular. It is just followed for as long as it makes sense, and sometimes it doesn't make a lot of sense until afterward, when you're glad you went for the love of the dog.