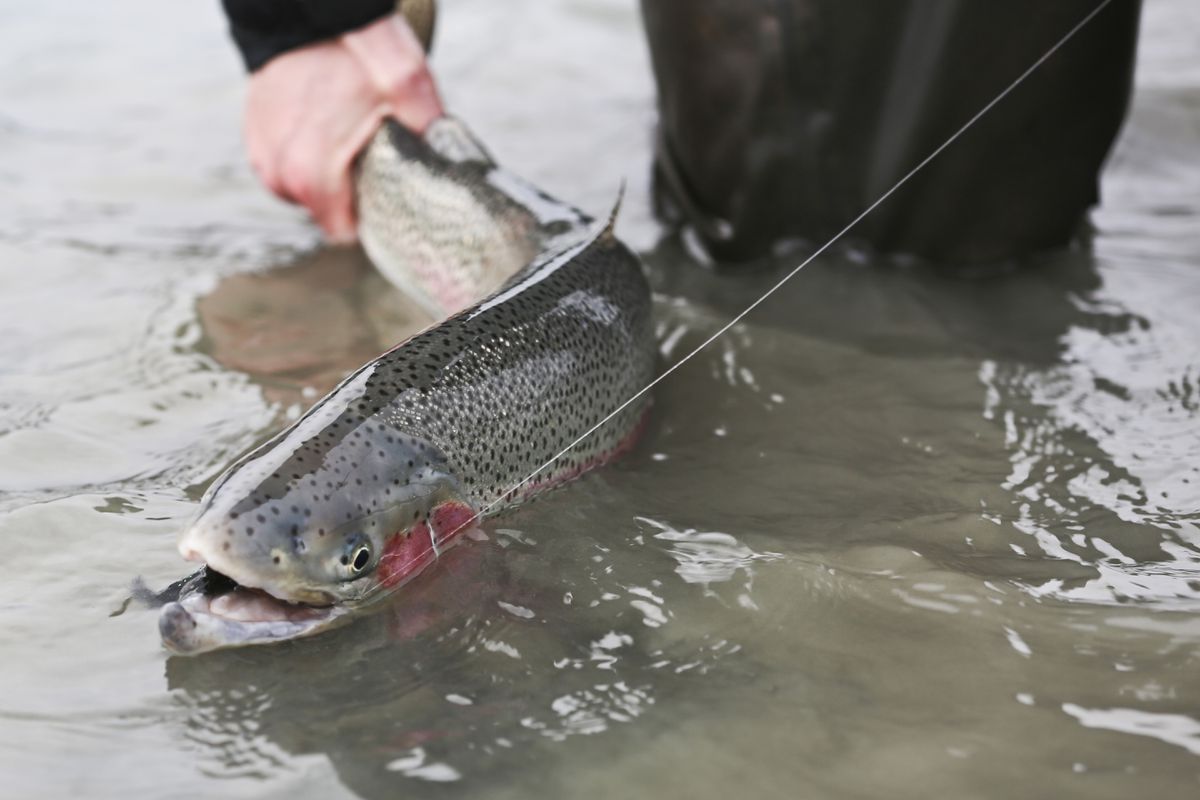 The fly line sailed out, the tiny salmon flesh-colored bead seeking a place to light above the small riffle an impossible distance out in the middle Kenai River. Back and forth the line sang as my buddy flicked his wrist, it seemed without effort, until the last of the fly line exited the reel and the fly settled into the water.

"See that riffle out there," my fishing partner had said, and then pointed to a spot an impossible distance from where we stood, "drop the fly right above it." "Maybe you should show me," I said, trying to buy time to come up with a sudden excuse, like a back spasm or I thought, I could just dislocate my thumb, anything to avoid the display of comparative incompetence that I knew would come if I attempted the cast. "You go ahead," I finally settled on, "I think I'll warm up with some coffee first."

The trip had started with a call from a friend who is a bit driven in matters of piscatorial nature. A fellow who satisfies his lust for catching fish while guiding clients on the Kasilof River, from a drift boat, during the normal fishing season. Some who know him might say that is just a warm-up for the "offseason;" if there is open water and an open season, he's out there. When the call came in early March, it wasn't a surprise. "Hey," he said, "Want to go fly-fish for big Rainbows on the Kenai?" "Sure," I replied, it was one of those things I thought about a lot but had never done.

I could feel the grin spread across his face when he told me, "It's a bit of a walk, seven miles, we'll have to wear waders to get to the spot." "Sounds good," I said, as I thought, well hell, I'm old but I can still do 14 miles in waders for a chance at a 30-inch Rainbow.

Our waders crunching across the rocks, covered in ice from the rain, freeze, snow, melt, cycle that had marked the unusually warm winter, broke the quiet of pre-dawn darkness as we headed out. We paused for a break after a couple of miles, hearing a coyote howl from the distant foothills and the answer came a few moments later. The time of year when love spans great distances through the cold morning air.

A couple miles farther along, an owl hooted from the shadows of the tall spruce trees bordering the shoreline of the river, announcing his disappointment for our intrusion into his hunting ground. Dawn was breaking by then and periodic glances back rewarded the effort when the gray ghost swooped from his forest lair and nabbed a hapless vole out of the riverbank grass.

Trudging along in my duck hunting waders, I thought, we gotta be getting close, when we rounded a shallow bend and saw a pair of the Trumpeter swans that winter on the Kenai. Their long necks were stretched out behind them, heads tucked into wings. A pair of Goldeneyes swam alongside, seeming to provide sentry duty while the big birds slept. As we approached they awoke and trumpeted their disappointment at the intrusion and rose to make their departure, running on top of the water to get airborne

Finished with the coffee, I blew on my hands as I returned to the river, steeling myself to the task ahead. Bending over to pick up my rod, I sensed something amiss and looked over to see my buddy's eight weight rod bent double as he, with great care, backpedaled to shore. Dawn had broken, enough light for photos, my rod forgotten in the scramble to capture the image of the first fish of the day.

Through the camera lens, time slows down, the images isolated, as if there is no more to the world. The rod fell into the boot deep water, the line, now in hand, followed down to the fish. Turning to me, he said, "If you want a close picture get over here now." Stepping closer, the big fish appeared in the view finder, a pair of calloused hands holding her in the current with the care reserved for infant children, as the hook was removed from her gulping jaws. Petting her, as if she were a Labrador retriever, the gentle hold allowing her freedom when she was ready.

My fly fishing experience came late in life. I had read the stories, the style and grace appealed to me. And then I saw the movie, "The River Runs Through It." I joked that Brad Pitt taught me to fly fish. But he didn't do it well, and as I walked back to my rod I didn't pick it up. I sat down and watched the shallows at my feet, where Coho salmon fought the brief current as their lifeblood flowed into the afterlife. I listened to the river while Bald eagles looked on from their tree branch perches, content to be there in the rare solitude.

As the fly line downriver started singing again, my thoughts drifted to the homage one must pay to this culture of fly-fishing. I thought, as my buddy worked the riffles, he probably taught Brad Pitt how to fly fish, and I thought, I haven't yet earned the right to a 30-inch Rainbow.

The light was beginning to fade as we closed the day hiking back. A couple of miles from our trucks, a lynx appeared in some grass along the river. His attention was focused on, perhaps a vole, as we approached. Once he saw us he moved up toward the woods and then, being the inquisitive animals they are, he sat down to watch us. Talking in a gentle voice while taking photos, the beautiful cat allowed me to approach within a couple of yards, and then he calmly walked off into the woods, his curiosity satisfied.

There is a spirit on the Kenai that draws one into her bosom, a special place, a place that draws out the best in those who care. A living thing that winds through the hearts of those who are gifted with getting to know her. A place where catching a fish comes in second place to the soul-soothing that embraces each visit to this throw back to a better time.

Steve Meyer of Soldotna is a lifelong Alaskan and an avidshooter. He writes every other week about guns and Alaska hunting. Contact Steve at oldduckhunter@outlook.com.