In Interior Alaska, snow came late and then stuck around with a vengeance 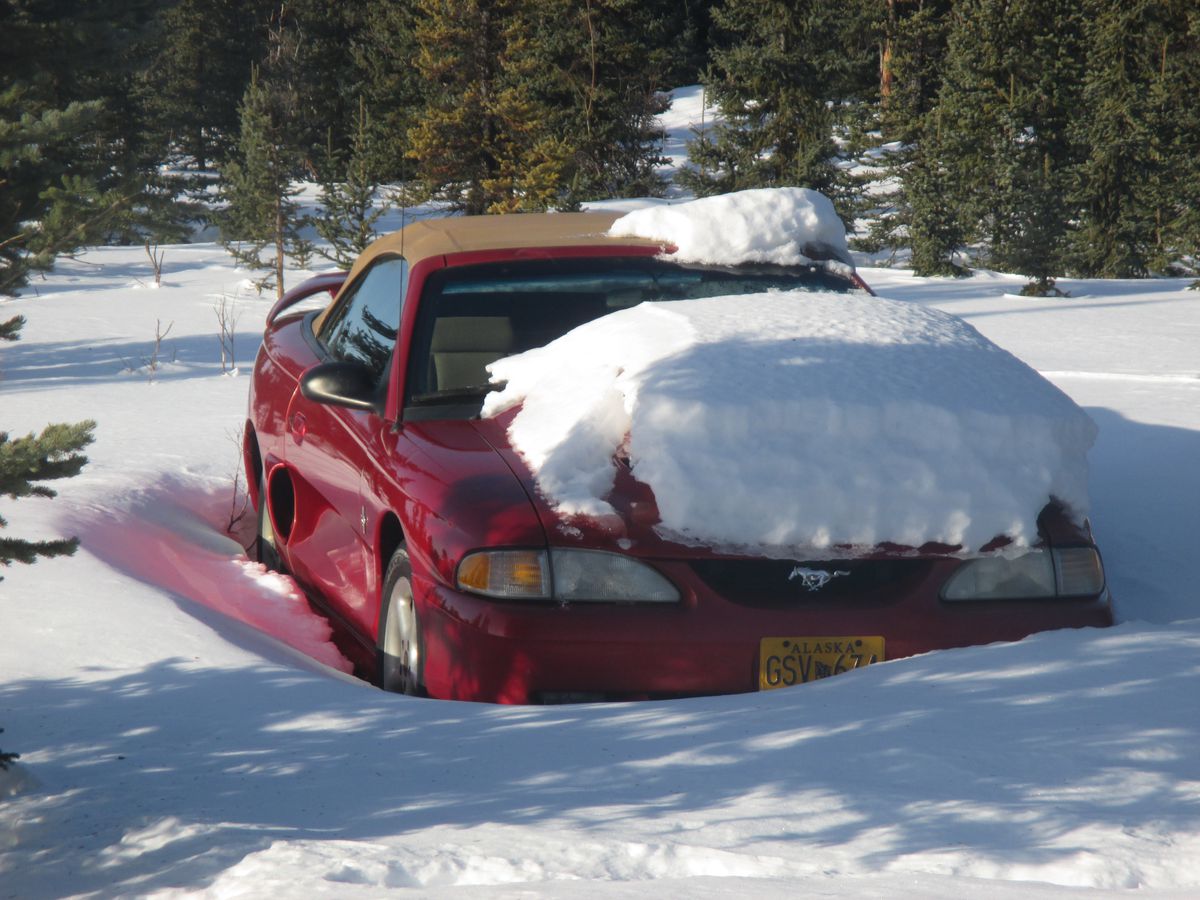 The Mustang is not quite ready for an April debut. Donnelly Flats, April 6, 2018. (Photo by John Schandelmeier)

The Mustang is not quite ready for an April debut. Donnelly Flats, April 6, 2018. (Photo by John Schandelmeier)

It is April. It isn't supposed to be 10 below. The snow buntings showed on March 18 as they always do. Trumpeter swans are at the outlet of Paxson Lake, right on schedule. I bet both of those species are re-thinking their decision to get to the breeding grounds early.

The snow came a little late this winter, but since February the quantity of white stuff has more than caught up. Delta Junction has more snow on the ground than I have seen in years. Paxson and the Hoodoos (the site of this weekend's Arctic Man) have snow cover reminiscent of the '70s.

The snow has a base in most places, thanks to a warm spell way back in December. A crust formed that is enough to hold a snowmobile or a person on skis. Frigid weather coupled with wind have settled the couple feet of powder on top of that crust. Snowmobiling is as good as it gets almost everywhere.

The conditions are good for recreation, but not so great for our wild critters. The Macomb Plateau caribou herd has been forced down from the high country and is feeding wherever they can find thin snow cover. Caribou generally prefer to dig for lichen. The best lichen growth on the north side of the Alaska Range is among the spruces at the edge of the timberline. The deep snow has been restricting caribou to the flats and open hillsides. These areas don't have great lichen growth. Most of the herd has resorted to browsing on dwarf birch. Birch is not as digestible as the preferred lichen, but will work in a pinch for the resourceful caribou.

Some grouse species may actually benefit from the extra snow depth. Ptarmigan, sharptail and ruffed grouse can now easily reach the topmost buds on willows and birch. Plus, the soft snow on top of the crust makes for easy burrowing. Ptarmigan and sharptail, in particular, spend their nights snuggled beneath a insulating blanket of snow.

The rest of the animals might not have it quite as easy. Moose are finding their movements restricted by the still-deepening snow. Paxson and Isabel Pass and as far north as Donnelly have received over a foot of new snow in the past week. My wife had her car charged this morning by a juvenile bull moose who objected to a vehicle disturbing his rest in his nice, hard-packed pull-off. Skiers, snowshoers and snowmobilers will find moose challenging them for trail rights. Plowing through soft snow burns lots of calories. Staying on hard pack trails whereever possible is critical to survival.

Predators are also struggling with the powder snow. Fox, coyotes and wolves all have relatively small feet for their weight. Wolves are having to trail. Coyotes are finding that their normal hare-hunting technique of splitting into pairs doesn't work so well in deep snow. The bunnies can move across the snow much more quickly than a lunging coyote.

The local animals may get a little thin before the snow begins its final melt, but spring is not far off, and soon the temperatures will moderate. The arriving migrants are the ones who will have it tough. Snow buntings like windblown hillsides and clear roadsides where there are grass seeds exposed. There isn't much of that. Swans need open water. Most of the lakes in the Upper Copper Basin still have their inlets and outlets locked in ice. Paxson, Tangle, Summit and Dickey Lakes, as well as Crosswind Lake, have open areas at their outlets, but the open water is only a quarter of normal for the first week in April. Feed will be at a premium.

Should the Interior geese show up on schedule, they may think about heading back south. Creamer's Field in Fairbanks only has a small plowed area open. Clearwater Lake near Delta Junction has less open water than is average at this time of year.

Normal? The last couple of seasons, spring seemed to come early. We had to run our sled dogs before 10 a.m. or we would be trudging in slush. Yesterday I broke trail with a 12-dog team through 18 inches of blowing powder snow. During the spring of 1974, Roger Butler, the foreman at the Paxson Highway Maintenance Camp, saw all of his equipment drift in to their stacks at Seven-Mile Hill on the Denali Highway. That was on April 15.

The ptarmigan, varying hares and the dog mushers may be the only ones who are celebrating this season's extension of winter. There are maybe a few bear hunters and die-hard snowmobile enthusiasts that are good with the late snow also. However, the waterfowl will find it best to stick near to the coast. The early seed-eaters such as buntings, juncos and sparrows will find better pickings a bit further south.

The rest of the wildlife … and you summer-loving folks? Hang in there — summer is coming.