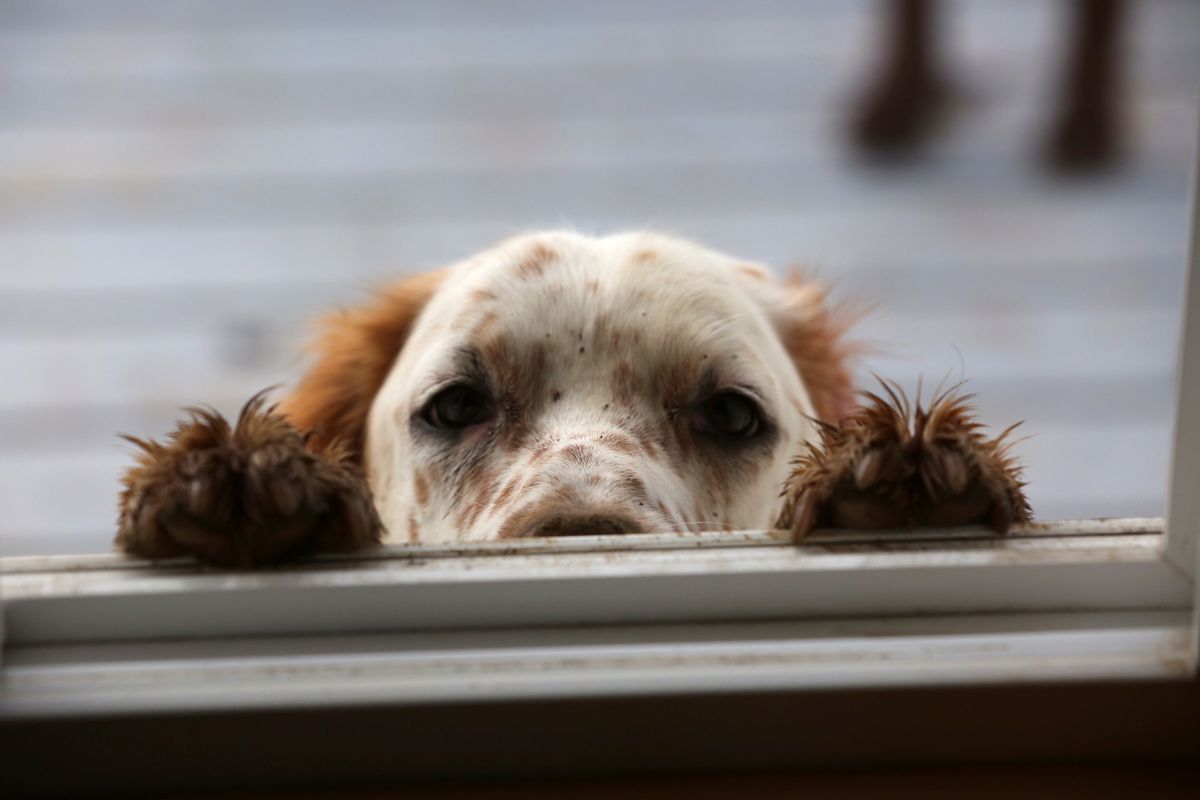 Boss peers through the kitchen window with his head between his muddy paws. (Photo by Steve Meyer)

Boss peers through the kitchen window with his head between his muddy paws. (Photo by Steve Meyer)

While at the groomer last week, the man behind the counter asked me if I took my English setter bird hunting. The short answer was yes.

"Is it hard to train them to do that?" he asked.

The short answer was no, but the answer I gave was, "Not really — down Bossy! Bossy down! — I let him do this at home, now show how well-behaved you are. All right, you're OK. I still love you. I'm not mad at you, you big fuzz head."

The moment belongs in a canon of similar moments: the time Winchester hiked his leg on the nice fisherman who stopped to chat, and I did not know how to confess what the man did not see. Or the time Cheyenne stole a retrieve from a friend's dog and then guarded it from everyone as if she had turned part rabid wolf. These were not trained behaviors, and I decline to take credit for them. Instead, I apologize for my failure to train the dog not to do something.

"How do you train a dog to point birds?" the man at the groomer asked. I wondered about my credibility to speak as an expert dog trainer. Boss had just been pulled from my arms by the groomer like a crying infant. Clearly, I was an emotional wreck and not the least bit professional.

My heart raced as I did everything dog behaviorists caution us not to do. It's dangerous, they write in books on the subject, to treat dogs as if they have human reasons for doing things.

"Does he want to smell like apples or oatmeal?" the groomer asked.

I looked at my dog, the personification of a toddler having a tantrum, and I was caught somewhere between being a furbaby's mama and salvaging what was left of my responsible dog-owner self.

I told the man behind the counter that setters pointed naturally and only needed basic obedience training. I told the groomer that Boss would like to smell like oatmeal.

And then I got out of there with what little self-respect I had left.

It's true, when bird dogs aren't proving otherwise, they are often born hunters. The longer story was that Boss was a cat born into a dog's body. He didn't want to hunt or smell like oatmeal. It was spring, he was filthy, and I was guilty of anthropomorphism.

It wasn't the first time I'd projected human characteristics on nonhuman entities. Over the years, I have assigned human motives to one or more of the dogs on a regular basis. If they have an "accident" in the house, I sometimes think it's on purpose. Only after reading about animal behavior do I realize that dogs do not think of poop as a disgusting tool of revenge.

When I go into the yard and collect poop, the dogs might think I am as fascinated by it as they are. It provides them with information and acts as a secondary food source. While I am disgusted by spring clean-up, they are running into the house with the latest news.

I do not know how to interpret this revelation. But I've learned to see their behaviors as communication rather than imagining intent.

It's difficult not to think the dogs — nine of them in total, all sporting breeds — feel guilt when they do something wrong. Some scientists say dogs only act guilty and aren't actually feeling guilt. The scientific method must be how it's possible to prove an absence of a feeling rather than believing what I see when I ask, "Who ate the pie?" Because the response is often incriminating.

When I hold up a crime exhibit — an empty package of chips or a beloved shoe, usually one of the dogs (and usually a Labrador) has bulging eyes, hunched up shoulders and a pained dog smile as she backs into the corner of the room. I think she did it.

Law enforcement officers wish solving a crime were so easy. Behavioral scientists, on the other hand, analyze data and cannot be sure a dog feels guilt. And I just have to be sure who did it.

There are other errors I make as a dog trainer and dog owner. My vocabulary is too large. I say things like, "Purdey, stop jumping up and down on the furniture with your dirty paws." She may only hear "Purdey" and wonder if it is time for a treat.

Just like people, it is possible dogs hear only what they want to hear. Even those of us with highly developed vocabularies fail to understand that when someone says he or she is "fine," he or she is not "fine." At least a dog knows when you aren't fine and has the good sense to fake a feeling of guilt.

Although there are dangers to anthropomorphism, there is also a lot to learn about ourselves from dogs. Living and hunting with nine dogs has taught me more than I have taught the dogs. They are closer to the natural world and demonstrate healthy qualities like stretching in the morning, being ready for adventure, joy for the seemingly unremarkable, and living in the present.

They find our birds, and they find their way into our hearts.

When asked how I train them to hunt, it's always difficult to tell the plain truth: I read "Gun Dog," by Richard A. Wolters. It's not the best answer. We're lucky if we find one great bird dog in a lifetime, and their lives aren't nearly long enough.

If you can discover what a bird dog has to teach you, that's one of the greatest gifts of hunting together. Actions speak louder than words. Time is an invitation to live each moment to its fullest. Muddy paws mean spring has arrived. And if that isn't really mud but something far more objectionable, we'd all rather smell like oatmeal.