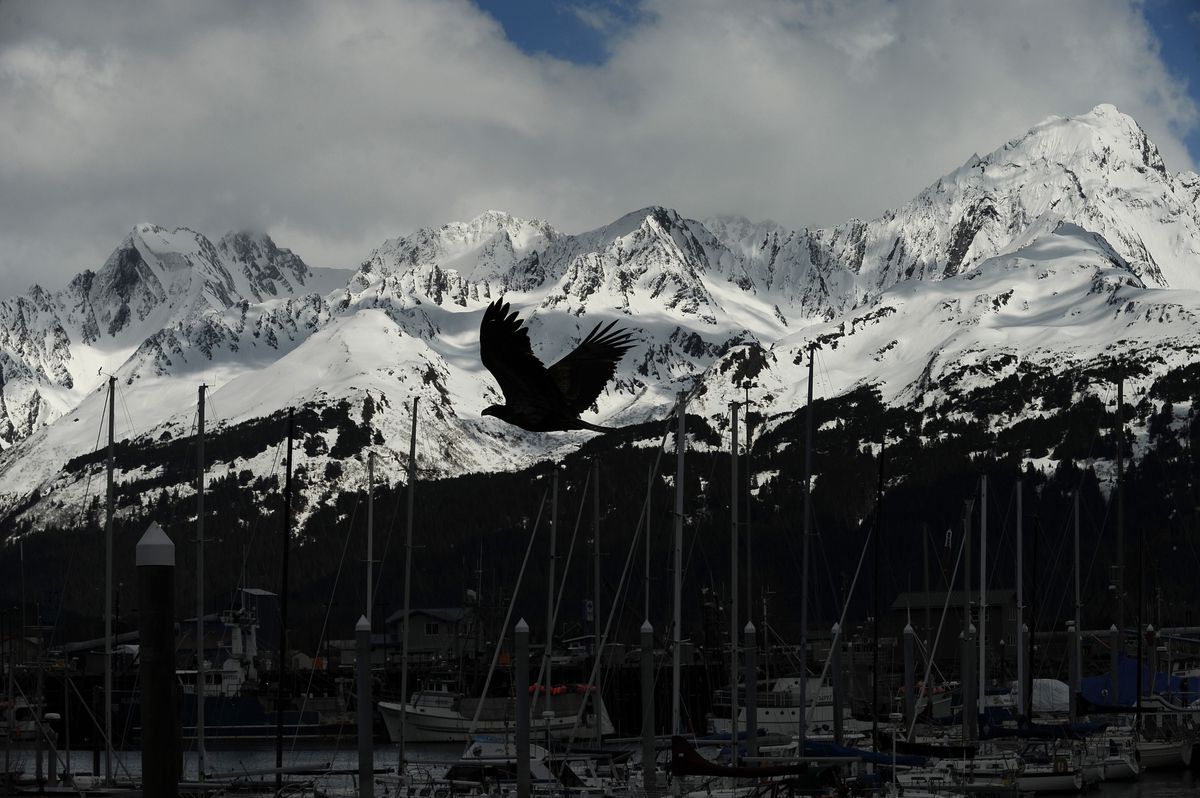 A bald eagle flies over the small boat harbor in Seward, Alaska on Thursday, May 4, 2017. (Bob Hallinen / Alaska Dispatch News)

A bald eagle flies over the small boat harbor in Seward, Alaska on Thursday, May 4, 2017. (Bob Hallinen / Alaska Dispatch News)

When you are on the waters of Bristol Bay, you are immediately aware of the bird life. The variety and numbers of avian life is overwhelming. Gulls, eagles and ravens dominate the shorelines near the processors. Out on the water, scoters, eiders, ducks, and various species of shorebirds are in almost constant view.

In today's automated, industrial economy, birds may seem to have little impact on society in general. However, this has not always been the case.

Birds have made significant contributions to society, both large and small. The Biblical reference to Noah releasing the dove from the ark in search of dry land may have been the first notable contribution. The effect the spotted owl has had on the timber industry in the U.S. and Canada is one of the latest.

Alaska beach fishermen generally dislike gulls because of the damage they cause to netted salmon. Tuna fishermen love gull species that feed on bait fish — thus indicating the presence of their target species. Good or bad, depending on one's perception, the creatures of the air are not to be ignored.

The goose, a rather unspectacular bird, has made several long-lasting contributions to society. The early days of sea exploration, especially in the Arctic, are filled with accounts of mariners following skeins of migrating geese to make a landfall. Additionally, goose feathers were the ideal quill for writing with ink. Geese are believed to have furnished feathers to sign everything from the Magna Carta to the Declaration of Independence.

Further back in history, the larger auk species played an important part in colonization and the economy of the Arctic. Birds from Iceland, Greenland and the surrounding islands were harvested in numbers for their oil, which was casked and shipped back to European markets. Eiderdown was also an important trading commodity that helped sustain early Norse trade with the European mainland.

The raven, a bird that does not necessarily find universal favor, has achieved notoriety as an evil omen in Europe. North Americans viewed the raven as a talisman, trickster and deity. Less dramatic, but no less valued in some quarters, ravens serve to aid in the clean-up of our Alaska roadsides.

Pigeons, an unwanted pest in some of our major cities, had a role in the settlement of our nation. Passenger pigeons, driven to extinction by market hunting, were a much utilized food source in the midwest. Homing pigeons, now used almost exclusively for sport racing, were used in World War I to carry battlefield messages between the front lines and headquarters.

The European starling, a relative to crows and a fairly recent transplant to American shores, causes millions of dollars in crop damage each year in the United States. Starlings, now venturing into Alaska, are beginning to displace some of our native songbird species.

Peregrine falcons, a predator at the top of the avian food chain, are responsible for one of the most dramatic shifts in farming techniques ever implemented in our country. DDT, once the pesticide of choice for American farmers, was outlawed when it was discovered that a build-up of the chemical in falcons and other birds was causing the thinning of eggshells and leading to nest failure.

The past several decades have seen an almost complete recovery of raptor populations, notably falcons and eagles. Eagles, both golden and bald, are highly visible species that capture people's imaginations.

While they are revered by most in the Lower 48, many Alaskans look upon eagles with amused tolerance. Bald eagles, termed "Dumpster Ducks" by many for their propensity for carrion, are accepted as part of the general coastal landscape.

Relatively recent history saw a bounty on eagles in Alaska. Prior to statehood, the accepted wisdom was that eagles preyed on an inordinate number of spawning salmon, thus impacting salmon runs throughout the state.

No matter how you feel about birds, they are an integral part of our daily lives. The raven thieving groceries from the back of your truck or the call of migrating swans high overhead all serve to bring our feathered neighbors to notice.

Unlike the marauding and potentially deadly grizzly, birds have been more subtle in their effects on mankind, yet their impact on our immediate lives has been far greater in the long run.

John Schandelmeier is a lifelong Alaskan who lives near Paxson with his family.