When the Brooks family ventured to the Brooks Range for a summer adventure, winter reared its head 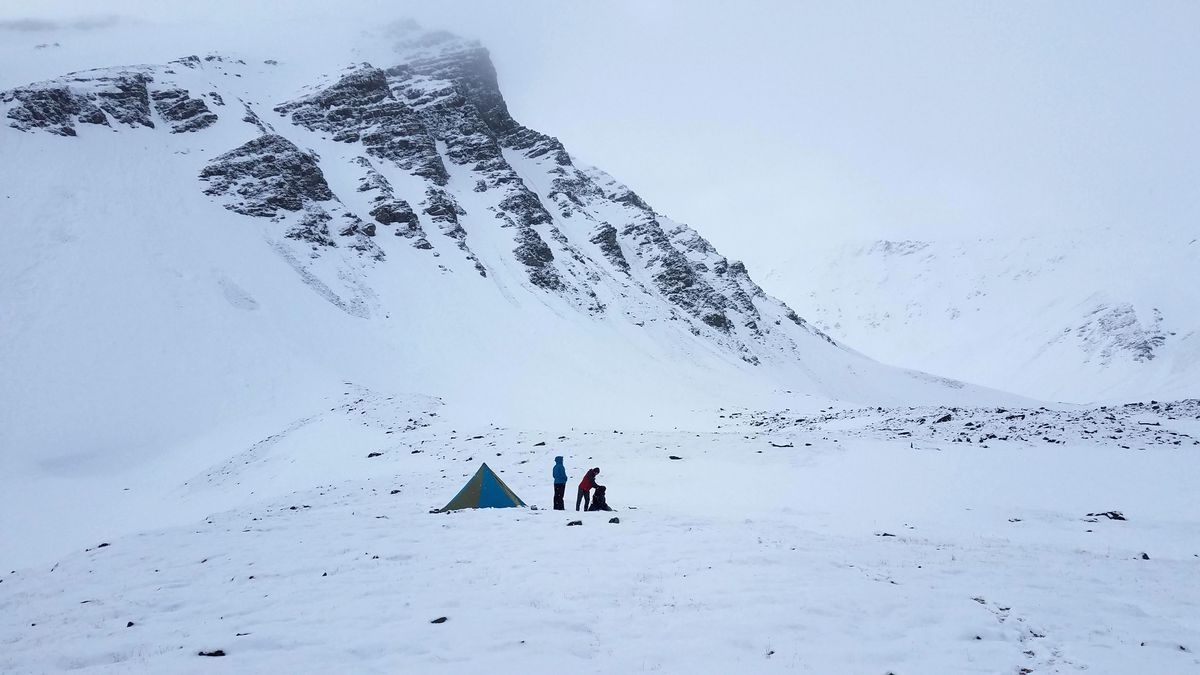 Scott Brooks and Emily Brooks are outside a tent pitched near Oolah Pass in the Brooks range. Five members of the Brooks family, including two-time Olympic skier Holly Brooks of Anchorage, made a June trek meant to be a summer trip, but was instead very wintery. (Photo by Brian Brooks)

Scott Brooks and Emily Brooks are outside a tent pitched near Oolah Pass in the Brooks range. Five members of the Brooks family, including two-time Olympic skier Holly Brooks of Anchorage, made a June trek meant to be a summer trip, but was instead very wintery. (Photo by Brian Brooks)

On June 11, five members of the Brooks family, myself included, set out for the Brooks Range north of Fairbanks. The catalyst for the event was a celebration of my dad's retirement.

A trip to the Arctic has always been high on his list of things to do, and after no fewer than 124 emails negotiating dates and vague trip details, family members from across the West Coast pulled the trigger and purchased plane tickets.

We were told that mid-June was a magical time in the Brooks, a time when much of the snow has melted but before the massive mosquito hatch. The timeline was a stretch for me — my husband and I have 9-month old twins and I was still breastfeeding.

My husband went on a 10-day trip to the Brooks Range last summer while I sat at home, pregnant. This summer it was my turn while he watched the kids. I could not pass up a rare family outing or the opportunity to find adventure, a component of my lifestyle that is important to me to maintain in motherhood and beyond.

Planning long, remote Alaska trips is a lot of work, especially when all of the other trip members live out of state. While I had seen plenty of pictures and have many friends whom I would consider "Arctic veterans," I was nervous about leading the charge.

Between a complicated pregnancy and giving birth, it had been two years since I'd even been backpacking. On Memorial Day weekend I took advantage of a 36-hour kid-less window and hiked the backside of Wolverine to sleep in my tent at Williwaw Lakes.

Thanks to high winds and a heightened sense of "bearanoia," I slept worse than a night at home with two infants. But it was a successful trip. It helped me transition from a diaper-changing, breast-pumping mindset to one of freeze-dried foods and camp stoves, which was exactly what I needed.

As the trip grew closer my anticipation heightened. Family members flew in one by one and I became distracted by the many preparatory tasks, which included buying disgusting amounts of processed food, testing stoves and studying potential routes. We drove all over town to borrow enough of the Ursack bear bags required to store food in the wilderness.

I was so distracted in my roles of expedition leader, business owner and new mom that I didn't check the weather forecast. Thirty-six hours before our planned departure I received an email from a friend which simply read, "how are you feeling about the eight inches of snow forecasted for Monday night?"

Immediately I picked up the phone to seek advice while simultaneously checking every weather forecast and FAA webcam, hoping, wishing and praying to find good news or a sign of hope.

Alas, it did not look good, and my stomach began to churn. With our point-to-point itinerary of the Dalton Highway to Anaktuvuk Pass, there were no bail-out options other than to not go. I wondered if I was crazy to leave my babies for eight days of potentially miserable conditions.

The night before our departure, we sat in a circle around the map. A palpable uncertainty was masked by determined optimism. "It can't be that bad," my brother said despite the clearly worded forecast: "A winter storm warning for snow and blowing snow means severe winter weather conditions are occurring. This will make travel very hazardous or impossible."

When we landed in Deadhorse, it was a stark contrast to the 70-degree day we left in Anchorage. It felt more like February than June. At the Deadhorse General Store my brothers bought extra socks and full-face balaclavas. The reality of our situation was kicking in.

As our shuttle climbed the Dalton Highway up Atigun Pass, the temperature gauge on the truck read 19 degrees and visibility was nearly nonexistent. My dad leaned over to me and whispered, "you know, we don't have to do this," as if passively hoping that I would be the one to call off the trip.

Thankfully, we found a different world as soon as we dropped down the other side of the pass. After 4.5 hours of bleak landscape we saw hints of green tundra. "That's the first tree I've seen since April!" our driver exclaimed.

That night we hiked a total of 100 meters and happily pitched our tents on the banks of the Dietrich River adjacent to the Haul Road.

The next morning we awoke to blue sky. It helped lure us away from the safety of the road and the familiar sights and sounds of the occasional semi-truck hauling supplies north.

Day 1 in the Arctic was truly blissful. We waded through crystal-clear rivers (opposed to glacier-fed gray ones) and saw many varieties of wild flowers. Like many places in Alaska there were mountains as far as we could see in all directions, but somehow it felt different.

I lavished the opportunity to drink straight from the rivers and streams since I wasn't actively breast feeding. I was, however, using my manual breast pump and subscribing to the "dilution is the solution to pollution" belief by dumping my breast milk into the rivers and lakes. No need to leave a trail for the bears to follow.

Life became simple pretty quickly. The object of each day was to put one foot in front of the other, and the clarity of untethered life in the wilderness felt peaceful. For a moment, it seemed like my biggest decision was how to ration my Sour Patch Kids and salted caramel chocolate.

Day 2 we awoke to big snowflakes falling on our tents. The sunshine had tricked us, and a winter storm was in full effect. Travel became arduous and I wore three layers of wool for eight straight days.

It turns out that storm was just a warmup for the big one on Day 5.

We knew it was coming thanks to our inReach GPS device. The snow made us rethink our route and we spent a day backtracking in search of lower passes and more mellow terrain.

If you've ever spent any time in the Arctic you know what a tussock is. For those who haven't, a tussock is a small, compact tuft of grass that covers huge areas of the tundra, often in wetland environments. They look like something from a Dr. Seuss book.

Tussocks are challenging to walk on, and 90 percent of the time your ankle hyper-extends one way or another when you fall off the tuft of foliage. Now imagine tussocks or talus (rock fields) covered by six inches of snow with water underneath. It felt like we were walking on a snowy, inconsistent waterbed.

In places snow drifts were mid-thigh level and our water bottles froze shut. Our hydration system transitioned to scooping water out of creeks with our camp cups as we traveled. Luckily the water, both frozen and flowing, was plentiful.

On the coldest night of our trip the temperatures dipped into the teens. With no flat or dry ground for miles, we were ecstatic to find an accessible old hunting cabin up the north fork of the Koyukuk River.

The cabin was completely dilapidated but we were thankful for it. We patched holes in the walls with extra roofing material and created a surface big enough to pitch our tent inside the structure for the night. The five of us piled into a three-person tent to keep warm. Our efforts from the night felt like a combination of Survivor and MacGyver.

I was unsettled about the conditions and the snowy pass we had to cross the next day, which was the crux of the trip. I wondered how my babies were doing and I received an inReach message from my husband that our daughter crawled for the first time. I missed them dearly but reminded myself that despite the rough conditions, this trip was good for me. My spirits rose when I found the names of friends and people I knew inscribed on the cabin wall.

The following morning our running shoes were frozen solid and a family member who will go unnamed burned their laces while defrosting their shoes over the flame of the stove.

We made it up and over the pass without too much trouble. My brother kicked awesome steps up and over a mountain, we tossed snowballs in low light for perspective to check for cornices, and we descended over a recent, large debris path. Once on the other side my nervous system settled and I felt that much closer to my babies and a hot shower.

The Arctic tested our patience, perseverance and determination. The trip was nothing like I had imagined yet rewarding in so many ways. We had stunning vistas and moments of simple silence. I reveled in being days away from civilization and in the beauty of the area, both aesthetically and conceptually.

Despite our summer foray into winter, time with family members and eight straight days outside felt sacred and special. I know I will have to return another time to experience the true midnight sun, but for the meantime I have quenched my thirst for adventure.

For at least the next few weeks, I'm more than content playing with my babies in the front yard!

Holly Brooks is a two-time Olympic skier and two-time Mount Marathon winner who lives in Anchorage with her husband Rob and their twins. She owns and operates Holly Brooks LLC Counseling, Coaching & Consulting

Holly Brooks is a two-time Olympic skier and two-time Mount Marathon winner who lives in Anchorage with her husband Rob and their twins. She owns and operates Holly Brooks LLC Counseling, Coaching & Consulting.