While pondering chicken halibut, a question nags: Where are the beef halibut? 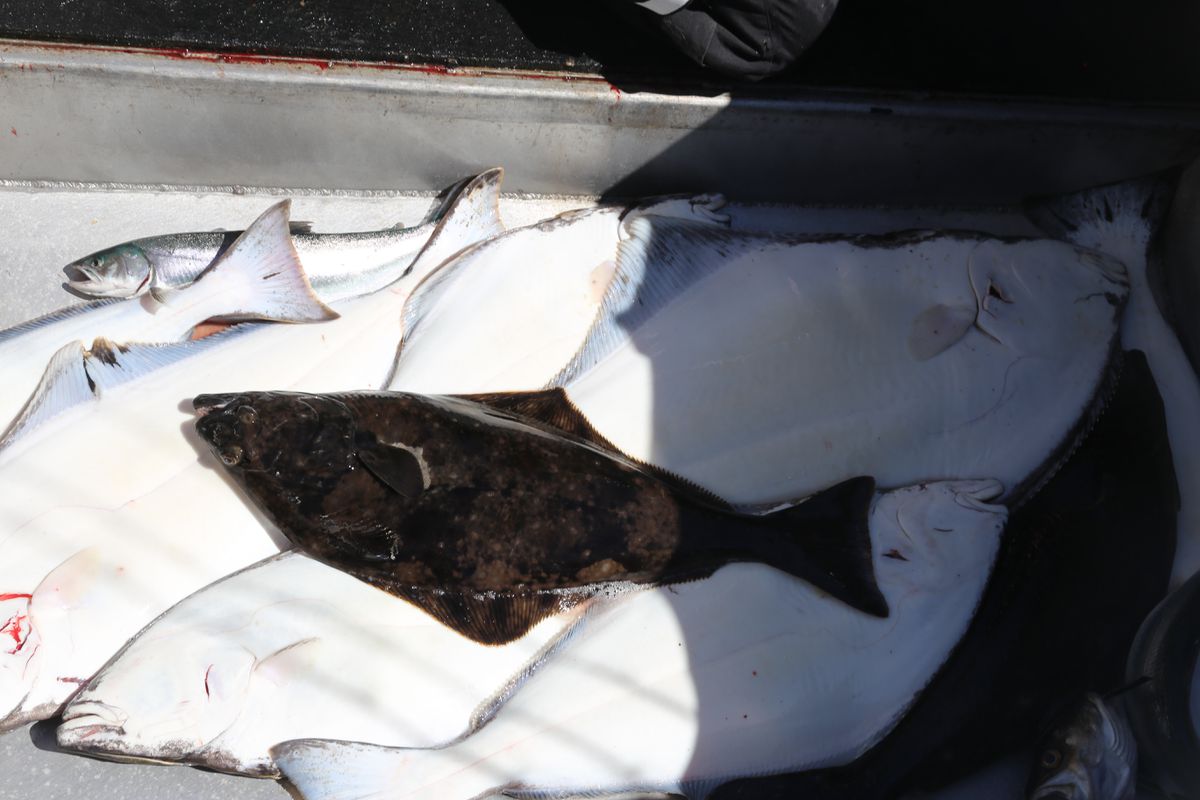 Almost every conversation I've had about halibut fishing, whether on the deck of the boat or at the office the next day, has included the word "chicken" to describe a small halibut.

The term is so common that it often goes unquestioned. Depending who you ask, it can refer to everything from a 10-pound to a 50-pound halibut, but I knew little about the origin of the term.

My first thought was that maybe they were called chickens because they weighed close to the same amount as a chicken, but chickens only weigh about five to eight pounds.

The next logical thought was that maybe someone thought they tasted like chicken. Although they have white meat, they don't taste like chicken. Besides, tuna has already claimed the "Chicken of the Sea" title.

The more I thought about the mysterious name for small halibut the more curious I became, and I found myself writing a query to the International Pacific Halibut Commission to learn if there was an official answer.

Recipes in popular Fannie Farmer and Mrs. Owen's cookbooks from the early 1900s both reference chicken halibut as being from two to 10 pounds in size. Smaller halibut brought a higher price in the New York and Boston markets. In 1987, the menu of a St. Valentine's dinner held by the Woman's Press Club at the Hotel Windsor on Fifth Avenue, New York, featured "Chicken Halibut, Diplomate."

I can only suspect that the menu item referred to a small halibut and not a flattened or sea-faring chicken.

At face value, the menu makes it clear that adding the adjective "chicken" in front of the word "halibut" was an embellishment meant to indicate a better quality product. Many today would agree, making the term "chicken" neither an insult or a colloquialism but a formal designation like "prime."

So why were so many of my prime halibut being thrown back automatically by boat captains?

The Halibut Commission published a technical report in 1970 stating, "Halibut between five and ten pounds are designated in the market as 'chickens,' those 10 to 60 pounds as 'mediums' and over 60 as 'large.' The halibut in the weight group over 80 pounds are sometimes known as 'whales.' Weights are head off, dressed or eviscerated."

While it was interesting to learn the early marketing description of small halibut and confirm the more subjective use today, my real interest remained — why use the word "chicken?"

My contact at the Halibut Commission provided two theories similar to mine. First, the small size indicated the size of a chicken. Second, the word "chicken" may refer to the young age of the smaller halibut ("chicks").

These answers lacked certainty and, while fishing for halibut, I pondered the definition of chicken halibut again as my line began to pull with the horsepower of just such a chicken.

I waited a moment to allow it to eat part of my bait before reeling. This was not a big fish. It was not a "shooter," as they call the ones so big you've got to shoot them (at least that makes sense, even if the smaller ones are not called "step-on-its").

The fish on my line was not a "barn door" halibut, a term that is, at least, apparent to anyone who has hooked onto an actual barn door 300 feet under water. Yet, there are no comparable door-terms for other fish sizes such as "house door" or "dog door."

The fish on my line was a head-shaking little chicken. It was a cockerel. It was a featherless fish. It was a halibut weighing about 20 pounds. Only it wasn't. It was a 10-pound halibut. I frowned when the captain told me that it was not a "keeper" and watched as he threw my little flatfish back into the ocean.

That is not what the ladies of the circa 1987 Woman's Press Club would have said, I thought.

"There's a lot of chickens out there," the captain said. "And maybe some turkeys."

This is getting ridiculous, I thought. Before we even have a clear understanding of where the term chicken halibut comes from, we've got turkey halibut. I shook my head. At least it was analogous.

"More like a Hungarian partridge," someone shouted from across the deck.

"I'm going to catch an ostrich," someone else said.

An ostrich isn't even a game bird, I thought. Not in Alaska, anyway.

When we weren't misappropriating poultry, we discussed fishing regulations. Since we no longer had a sea-worthy boat, we followed the regulations for charter halibut fisheries, which gave rise to new terms for halibut by size — "overs" and "unders."

I have to admit, "Under Halibut, Diplomate" does not sound impressive on a menu.