For this Alaska hunter, happiness is a .375 H&H in the gun safe 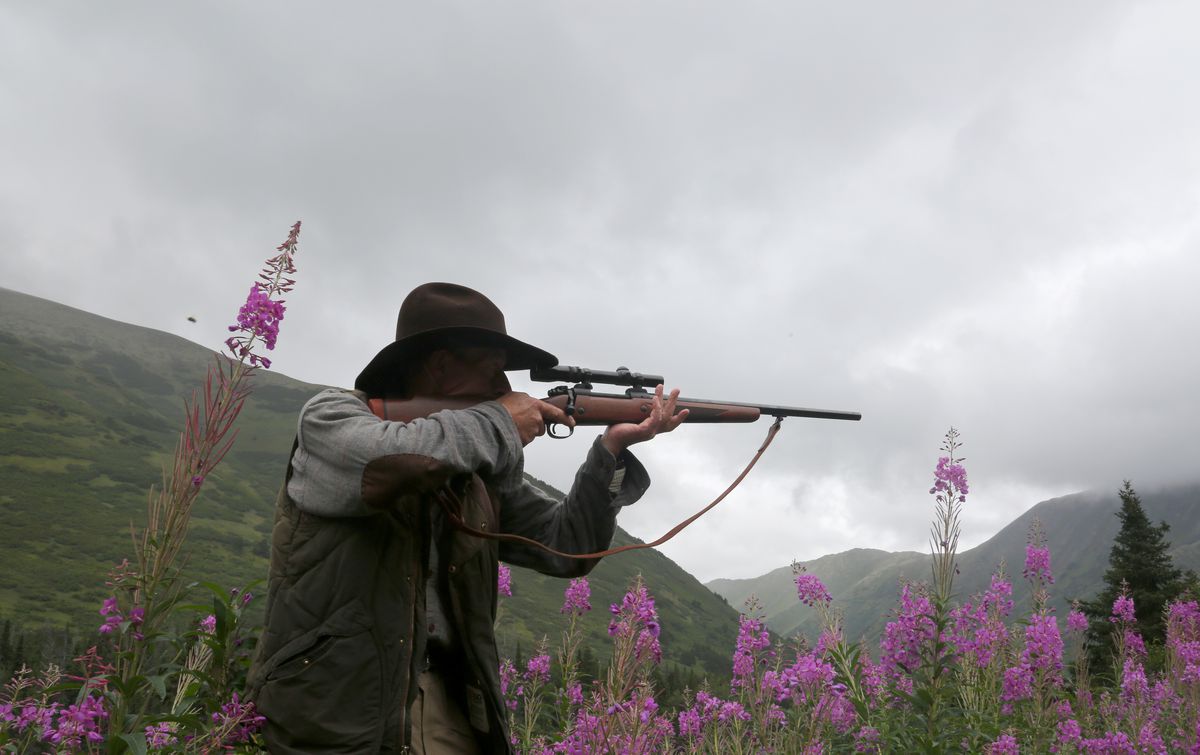 After a 20 year hiatus from the caliber, Steve Meyer is pleased to be shooting a .375 H&H again. Shown here in the Kenai Mountains in August 2018. (Photo by Christine Cunningham)

After a 20 year hiatus from the caliber, Steve Meyer is pleased to be shooting a .375 H&H again. Shown here in the Kenai Mountains in August 2018. (Photo by Christine Cunningham)

Never having been the type who throws objects in temper tantrums, it took a moment for my sensibilities to process that my hunting partner had just thrown his shotgun into the shallow brackish water pond, where we were hunting ducks.

My partner was new to wing shooting and things weren't going so well for him. He had just finished emptying his 12-gauge pump for the seventh time, without disturbing a feather, while I had a limit of mallards, widgeon and pintails.

"Duck hunting is stupid," he said. "If you want that damn gun you can have it."

To that point in my life, the thought of doing such a thing to a firearm was unconscionable. Then some years later I bought the .375 H&H (Holland and Holland) that had me ready to take a hacksaw and an ax and cut it into small pieces.

I had a thing for the big British cartridge that Holland and Holland had introduced to the hunting world in 1912. Its popularity, first in Africa and Asia, with visiting hunters and professionals, grew rapidly.

When Winchester introduced the M70 chambered for the .375, it gained favor with Americans going on safari in Africa and with the grizzled Alaskans who guided hunters seeking brown bear trophies.

Hunting stories were resplendent with reference to the long, smooth-feeding cartridge, and its performance on game. In my youth I fell in love with the idea of having one for the day I would go to Africa or hunt brown bears in Alaska. When I was able to afford one, the love became real.

In those days I was trying to learn about the various hunting rifles available in the caliber, and I had owned a half dozen. The commonality in these .375s was their accuracy. Every one of them would shoot into 1.5 minutes of angle, some much better.

When I bought the used .375 that almost drove me to the saw and ax, there was no fear that it wouldn't shoot well.

When I saw the ad for the rifle posted on a bulletin board, I grabbed it and went to the nearest phone. When I met the old fellow selling it, the gun was as described.

It was a semi-custom rifle built on an FN Mauser action, with a three-position safety installed on the bolt sleeve, a medium heavy barrel, stocked in English walnut that was straight-grained from the ebony forend cap, through the sweeping pistol grip, into nice feathering in the buttstock. It appeared as though it had never been in the hunting fields.

The owner told me he had bought it from a guy down south before moving to Alaska. His intention was to hunt brown bears with it.

When I asked him how it shot he replied, "Well, it goes off, I know that much."

He handed me a box of Winchester 300 grain Silvertip cartridges and said, "There's one missing out of this box, I shot it once and never wanted to shoot it again."

I mounted a scope on the rifle and headed to the range, knowing the rifle would be accurate. I was excited that I found the perfect .375.

The first three-shot group, with the .300 grain Silvertips, was a bit under six inches. Whoa, that can't be right. I double-checked the action screws and scope mounts, with the same result.

The barrel looked fine, as did the muzzle crown, but I scrubbed it out with copper fouling remover just to be sure. No improvement.

The action and barrel fit to the stock appeared to be fine, but it is hard to tell just looking, so I bedded the action in Bisonite and free-floated the barrel. No improvement.

The scope was new, made by a reputable firm, but I was running out of options and getting frustrated, so I put another scope on it and got the same awful six-inch groups.

Then I thought maybe it was me, maybe I had developed a recoil-sensitive flinch. I took my .458 Winchester Magnum out, shot a couple of 1.5-inch groups. That's when I started thinking about the hacksaw.

In a bit of irony, the hacksaw sort of solved the problem. The rifle had a 24-inch barrel, which is longer than it should be for the cartridge and the intended use of the rifle. Barrel harmonics are critical to accuracy and on the rare occasion, can present the problems I was having.

Subsequent to cutting the barrel to 21.5 inches, the rifle shot into an acceptable 1.5 inches. I had my keeper .375 H&H, but the pleasure was short-lived as it burned up in a house fire not long after that.

By the time the rifle burned up, my thoughts of going to Africa were all but gone, so I didn't replace it until this year.

It had been a while, and this spring Christine and I decided it was time to put some big-game meat in the freezer. The deer population seems good in Kodiak and thus, we are headed there in October. My intent was to take my .270 Weatherby. Christine would take her .300 Weatherby.

But, we hunters who are also gun folks and history buffs tend to throw some aesthetic value to some of our hunting. The last time I had gone deer hunting in Kodiak, I had taken a .375. I had other rifles perhaps better suited to deer hunting, but it just seemed proper to take a .375 then, and it still does.

I suppose you have to be that person to understand. For example, if I was to ever draw a bison permit it would be unacceptable for me to hunt one with anything but a Model 1885 Winchester, a Sharps (both single shots) or an 1886 Winchester lever action chambered in .45/70.

It didn't take long to find a used, blued steel, wood stocked .375 H&H. I cut the barrel to 22 inches and, as expected, it shoots great — good enough that restocking it in English walnut and installing a barrel band front sight with a quarter rib and express sights may be a winter project. If nothing else, it'll be terrific inheritance material for my grandson.

It'll sound silly to all but the few who understand, but having a .375 H&H in the gun safe fills a void that I hadn't realized I had. It's good to be back.

Steve Meyer of Soldotna is a lifelong Alaskan and an avid shooter. Contact him at oldduckhunter@outlook.com.