Fall in love with the Denali Highway — 134 miles of beauty, history (and gravel) 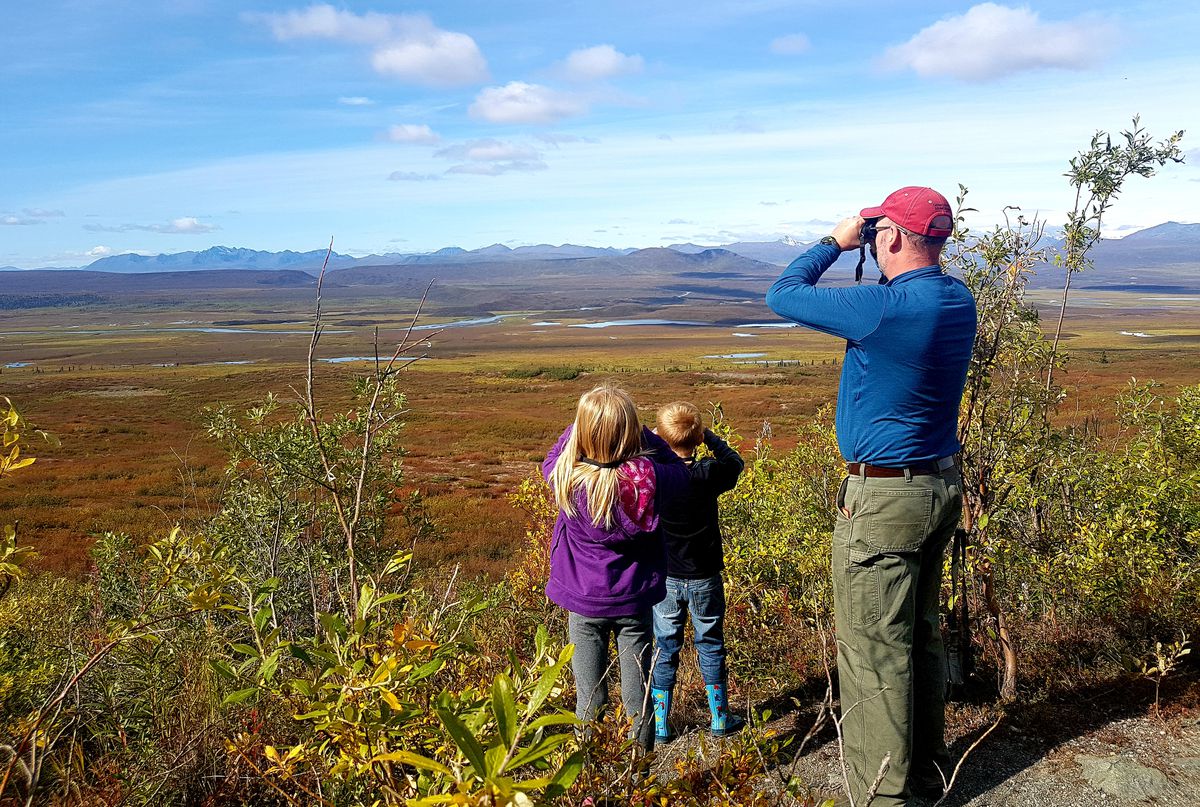 Denali Highway vistas are the perfect place to scope for wildlife. (Photo by Erin Kirkland)

Denali Highway vistas are the perfect place to scope for wildlife. (Photo by Erin Kirkland)

One of Alaska's finest attributes is its ability to wow residents, and that's no small order. Those of us privileged to live here see amazing things every day as part of the colorful landscape of wildness found only here.

So when our family planned a Labor Day weekend road trip across the Denali Highway, we knew it would be beautiful. What we didn't know was just how much this unpretentious gravel road would capture the very essence of who we are as Alaskans.

Stretching 134 miles between Paxson and Cantwell, the Denali Highway is, like most major construction projects in Alaska, a years-long result of manpower and machine. The road itself may have opened in 1957, but its route goes back centuries, tracing the patterns of early humans and animals.

While walking the trails around the Bureau of Land Management's Tangle Lakes Campground, we talked about those early hunters and gatherers and what they might have seen trudging the tundra in search of food.

From atop the rises of earth serving as vantage points (and excellent berry patches), we could see smaller kettle lakes across an expanse that probably hasn't changed much in the past 9,000 years. It was a heady realization for the kids in our group to stand among virtual footsteps of Alaska's early humans.

A more modern history of the Denali Highway begins as much of the territory did — in search of gold. Eager miners blazed their own trail in the early 1900s near the Susitna River toward Paxson, today's official starting point for the highway itself.

But the Denali Highway's real progress started when Alaskans began pushing for an easier way to access to what used to be called Mount McKinley National Park.

Before 1957, the Alaska Railroad held access to the park close. Visitors were limited to those who could afford train fare and an overnight stay at the railroad-managed hotel (some people even loaded their cars onto the train in order to be able to drive the Mount McKinley Park road). In the 1930s, Alaska's territorial and National Park Service officials conferred and agreed that a road would increase access, and thus tourism.

Although World War II stymied initial efforts to begin construction, by 1950 two crews began breaking ground for the new "Paxson-McKinley Park Road," working toward each other from Cantwell and Paxson. On August 5, 1957, the passage now known as the Denali Highway opened to the public. Almost immediately, tourism numbers began to rise exponentially, from a mere 5,000 in 1956 to 25,000 by 1958.

Sixty-one years later, we made a left turn off the Richardson Highway in Paxson and began our own journey to trace one of the most scenic drives in Alaska.

Travelers of the Denali Highway have two options for their traverse: heading east from the Parks Highway in Cantwell, or going west from the Richardson Highway in Paxson. If a mile-by-mile interpretive trip is important to your family, consider starting from the latter, known as the official historical start, according to the Bureau of Land Management field office in Glennallen.

The Denali Highway is generally open to vehicles between mid-May and mid-October, according to the BLM, but like many remote Alaska locations, snowfall is the deciding factor for opening and closing the roadway.

From Paxson, the first 21 miles of highway are paved to Tangle Lakes Campground, a 50-site property with access to boating, fishing, berry-picking and hiking.

Gravel becomes the primary surface for nearly the entire length thereafter, so drivers, particularly those with little experience navigating washboarded, potholed roads, should be wary. The recommended speed limit is 30 mph and we heeded this warning, which also allowed us to take in the glorious panorama unfolding around us.

The route quickly climbs from boreal forest near Tangle Lakes to tundra and taiga within the Alaska Range foothills, reaching Maclaren Summit at an elevation of 4,086 feet, where we watched hikers and hunters depart in search of their quarry, photographic or animal.

We made the summit our campsite one night, setting up in one of many roadside pullouts along the entire highway. Our RV windows looked out over Maclaren River, beaver lodges and the vibrant reds and yellows of a changing season. The adults picked blueberries, crowberries and lowbush cranberries; the kids built forts, played hide and seek and peered through binoculars for wildlife. We became part of this place, gratefully intertwined with what it gave us, and no one wanted to leave.

We arrived at Brushkana Creek near Cantwell the next afternoon, settling in with other happy highway travelers and moose hunters eager to share experiences and make plans for next time. And there will be a next time.

When to go: The highway was still open last week, but fall is here and snow could fall any day. Check the Alaska State Department of Transportation (dial 511) for road status.

Driving distance: The Denali Highway (Route 8) is 134 miles long from Paxson to Cantwell. A loop trip from Fairbanks is 436 miles using the Parks and Richardson highways; and a loop trip from Anchorage along the Glenn, Richardson and Parks highways is about 600 miles.

Where to stay: Camping is by far the most popular (and most affordable) way to overnight along the highway, but three lodges offer accommodations for families: Tangle River Inn (milepost 20), Maclaren River Lodge (milepost 42), and Alpine Creek Lodge (milepost 68). Those choosing to camp should be aware that fresh water is not readily available except at Tangle Lakes and Brushkana, and gas is only available at Cantwell (we filled up in Glennallen before driving to Paxson).

What to bring: There are very few services along the highway. Pack food, water, warm clothing (including rubber boots, hats, gloves and rain gear), a first-aid kit and basic tools in case of a breakdown. There is no cell service between Paxson and Cantwell, so drivers must be prepared for all emergencies.

The Bureau of Land Management website includes road and interpretive information plus insight about campgrounds and roadside camping.

The Milepost provides information about the road and accommodations.

History buffs will enjoy reading Crown Jewel of the North: An Administrative History of Denali National Park and Preserve by Frank Norris.

Erin Kirkland is author of the Alaska On the Go guidebook series and publisher of AKontheGO.com, a website dedicated to family travel.