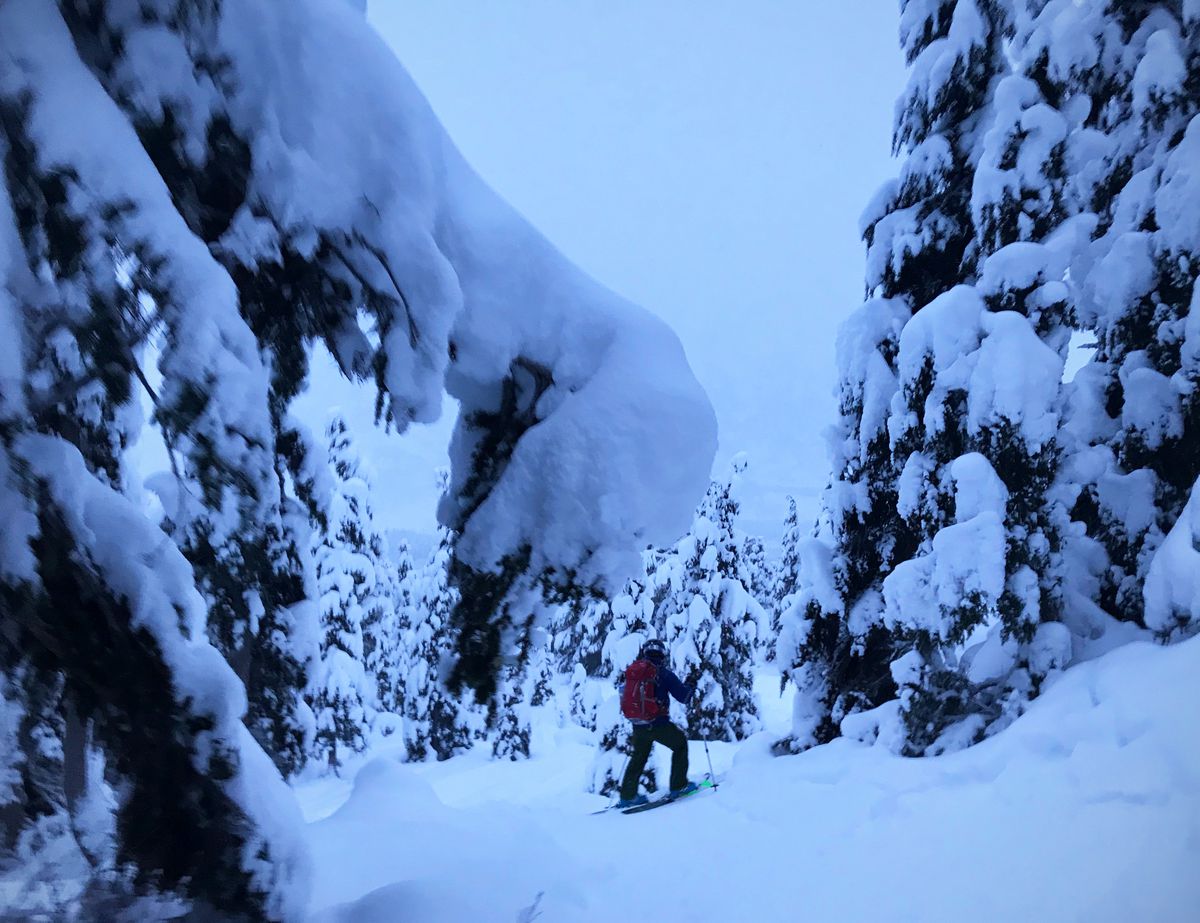 Mike Argue skis in the trees at Tincan Peak at Turnagain Pass late in the afternoon on Dec. 14. (Vicky Ho / ADN)

Mike Argue skis in the trees at Tincan Peak at Turnagain Pass late in the afternoon on Dec. 14. (Vicky Ho / ADN)

That’s my best approximation of one of my favorite winter sounds: an adhesive backcountry skin being ripped off alpine touring skis. That sound means I’m done skinning uphill, and I’m ready to cruise down through the fluff — hopefully it’s fluff, not ice — until my thighs burn and my face is tired from smiling.

Who knew one sound could contain the promise of so much joy?

The dump of snowfall over the last week has me praising the mountain gods and making ski plans on my days off. It feels like we’ve gotten a late start to the season, but now things are back on track. Alyeska Resort is open for top-to-bottom skiing. Arctic Valley Ski Area opened Saturday to skiers and snowboarders. Turnagain Pass got a whopping 4 to 5 feet of snow overnight Wednesday. There’s considerable avalanche danger there and ongoing slide activity at Hatcher Pass, but once the snowpack stabilizes, the riding should be the stuff dreams are made of.

The most memorable winter moments aren’t always the bomber days spent skiing long and hard, though.

One of my favorite memories from last season was at Hilltop Ski Area, where I was teaching good friend Andi Schweers — part of the group on our trip to the Arrigetch Peaks this fall — how to downhill ski. We took it easy, going more pizza than french fry for the first part of the day on the bunny slope. But by the time we left, Schweers was just making parallel turns.

On one run, she managed to stay in control and ski down the steep pitch at the bottom of the slope without falling — a first.

I couldn’t contain my excitement. “Oh, my God, you beautiful nerd! You did it!”

People nearby heard me and laughed. I felt like a proud ski mom, though, and was too happy to care.

[‘The tallest Polar Cub’: My life as a 28-year-old Junior Nordic skier]

In March, my buddies and I embarked on a ski trip to remember. We rented an RV so we could chase the snow where we could find it. On a snowmachiner’s recommendation (“There’s 9 feet of snow in Paxson!”), we drove our tank of an RV up the Richardson Highway to ski in the Alaska Range.

We realized upon arriving that while there may have been plenty of snow, it was topped with a hard, wind-packed crust that only got worse with each passing day. Wind gusts would slam into the RV, which shuddered through the night.

The skiing was gnarly, and not in a good way. Some of us spent more time with the shot-ski in the back of the RV than on actual skis.

In the meantime, friends told us that there was good skiing back in the Talkeetna Mountains, less than two hours from home. So we sighed, packed up the camper and started driving.

The irony of leaving Anchorage to chase snow near Paxson, only to end up at Hatcher Pass, was not lost on us.

I wish I could say the skiing was good when we reached Hatcher Pass on the last day of our trip. But our track record of getting shut out of good skiing would only continue.

The snow was soft and divine as we skinned up Marmot Mountain. By the time we had transitioned for the downhill, though, the sun had dipped beneath the ridgeline. Plummeting temperatures set an ice crust on top of the slush.

I’ll never forget what skiing that felt like. My skis would sometimes glide on top, sometimes break through the crust as my ankles chattered through a trail of ice chunks. All of this did not make for graceful skiing. I laughed hysterically each time the inconsistent snow conditions caught me off guard and sent me tumbling downhill. (Mercifully, I wasn’t the only one.)

Winter is a time of celebrating traditions, especially around the holidays. It’s the time of year to be surrounded by friends and family, reveling in the cheer of this magical season. Some traditions, like a love of downhill skiing, are ones we pass on and share with others. Some, like getting skunked on your annual ski trip, are ones we’d rather forget.

Whether you’re a rookie making your first turns or a first-tracks powderhound on dawn patrol, I hope you have a safe winter filled with good snow, mountain joy and plenty of friends willing to laugh with you — no matter what the conditions.

Vicky Ho is the deputy editor/online at the Anchorage Daily News. An avid hiker and skier, she’s also a mediocre runner and terrible biker. Have a story to share for Cautionary Tales? Contact her at vho@adn.com, or follow her on Twitter @hovicky or Instagram @hovcky.