The appeal of ice is undeniable, but watch out for overflow 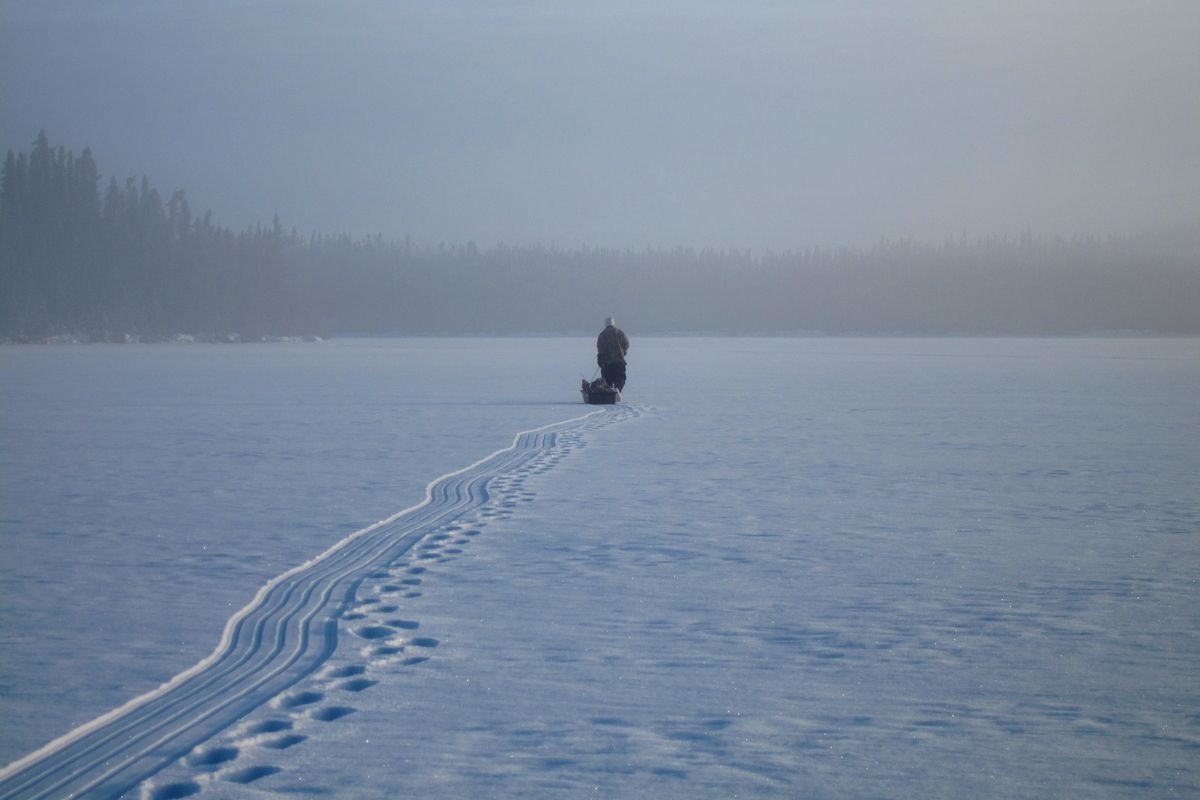 The peaceful allure of back country ice travel. (Photo by Christine Cunningham)

The peaceful allure of back country ice travel. (Photo by Christine Cunningham)

The afternoon cloud cover of the day before had left a 3-inch blanket of white powder across the Southcentral Alaska landscape. The clouds moved south early the next morning, and the low-rising sun of mid-December cast shadows in the imperfections of the sparkling snowfields that lay before us.

Christine and I followed a creek that wound through stands of stunted black spruce. We were there just because, but the dogs were home, because trappers used the area we hiked.

The creek was slow-moving in most places, but intermittent fast water defied the cold and contrasted with the ice and snow on the slow flowing sections. The weather had been the sporadic freeze-thaw we’ve grown accustomed to, and thus we hiked the creek bank, steering clear of the suspect ice.

A couple of miles in, the creek expanded in a sweeping bend, and as we came around the corner, highlighted in shadow were brown bear tracks crossing a wide expanse of snow-covered ice. The tracks emerged from the brush on the other side of a wide spot in the creek and came across to our side before heading down the frozen stream.

The size of the tracks suggested a bear well into maturity, probably a restless old boar, not ready to go to sleep for the winter, or maybe he hadn’t accumulated the needed fat to winter over and was still looking for food.

We followed the tracks, holding to the bank, which wasn’t the easiest walking, choked in low brush such as it was. After a bit, Christine decided that if the ice could support a full-grown bear it could support her, and she stepped down onto the snow-covered ice to follow the tracks.

Ice presents itself with subtle seduction. Who can resist the peaceful beauty of a frozen lake blanketed in unblemished powder? Maybe that’s part of the allure, the human condition seemingly bent on making all that is beautiful our own. Turning to look at one’s trail after crossing a frozen lake, your tracks the only evidence that anyone has been there, seems to satisfy in an inexplicable way.

The practical aspect of ice travel — the ease of traversing a flat surface with no obstructions to impede one’s progress — is inviting. What better way to cover distance in the backcountry, be it on skis, snowshoes, dog sled or snowmachine? Travel is much faster than breaking trail through brush and over hilly terrain.

For the uninitiated, the seduction beckons and life seems near perfect — until you hit overflow.

Ice, whether on a lake, river or creek, has cracks. With temperature changes, the ice expands and contracts and creates these fissures. The unnerving cracking sounds you hear out on the ice is the result.

Ice is also flexible, which sounds stupid, but it’s sort of like a half-inch steel rod that’s a foot long and does not bend, and a 10-foot rod with the same half-inch diameter that bends with its weight. A heavy snow load sinks the ice in places, and water comes up through the cracks. This overflow creates a slush beneath the perfect surface of snow cover.

The snow cover insulates this water. Depending on temperature, depth of snow and amount of overflow, there may be a crust beneath the snow that holds a person on snowshoes or skis, or even a snowmachine.

Or not, and that’s where the trouble starts.

More than a few snowmachines have had to be abandoned when caught in extreme overflow conditions. Sometimes you won’t know overflow is present until you start drilling a hole for ice fishing. After you’ve drilled an inch, suddenly your auger falls through the column of overflow. That instant between breaking through and the auger hitting the hard ice below can be a bit unnerving.

Overflow seems to occur almost anywhere there is ice and water, and it usually doesn’t encompass an entire lake and can be avoided when you find it. Unless it happens to be where you want to ice fish.

Creeks have a special sort of deception. If a hard, early freeze occurs when the water is still high from fall rain, the creek freezes over and the water level drops, often leaving a very thin layer of ice. A sign of this appears when the middle of the creek has a sunken look. The middle ice has settled, leaving the edges with thin, dangerous ice.

There’s a saying that suggests good judgment comes from experience, and a lot of that comes from bad judgment. With ice, that seems to be the way most of us learn and hopefully live through. It would be an impossible task to describe all of the pitfalls one might encounter during ice travel.

When Christine stepped on the ice to follow the bear tracks, we had been suspect of the ice, but a full-grown brown bear had negotiated it just fine, and anyone might believe it safe to follow the tracks. She had gone maybe 10 yards when she stepped into, and right through, a bear track. Down she went, one leg submerged in the freezing cold water below.

Fortunately for us, the temperature was mild and we were only a couple miles from the truck. Christine wanted to keep going to see if there were swans on a stretch of the creek that always stays open. There were, their pretty white faces covered in the bottom muck from where they were diving to feed.

Turning to head back, and wanting to be sympathetic, I said, “How’s your foot?”

My level of sympathy didn’t allow missing an opportunity to tease her about falling through ice that had held a 1,000-pound animal:

“That’s good. So I haven’t said anything, but it appears you’ve put on a few extra pounds.”

Of course, she hadn’t, and it took her a moment to realize the joke. When she did, she made sure to point out the time that had passed since the bear had come through, and that it was a good thing scales weren’t made of ice.

Steve Meyer is a longtime Alaskan who lives in Kenai and is an avid hunter.