When it comes to hunting ‘trophies,’ it’s about the personal reward, not the national award 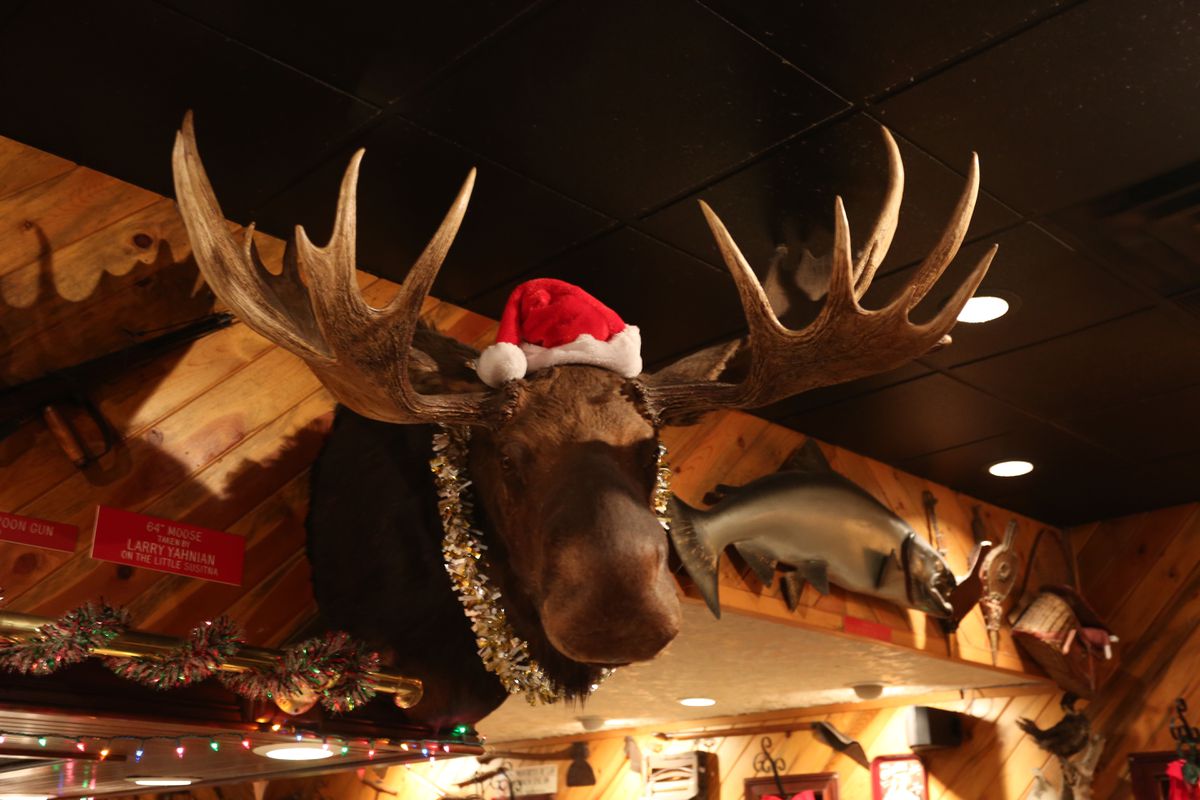 Sitting in a booth at Louie’s restaurant in Kenai, my eyes kept coming back to the bull moose head that hangs over the bar.

Because I go to Louie’s often, I don’t always think about the abundant fish and game mounts that deck the walls. What caught my eye was that the moose was wearing a Santa hat and had a Christmas wreath around its neck.

Taxidermy — and perhaps the commercialized holiday season — is one of those things that, if you think about it too much, begins to seem strange. Not in the sense that it is unusual — in Alaska, taxidermy abounds. My walls at home hold ducks, geese and grouse.

As I look at the faces of a variety of species at Louie’s, my eyes land on a little boy whose jaw is agape looking up in wonder at the bull moose. His mom gives him a lesson in game animals as she points out the different mounts — elk, mountain goat, wolverine.

The word “trophy” comports with my social newsfeed, in which hunters share what taking game means to them — a friend holding up a backstrap bigger than her, a table of meat processed and packaged by a mother and daughter, two girlfriends standing in the snow next to a cow moose realizing that they will be at work for hours under the stars.

Another friend is grateful to be there for her son’s first caribou, and I recall the stories she shared when she took him hunting as a toddler — he was fascinated with touching the velvet antlers. In the most recent photo, he is 9 years old, and I imagine the “trophy” for my friend is that her son learned patience, a healthy respect for wildlife and how to feed his family.

In a recent article for Ron Spomer Outdoors, Alaska hunting guide Tia Shoemaker shared her thoughts on her shift from being trophy-oriented as a guide to when she hunts for herself:

“When guiding season ends, my focus changes. My brain switches from Boone and Crocket to Spoon and Crockpot. I pursue fat, young blacktail deer, caribou that haven’t found a herd and are less likely to survive winter, and old nanny mountain goats.”

This year, Shoemaker gathered blueberries and hunted caribou with her mother. Although they weren’t after a “trophy” in terms of antler measurements, they took home the antlers from the two bulls they killed — not for their “trophy” properties, but as a reminder of the day and meal she shared with her mother.

The Boone and Crockett Club maintains records of native North American big game with an official measurement and scoring system for trophy animals. The record book started in 1932 and later became a competition for outstanding trophies, ranked by measurements. (Other record books also exist — Pope and Young, and Safari Club International.)

If the record book is meant to record a specimen or honor an exceptional animal, including the name of the hunter can change the meaning of “trophy.” It becomes a prize with public recognition, granted by experts.

In contrast, a reward is a private acknowledgment of an individual’s effort or good work. The best trophies are not things given or taken, but experiences that make us worthy of the game. The reward of hunting is individual — it’s what it means to you.

There was no sense of the word “trophy” when I held the white bird now mounted on a foam rock made to look like slate in my living room.

When I woke up that winter morning several years ago, I wanted to go to the mountains and follow Winchester as he brushed over the mountainside like an artist on the stage of life. Bird hunting was his work, and I watched it.

My work, if I did my job right, was to appreciate his gifts, honor his points and shoot his birds. Following Winchester was an invitation to go to a wild place where invisible birds appeared ghostlike on the wind.

In the cold months, the mountains and the birds are pure white. The snow and cold air distill the landscape so that nothing seems to be alive. Wind pushes snow and suddenly, where there was nothing but arctic waste, a flight of ptarmigan appear in the gusting waves of white. After shooting a bird, some hunters have noted a pinkish glow in its feathers. Perhaps it is the glow from the sun mistaken as a phenomenon.

These are wild places and wild birds, yet they are not a secret. It’s possible never to see the birds, never shoot them, and never view them in their light.

The places we hunt are haunted. They have been traveled for centuries or more. If we approach them only to take birds, we will have missed our mark. Author G. K. Chesterton said it best: “There is no way in which a man can earn a star or deserve a sunset.”

If it is in our hearts to be grateful for the worlds we encounter, we must know we are not capable of earning such worlds. We cannot imagine that any amount of daring on our part alone will reward us with quarry.

Whether it is my life that goes out in a pink hue on the mountains or the life of a bird, it is a pursuit of something beyond myself that drives me. Whether it’s my own spiritual and moral loneliness or something bigger than myself, I’m compelled to get there — to get to the place that isn’t on a map. Not because it hasn’t been charted but because it exists in the chemistry of the moment. Hunting is what makes me feel most alive and provides me with a way to value nature.

Many of us measure the season by the holidays marked on a calendar instead of the changes in the natural world. Our food is on a menu with little to remind us of the actual animal or the hardships of winter and hunting or gathering food.

Since there is no way to measure the intangible, the mounted bird on my wall is a physical reminder of the things that matter most to me.

And although some might think it strange to eat meals under the watchful eyes of a moose in a Santa hat, it makes sense to celebrate and be surrounded by the creatures that are predators and food in the place we live.