How fast is a speeding bullet? There’s a way to find out, and ways to increase the speed 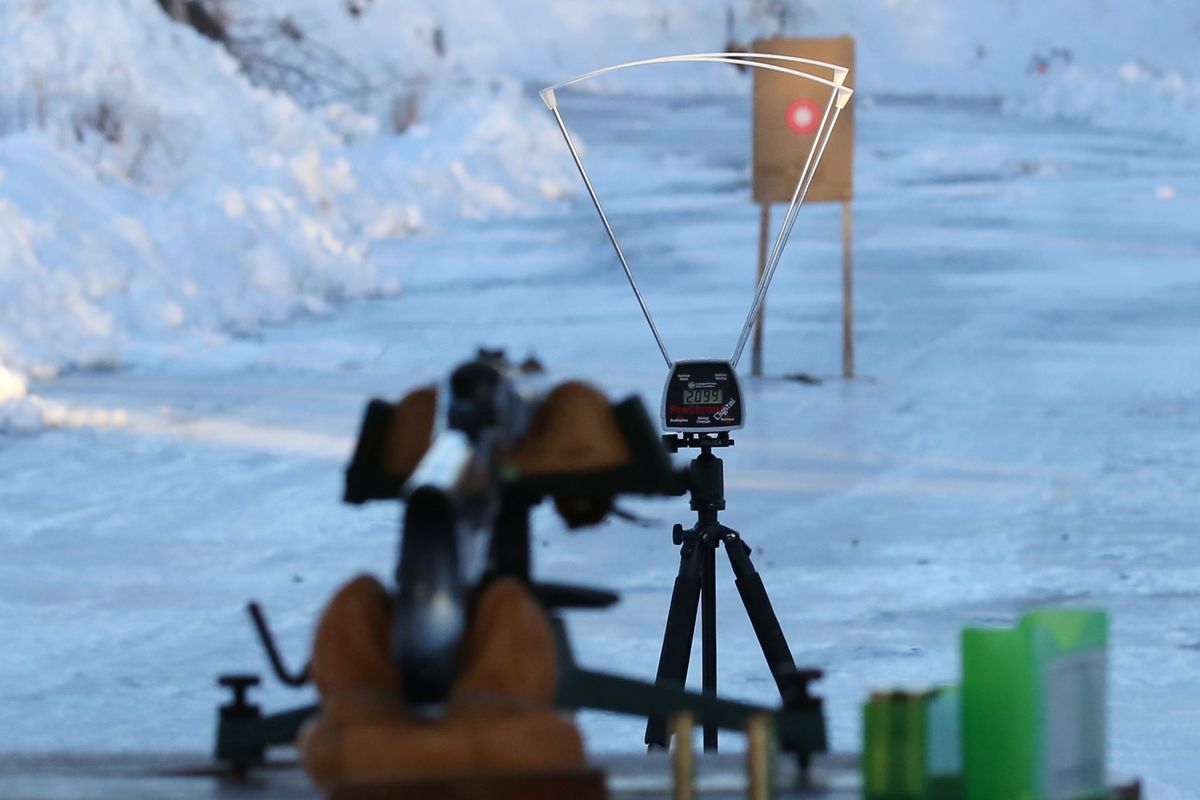 The coyote appeared on the edge of a snowdrift butted up to a low brush line of scrub willow that bordered the expanse of open tundra I was snowshoeing across. It was a bright, sunny afternoon in February, the kind of day when predators will lay at the base of south-facing drifts, out of the wind, and sleep in the sun.

The crust on the snow made for loud snowshoeing, and I imagine the coyote heard my approach from the 350 yards that separated us. He saw me and turned to trot, quartering away from me.

By the time I had settled into a sitting position — a bit difficult while encumbered with snowshoes — the coyote was still trotting and now a bit more than 400 yards distant. Settling the crosshairs just off the front of its chest and level with his back, I pressed the trigger.

I’ve been on rifle ranges while spotting for other shooters at long range, and when the light and temperature is just right you can see the bullet. Well, not the bullet itself, but the vapor trail that it leaves, like a miniature fighter jet, as it streaks to the target. Seeing it in the field had escaped me.

A combination of conditions and a heavy rifle with virtually no recoil allowed me to stay on the scope and see the vapor trail created from the 55-grain boat tail bullet leaving the muzzle of my .220 Swift at a little more than 3,900 feet per second (FPS), enter the coyote between the last two ribs and relieve him of the burden of existence. An intense example of high velocity at work.

Since childhood, I’ve felt the need for speed. Fast cars, motorcycles, boats, horses, bullets and, well, everything but texting.

It seems I came by it honestly, as my father also loved speed. It may have come from the wide-open country of the great plains, where tabletop stretches of flat land with endless visibility invite crossing it at great speed. Some of us remember the days when there was no speed limit in those places.

Whenever a new vehicle came along, the first thing to do was to see if it would “peg” the speedometer. There was a visceral satisfaction as the needle would hit the stop, usually at 120 miles per hour, and bounce back. Rev limiters have taken the fun out of long, lonely stretches of straight highway.

With bullets, there was a similarity. You had the claims of velocity for a given bullet out of a given cartridge from the manufacturer or tables listed in handloading manuals. But, rifles are unique — they all shoot loads differently, not to mention the variety of barrel lengths found for the same cartridge. It was sort of like the peg on the speedometer, you had a fair idea of how fast your vehicle could go, but you were never sure.

During my early days of handloading, chronographs (an electronic device that measures bullet velocity) were expensive, a bit cumbersome and few had them. Much like everything else in the world of electronics, they evolved and became less cumbersome, less expensive, more accurate and reliable. Nowadays, a handloader can have a chronograph that accurately measures bullet speed for around $100.

It was Winchester, the gun company, not the English setter, that finally drove me to purchase a chronograph. In the late 50s, Winchester introduced several new magnum cartridges, the .458, .338 and the .264 Winchester Magnums. The cartridges were based on the .375 H&H case, shortened to 2.5 inches, making the overall length the same as the .30-06, at 3.340 inches — a cartridge that held more powder but would fit in “standard” length actions.

It was expected that Winchester would introduce a .30 caliber magnum based on the same case. Instead, they surprised the hunting world in 1963, with the .300 Winchester Magnum, based on yet another case.

The new case was 2.62 inches long, had a short neck, and the result was more powder capacity. In order to maintain the standard overall length of 3.340 inches, the bullet was seated deep and thus, most of the additional powder capacity was lost. Original factory 180-grain loads listed a muzzle velocity of 3,070 FPS.

The .300 Winchester was embraced by the American hunting world and remains one of the most popular cartridges of all time. My first big game rifle came in the form of a Model 70 Winchester, chambered for the cartridge.

I was 12 years old at the time, and my firearms education was in its infancy. It took some years before I realized that the “standard” length action of the Model 70 was in fact the same length as the “long” action used for the .375 H&H. The difference was in a magazine spacer to limit the loaded cartridge length to 3.340 inches (the .375 H&H is 3.600 inches), a longer bolt stop, and the absence of a cut-out to facilitate loading longer cartridges.

I reasoned that if I removed the magazine spacer and cut back the bolt stop, I could seat the bullets further out and put more powder in the case and equal the velocity of the king of the .30 caliber magnums at the time, the .300 Weatherby. I did those things, and I was fairly certain I had accomplished what I wanted, but it took a chronograph to prove it, and that’s how I ended up buying one.

The satisfaction of being right was illuminated in the digital numbers on the chronograph screen when the 180-grain bullet tripped the light beams at 3,203 FPS.

“So what?” one might say. Does a couple of hundred FPS matter in practical application? Nope. A moose hit in the right place with a decent bullet won’t know the difference between a .30-06, and a .300 Winchester. The rare value of high velocity is in longer range shooting, where the flat line trajectory eliminates guesswork and scope adjustment for a quicker shot, like with the coyote.

But, working up loads and chronographing them adds another level of understanding of shooting and ballistics. In my case, I just can’t help myself.

I’ve been working up some loads for a .45/70, a cartridge I had never loaded for. The original black powder loads for the caliber issued a 405-grain bullet at a bit over 1,300 FPS and I told myself I would bump the handloads up a bit, maybe to 1,500 FPS, a substantial short-range big game load. Never announce your intentions they say. I’m up to 2,100 FPS with 400-grain bullets.

The coyote, a beautiful male with luxurious fur, will spend the afterlife, as soon as the sewing project is complete, keeping my head warm on the now-rare occasion when the temperature drops below zero.