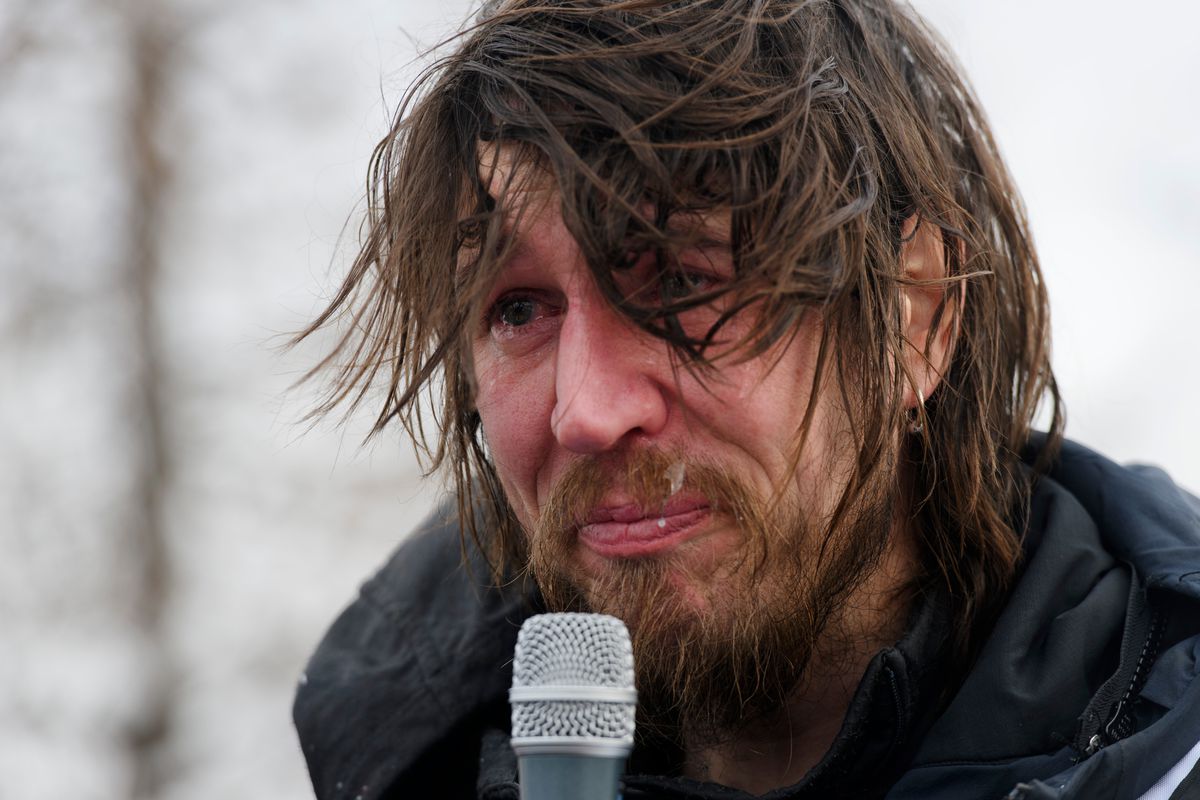 The crowd cheered. Some chanted “Brent,” and some yelled “Wild and Free,” the name of Sass’ sled dog kennel. Temperatures were in the teens.

Sass, 39, walked down his line of dogs, petting each one. “We did it,” he said. He gave the dogs frozen chunks of steak. Sass finished the Quest with every dog he started with. That’s what means the most to him, he said. The whole time coming into Fairbanks, he said, his chant was, “14 strong.”

“It was awesome. That’s how I could explain this race and this whole experience I just had with these dogs,” Sass said. "It’s amazing. I’m going to cry a lot here, so just, fair warning.”

This year’s Quest started in Whitehorse, Yukon, on Feb. 2. The race is notable for some warmer-than-usual weather and a hard-packed trail, according to a race judge. Also this year: Race organizers cut a 77-mile stretch of the 1,000-mile trail, between the Yukon checkpoints of Braeburn and Carmacks, because there wasn’t enough snow. Mushers drove between the checkpoints instead.

Sass had started 11 Quests before 2019. He didn’t compete last year. In 2017, he scratched from the race about 150 miles from the finish line after he pressed his GPS locating beacon due to concerns about two dogs. He placed second in 2016, first in 2015 and was forced to withdraw from the 2014 race following a head injury on the trail. The year before that, he placed third.

This year, Sass was the first musher to reach Dawson City — the race’s halfway point. For that feat, he won 2 ounces of gold.

Three of his 14 dogs have run the Quest before. For the rest, he said, the 2019 Quest was their first "and they rocked it.”

“I can’t wait until next year,” he said, "because then they’re really going to have the knowledge and the know-how and not be kind of looking back at me going, ‘What are we doing, Dad, right now?’”

Sass dedicated his win to all of those who have supported him, including his family, friends and fans.

A tearful Sass said he felt like the spirit of Joee Redington Jr. — a dog musher, breeder and mentor who died in 2017 — was with him on the trail. Sass had one of Redington’s dogs on his team, Jeep.

“He was a sprint dog and Joee always said when we were chatting and hanging out that, ‘This dog here, right here could run a distance race,’” he said.

Sass said he bought Jeep, trained him and on the Quest “he was phenomenal.”

After winning the Quest, Sass brought his team to his dog truck nearby. He ate cheesecake, smiled for selfies and greeted those in the surrounding crowd.

Teams continued to roll into Fairbanks.

Around 2:20 p.m. Monday, Whitehorse musher Hans Gatt and his eight dogs won second place and about $15,550. Gatt has won the Quest four times before.

Just over an hour later, three-time Quest champion Allen Moore of Two Rivers and his 13 dogs arrived in Fairbanks, winning third place and about $12,430.

Michelle Phillips, of Tagish, Yukon, and her sled dog team crossed the finish line in fourth place around 4:50 p.m. They won about $10,260.