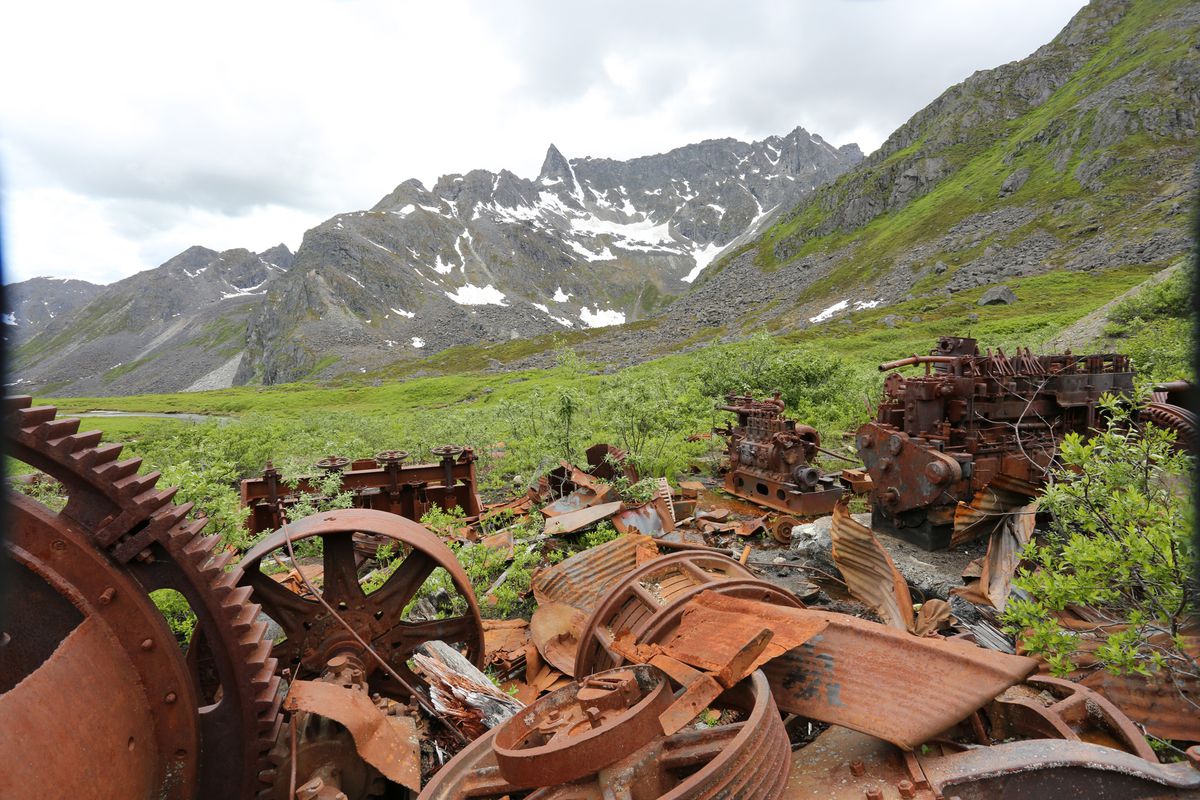 Remnants of a gold mine in the Talkeetna Mountains in July 2018. (Photo by Steve Meyer)

Remnants of a gold mine in the Talkeetna Mountains in July 2018. (Photo by Steve Meyer)

Last summer I hiked up an old mining trail on the southern edge of the Talkeetna Mountains north of Palmer. I had snowshoed the lower section of the trail in the spring, looking for willow ptarmigan gathering for the breeding season, and had found a fair number of the willow and whitetail varieties of the bird. Now I was seeing if the broods were doing well, and going deeper into the mountains to see if the country would invite running the setters during hunting season.

No matter, it was a pleasant hike with a mountain stream gurgling through the bloom of summer flowers across the valley. A high, near-vertical ridge to the east held a house-sized slab of rock in the stages of detachment. I expect the earthquake has shaken it down, perhaps changing the course of the stream.

Heading up the trail, relics from the mine began to appear. Rusted-out pipes and cast-off chunks of steel, their purpose left to the imagination, lined the stream bed like a trail of bread crumbs to the mine proper.

The rusted hulks of engines, crushers, corrugated metal and sluice boxes stood like ancient sentries to the entrance of a tunnel into the side of the mountain.

The entrance was bridged by snow and partially caved in. A narrow set of iron tracks, used to ferry material from the depths of the mountain in ore carts, emerged from the tunnel. They lay on the ground, twisted and upheaved, perhaps from the constant weather changes in the high country, or maybe earthquakes.

To the north, on a steep slope of granite, there was weathered chunks of lumber scattered about and a faint trail that zig-zagged to the top of the ridgeline — as good a way as any to climb higher and deeper into the mountains.

There was ptarmigan sign throughout the area, although I did not see any birds. The hatch wouldn’t have been more than a week old, and the hens stay tucked in in those early days. But the area did show promise.

It seems more often than not when Christine and I go into the mountains to hunt ptarmigan, we come across these old mining ruins. Old mining trails provide routes into the high country, and it seems there are always ptarmigan. We joke that maybe the birds have a penchant for gold, but really, the mountain streams that accompany mining sites also provide excellent habitat for the birds.

The country is usually suitable for sheep too, but we don’t see them, except on the periphery of these places. It makes me wonder if that is a result of the miners killing the sheep for camp meat. In those days, the early 1900s, meat was hard to come by and pretty much anything that could be eaten was.

I don’t dwell on that much, it was just the way of things. But I do get a bit distracted with thoughts of the hardships these early miners, fraught with gold fever, must have endured to accomplish what they did. In modern terms, it seems almost incomprehensible they managed such feats with the meager means they had. No doubt they explored on foot or maybe mules or horses before expanding and bringing in equipment. In those days, just getting equipment to Alaska, on ships crossing treacherous waters, must have been daunting.

On one occasion we found a large steel wheel, perhaps from an ore cart, lodged in the middle of a stream coming out of a gorge. Climbing up to the head of the stream there was no trail and no evidence of a trail or primitive road that suggested any mining activity. Perhaps weather and time had erased the evidence. We enjoy the idle speculation that such discoveries promote.

Flying over the vast expanses of tundra on the western Alaska coast, we’ve seen the rusted carcasses of decades-old snowmachines and wonder what happened to the person, stranded many miles from help.

On my way out of the Talkeetna Mountains, I, with the absent-mindedness of rote, picked up a few stray pieces of litter and stuffed them in my pockets. It would be months later, in a bay on Kodiak Island, that I would think about the litter.

Christine and I had gone to Kodiak to hunt deer, and our camp was at an old cannery, constructed in the early 1900s, that had canned its last fish in 1984. All along the water’s edge, on either side of the cannery, lay tons of scrap metal, waterlogged lumber, cast-off engines, vessels and piping from ships. As the tide went out, more scrap was exposed and a family of river otters made their way through the tangled mess, playing in the inspection windows of marine vessels.

As we watched the otters, I said to Christine, “How come we don’t ever think of the relics like these and leavings from the mines in the mountains, or old cabins with all sorts of deteriorated household items strewn about, as litter?”

“I never thought about it before,” she replied.

Why was it, we pondered, that a gravel pit scattered with shot-up TVs, computer screens, appliances and busted furniture was reminiscent of an imagined scene from the apocalypse, and what lay before us seemed like artifacts, set where they best tell their story?

Not long ago, while hiking through the area in the Kenai National Wildlife Refuge encompassed by the 1947 forest fire, I found a C-ration can, still intact except for a hole rusted through the side. Whatever had been inside had long since been eaten by forest creatures. C-rations were used to supplement the diet of firefighters during that time. I picked up the can, not as litter but rather as a historical artifact from another time. It sits in a prominent spot on one of our shelves at home.

I suppose it doesn’t much matter. Maybe pondering the subject is evidence of the author’s half-wittedness, I don’t know. Maybe in another 70 years, someone will find a rusted-out energy drink can and be just as delighted by it as I was by the old C-ration.

Steve Meyer is a longtime Alaskan and avid outdoorsman who lives in Kenai.