On a hunting trip to North Dakota, the kindness of strangers makes the road smoother 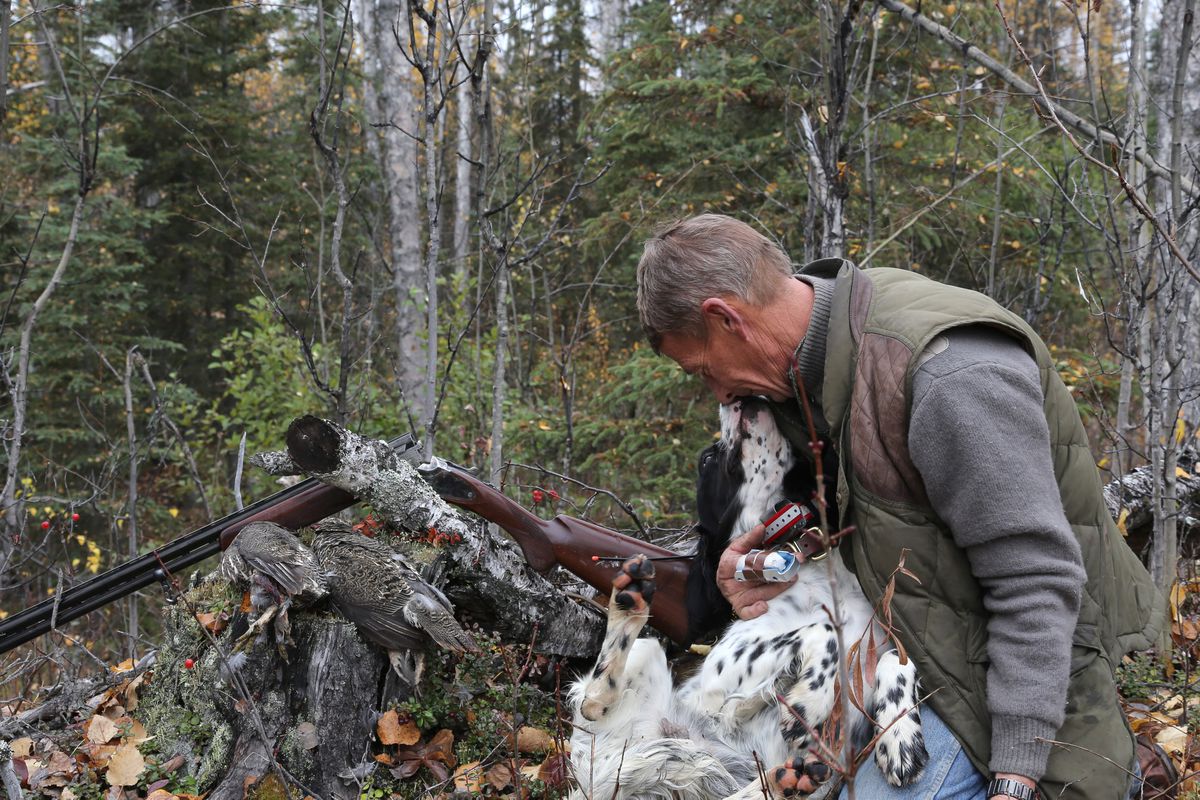 “You drove all the way from Alaska to hunt birds?” the young border patrol officer said as he walked up to the truck. The license plates on my truck, GNDOG, suggested it, and Winchester, who was standing on the center console, confirmed it. We had been driving for three days straight and had dropped down from Canada to cross into western North Dakota on our way to South Dakota.

We exchanged a few more pleasantries, and he waved us through. Before I drove off, I asked him if there was a medical clinic or a veterinarian nearby. He said he hadn’t lived there long enough to need either, but advised there was a small town just a couple of miles up the road where I might find one.

The idea for the trip had come a year earlier after becoming acquainted with a fellow from Kansas, who had an English setter and a place to hunt in South Dakota. A couple of years before, Christine and I took Winchester to North Dakota via commercial airline. He did fine on the trip, his papa not so much. A case of loving your dog too much, but I was never going to do that again.

We planned for Winchester and me to drive south in mid-October and Christine would fly to South Dakota, hunt for a couple of days, and I would go on to hunt with my dad in North Dakota.

About a week before Winchester and I left, Christine was out of town for whatever reason, and Winchester and I had gone ptarmigan hunting for the day. That evening, I sat in the setting sun cleaning the birds we had taken. There was a young cow moose who had adopted our yard, and the field of wildflowers in it, as her temporary residence. The dogs were used to her and didn’t pay much attention.

But when the moose walked over to within a few feet of where I was sitting. Cheyenne, our exuberant chocolate labrador retriever, lost her mind.

I guess she thought the moose was going to hurt me, I don’t know, but I figured I better go calm her down. When I went to the shop door, she charged around the back as she always does to greet me. I had turned the doorknob and just started in when Cheyenne hit the door from the other side at full speed. Which would have been fine, except my right index (trigger) finger was between the door and the jam.

When I pulled my hand back and looked at the mangled mess at the end of my finger, I thought, uh, this might be bad. I wrapped it up in a paper towel and finished cleaning the birds, and by that time the towel was blood-soaked and the pain was somewhat awful. It wasn’t until I cleaned it up and saw the real damage that I realized I needed to go to the ER.

Because it was evening and I was done for the day, I had already had a couple of cups of coffee laced with blackberry brandy. With Christine gone, I would have to wait a few hours before daring to drive. By the time I got to the ER it was throbbing good. The end of the finger was broke, and it took 16 stitches to close it up.

Now the dilemma was, should I cancel the trip or could I adjust to shooting with my middle finger? I had an aluminum guard over the damaged digit that seemed like it would protect it well enough in the field.

The setter pups were a bit over a year old by then, so for the next five days I took a different pup grouse hunting each day. At first, on a flush, I would reflexively try to shoot with the aluminum-shrouded trigger finger, which of course didn’t work out so well. By the time it registered and I got my middle finger to the trigger, the bird would be gone. But eventually over the five days I overcame that and was shooting as good as ever.

I was scheduled to leave on a Sunday, the day before the stitches were to be removed. In most any other circumstance I would just take them out myself, but because I had hurt my right hand I couldn’t negotiate the process myself. I figured I could get through Canada and only be a couple of days late removing the stitches.

By the time I got to the North Dakota border crossing, the finger had been throbbing worse than it ever had for about 24 hours. I had pain medication but didn’t want to take it while driving, so I was anxious to get the stitches removed, which I was sure would relieve the pain.

When I pulled into the little town the border patrol fellow had directed me to, I thought, this doesn’t look good. There were a few homes, a grain elevator, a gas station, a bar, a church and a little store.

The inside of the store, with the old photos, game mounts and decor that revealed its decades of service to the small community, could have been anywhere in rural America. I was the only customer when the pleasant gray-haired clerk asked if she could help me. I told her I was looking for a clinic or vet office that could remove stitches from my finger. She said the closest place for either was about 70 miles away and then asked if she could look at the finger.

She looked it over good and said, “I use to work at a veterinarian clinic. I can take those out for you.” She rooted around in a drawer and came up with tweezers, scissors and small knife and went to work.

As I thanked her on my way out, she saw Winchester sitting in the passenger side of the truck, waiting for me. She said, “Hang on a minute,” and disappeared in the back of the store. She returned with a slab of ham on a small paper plate.

“You give that to that handsome dog, he looks like he needs a treat,” she said.

The sudden cessation of great physical pain, which had happened when the stitches came out, is one of life’s greatest pleasures. So, I would add to the list, is coming across these fundamentally decent folks all across the country, who think nothing of lending a hand to others.