Hunting game animals is about food, and sometimes about respectfully sharing it 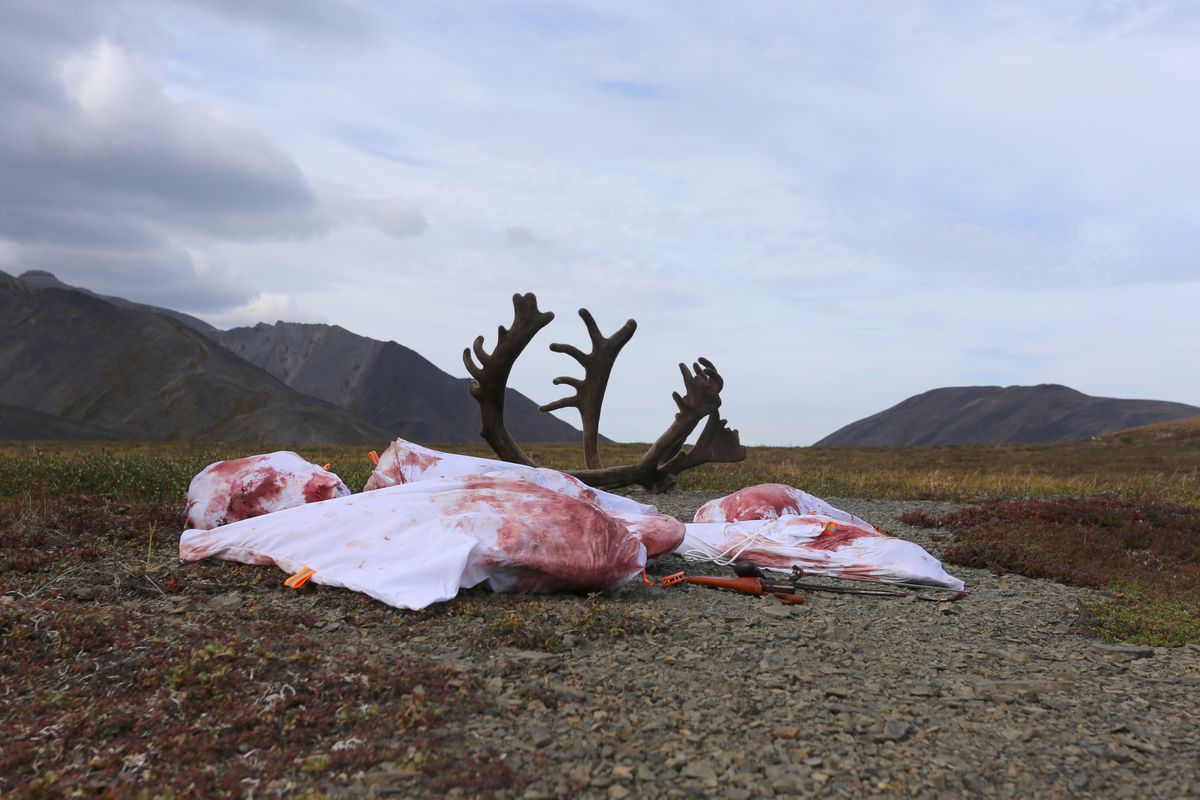 The freedom and privilege to feed oneself from wild places deserves the highest respect a hunter can pay it. Photographed in the Brooks Range, July, 2015. (Photo by Steve Meyer)

The freedom and privilege to feed oneself from wild places deserves the highest respect a hunter can pay it. Photographed in the Brooks Range, July, 2015. (Photo by Steve Meyer)

“I don’t know who made the laws but I know there ain’t no law you got to go hungry.” During a recent re-reading of Ernest Hemingway’s “To Have and to Have Not,” this line struck a chord in my hunter brain that I had missed before. It’s why you can hardly read a book once and think you are done.

As a young fellow, I was told if you can hunt, you can eat.

Growing up in rural North Dakota and then rural Alaska, my earliest memories are of hunting. Hunting was always connected to food. The game birds and animals we killed ended up on our table. The varmints we killed — fox, raccoons, gophers, skunks — were taken to minimize their impact on the critters we hunted for food, or the fruits, vegetables and crops we grew to feed ourselves.

In those early years, my family didn’t have money, nor did most everyone else, and it was because of hunting that we ate a bit better than others. Even so, we ate sparingly. I never said anything as a kid — you didn’t complain and were grateful for what you had — but I remember always being a bit hungry when a meal was finished. When I began to be successful as a young hunter and I could add to the family larder, I felt useful as I always assumed everyone else in the family was a bit hungry too. I tell Christine that’s why I turned out to be a runt.

The rural community was close, most everyone knew everyone, and they knew when folks were struggling. In that place, at that time, “going on the relief,” the term used for welfare, was unthinkable.

On occasion, a hunting friend would come by and say, “I got old man so-and-so’s deer tag, he’s still laid up and has all them damn kids to feed.” The proxy hunt wasn’t part of the landscape then, making the filling of another’s tag illegal. Everyone knew it was illegal, but those close-knit communities, composed of folks that didn’t always see eye to eye, just like everywhere, considered helping their fellows a responsibility.

It was close to Thanksgiving one year, and on our way out the door Dad told me to grab a bag of potatoes out of the cellar and a bag of sweet corn out of the freezer. I didn’t ask why, I just did it. The morning was cold, with a north wind driving snow into our faces as we crawled across fields sneaking up on geese. It was a good morning.

On the way home, we pulled into a farmyard and Dad said, “Grab those potatoes and corn and a couple of those Canadas and take them up to the house.” I stumbled up the steps with my heavy load and wasn’t prepared for what I saw when the door opened to my knock.

The older gentleman had the sunken eyes and stooped posture of hopelessness. I blanched for a second, then recovered and handed him the vegetables and the two big geese. He picked his head up and squinted down the driveway, and when he recognized the men in the truck, his eyes lit up as he blinked back tears and put his arm around me. “Thank you, son, and tell your people thank you for me.”

When we got home, and as I was unloading the take of the morning I commented that maybe I should have cleaned those geese before we gave them to the old fellow. Dad told me that was a nice thought and that I might not understand, but that old man needed those geese to be just as they were presented.

Dad said, “He’s had some bad luck, and he doesn’t feel very good about himself right now and he doesn’t want to be a charity case. Giving him those geese like they were lets him know that we know he isn’t lazy, we know he is capable and he’ll have some dignity while he prepares them himself. Helping folks is the right thing to do, but you have to temper it with a bit of thought so the person you are helping knows they are still useful.”

In retrospect, I now know that the sharing with others had a spiritual quality and was infinitely more valuable than the sum of the gift. What makes the sharing of game in a respectful manner is the sense of community — knowing our fellows who might need a hand and making a personal effort to help them.

A few years ago, Christine had taken a caribou and we were hanging up the meat at base camp, where we would fly out with it the next day. While talking with the transporter, who also does guided hunts, she volunteered that most of the folks who come to hunt from outside of Alaska, didn’t want the meat. Except for sheep, they all want the sheep meat, she told me. They would transport the unwanted meat to the nearest airport and it would be flown to Anchorage, courtesy of Alaska Airlines, where it would go to a meat bank, for lack of a better description, and distributed to the needy.

This meat-bank thing has taken hold across the country. Hunters dump meat they don’t want at these places, and it is processed, I guess, and a bureaucracy of some sort meters it out. I have visions of huge tubs slopped full of game meat, all mixed up, and it might be anyone’s guess what is what.

That’s probably an unfair description, but it’s what I think when I hear it. The first bothersome aspect of this “charity” is the premise that hunting is about food. As I was told as a youngster, “If you don’t want the meat, then it’s just killing stuff.” The second is respecting the game and treating it with some reverence.

I can’t come to terms with the idea of killing food animals that one does not want to eat. While understanding that it is legal, and at least as far as anyone knows it isn’t wasted, how can a hunter not know on a personal level someone who needs the meat?

Hunting, from when we first learned how to sharpen a stick, has a rich tradition of procuring food and sharing it amongst our fellows. Along with that there is communion with nature, the spiritual value, and the care of the land.

It seems for some those values have not been passed on, and some hunting has become commercial enterprise, where the reverence and respect for the food is ignored in favor of expedient killing, a hero photo then on to the next kill.

The value of hunting as a means of food procurement enjoys the support of a vast majority of the nonhunting public. But the black marks that continue to mount on hunter behavior leave me to fear that one day we might wake up and find that the law says we go hungry.