When the mountains call, we answer — even if it’s raining 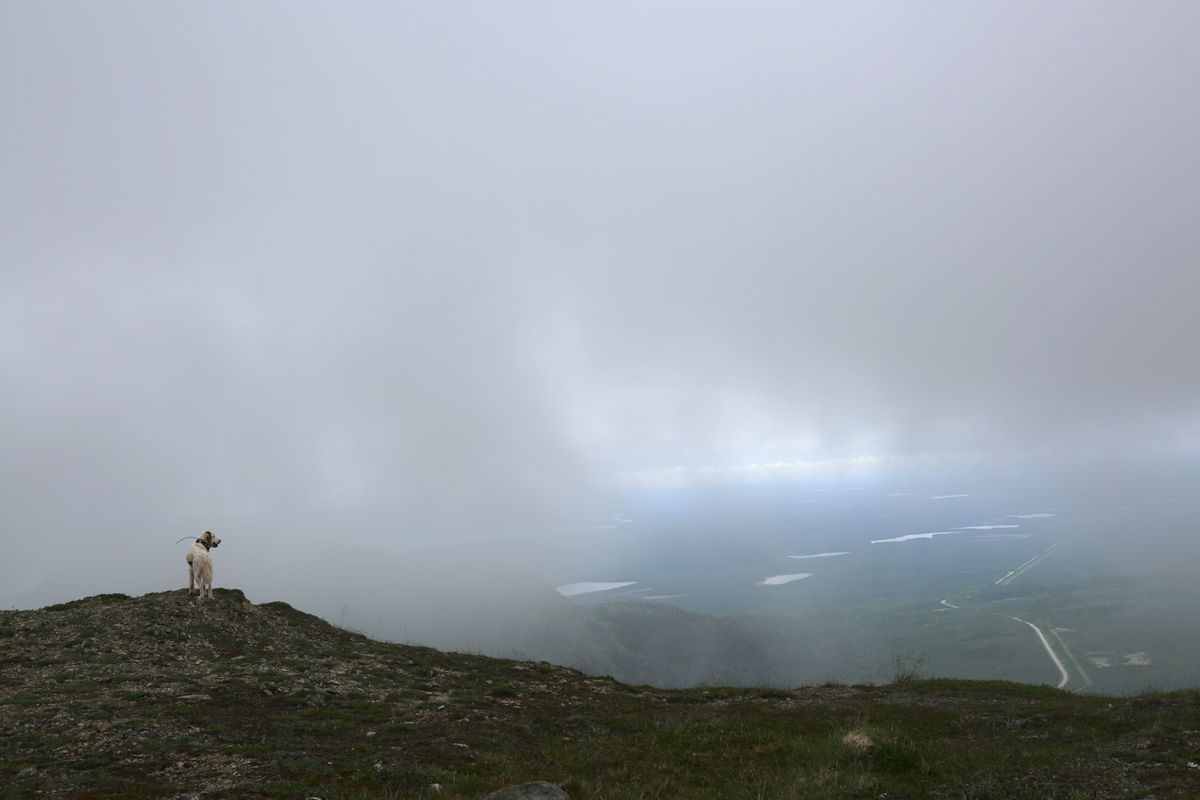 Cogswell takes in the view from a ridge in the Kenai Mountains. (Photo by Steve Meyer)

Cogswell takes in the view from a ridge in the Kenai Mountains. (Photo by Steve Meyer)

Midway into a mountain hike, I forced myself to stop thinking about lunch before breakfast. Instead, I switched my thinking to wonder why “the mountains are calling” is such a haunting idea.

It doesn’t matter if it’s raining, especially if it has been raining for weeks, and if it might be too windy at the saddle. You go again and again not because you are crazy but because you don’t want to go crazy.

I wondered if “the mountains are texting” would ever catch on as a phrase and decided it wouldn’t. The U.S. patent for the telephone didn’t occur until 1876, and John Muir’s famous quote was prior to that, around 1873.

The “Call of the Wild” could have been a telephone call — the book was published in 1903 — but probably not, as it was set in the Yukon during the 1890s Klondike Gold Rush.

These were calls to work or adventure. And this random sequencing of insta-facts is what Google has done to my brain.

I never seemed to have such vibrant idle thinking while hunting. Then, I am engaged and participating in the environment. There is no time to let the mind wander. Without a purpose other than the hike itself, the mental noise is as difficult to harness as it is in traffic.

When I forced myself to take better notice of my surroundings, a bird I hadn’t seen before landed nearby.

“Have you seen that bird before?” I asked.

Steve attempted to take a photo, and I watched as the bird eluded him again and again.

Nature so often seems fragile, but it is also tougher than we are. The bird survives the seasons and gives life to the woods with its song, its colors, its bobbing tail. This one had a red head and a black mask. I wished I were more of a birder and could identify it, or even better, know something about it. Does it live here? Is it native? What does “native” mean to a migrating bird?

Voices carried up the trail. The first group of hikers had caught up to us, and I was, as I often am not, grateful for the distraction. I hadn’t begun to engage in a conversation with the mountain, and now it was no longer ours. When the two women came into view, I looked back to the bird. It was gone.

We were about a half-mile into what is considered a strenuous hike with an elevation gain of about 1,800 feet in a mile, and I smiled at the sight of the two hikers. The first woman had a latte and a cellphone in her hand. Maybe outside of Alaska you would find more hikers wearing hiking boots and hydration backs. Here, you see a pair of friends mosey up the mountain in Xtratuf boots with a latte and a cellphone like they are on a morning commute to the fish dock.

“Want to meet for coffee?” I imagined the invitation. “Sure, we can chat on our way up the mountain.”

And by chat, they meant text, because the mountains weren’t calling. I couldn’t begrudge them their lack of reverence on the same day my inner monologue was at full volume. It’s not like I was one with nature.

“She had quite the hog leg,” Steve said after they passed.

That didn’t seem like a nice thing to say about someone’s leg.

“She had what?” I said. I hadn’t noticed her legs, but I guessed they were normal human legs.

I guess my gun, a .38 snub-nosed revolver stowed in my chest pocket, would be considered a little pig. Steve had no comment. I never could make sense of gun names. Why is a .38 special, which has a .357 diameter bullet — depending on the manufacturer — called a .38 special?

It isn’t as though gun manufacturers have any consistency in rounding the numbers up or down when it came to the diameter of the brass. A .44 is actually a .429-diameter bullet, and my .300 Weatherby is a .308. Yet, a .284 Winchester shoots a .284-diameter bullet. Why not call it a 29 extraordinaire or a 28 remarkable?

My reason for the name was as meandering of a thought process as my attempt to make sense of correct names for guns. At one time, I had wanted to get a micro pig. This is before a few friends had brought home micro pigs that turned out to be regular pigs. As it turned out, a segment of the micro pig market attracted impulse shoppers who were preyed upon by opportunistic regular-size-pig sellers who had only to present piglets as a species with no guarantee as to future size.

Lucky for me, I had seen more than one micro pig turn into a still-adorable 100-pound creature with a fondness for the recliner and home-cooked meals. I did not invest in a micro pig from an irreputable seller. But, if I had, I was going to name my little pig Mr. Wu, after a character associated with pigs in the “Deadwood” television series.

Instead, my little gun, which was not a hog leg, got the name.

The wind picked up as we approached the saddle, and the rain seemed to hang in the air waiting for a gust to hit our faces like a wave of coarse salt. The two hikers took what looked like their last drink of lukewarm coffee and headed back down, and we decided to do the same.

I took one last look across the gap between the mountains, and I was sorry I had blabbered in my head the whole way up instead of giving the mountain my full attention. It wasn’t one of those spring days filled with the scent of alpine flowers — the kind you dream about in winter. But I could smell the wet slate and see the road and river winding below.

I wasn’t sorry I went, and I didn’t think about lunch again until we got back to the parking lot.

Christine Cunningham of Kenai is a lifelong Alaskan and an avid hunter.