On the way to Bristol Bay, a sunken boat buoys a friendship 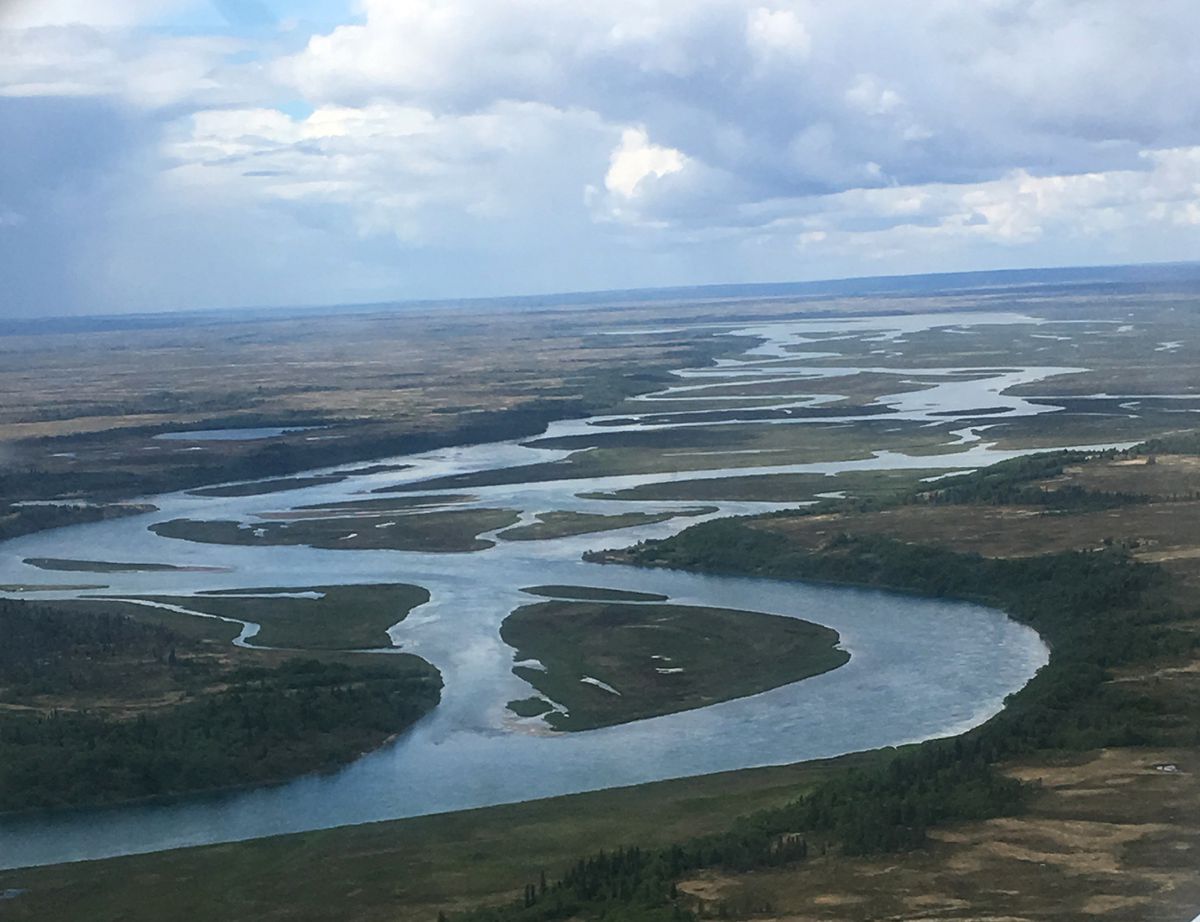 The shallow, braided Kvichak River proved too much for the Catch 22, a commercial fishing boat making its way from Homer to Bristol Bay via a land route. (Photo by Alli Harvey)

The shallow, braided Kvichak River proved too much for the Catch 22, a commercial fishing boat making its way from Homer to Bristol Bay via a land route. (Photo by Alli Harvey)

My two friends and I have been talking about the zombie apocalypse. It’s our shorthand for when things go very, very wrong.

The first time it came up was when I was hiking down from the towering and scree-lined Matanuska Peak in Palmer with Adri. She grumbled as she watched an acquaintance of ours trot farther and farther ahead, seemingly unaware or uncaring that we were hiking as a group.

“Well, I know who I want to spend the zombie apocalypse with,” she said, meaning me.

She described what it’s like commercial fishing in Bristol Bay as we hiked down. She talked about how you have to have each other’s backs.

Last week in a brief moment amidst chaos I remarked to her, “Well, here we are in the zombie apocalypse. I’m glad I’m here with you.”

We were standing in the cabin of the Catch 22, the commercial fishing vessel belonging to Adri and her husband Luke. We had been accompanying him as he headed out to Bristol Bay for the summer when the boat hit a rock in a very shallow section of the Kvichak River and sank.

The water pooled at our feet. Adri described the experience as something akin to watching your house burn.

About a month earlier, Luke’s eyes lit up when he asked me to go on this trip as a tag-along. He said it would make his “commute to the office” more exciting than just work. Adri said, “Well if you’re going, I’m going.” (And because she is extremely capable on boats and in emergency situations, thank god she did).

The boat had spent the winter in Homer for various repairs and Luke needed to drive it back to Bristol Bay. The route he selected is legendary even by Alaska standards — when I shared what I was doing, a fellow fisherman friend told me this trip is on his bucket list. As opposed to taking the coastal route, this itinerary shaved off about 700 miles and required an on-land haul over a mountain pass to move the boat from Cook Inlet to Lake Iliamna.

There was a section on the hand-drawn map Luke shared with me to illustrate where we were going that he described as the “Braids of Doom:” the infamously shallow Kvichak River connecting Iliamna with Bristol Bay. The map looked like something out of Lord of the Rings.

The scenery out on the water did, too. I remarked several times on our first full day that we were in Mordor. Otherworldly and smoky clouds threaded the steep, lush mountains on either side of the channel we were in.

We spotted a bear hauling across the beach, just a tiny speck moving quickly against the grandiose mountains rising behind. I was brought to tears by the beauty and sheer remoteness of the place and my gratitude for the experience.

Our luck continued as we crossed enormous Lake Iliamna. The water rippled blues and silver-white flashes as we motored through under clear skies. Adri commented on the creepy, house-sized boulders that lurked randomly underwater in the deep lake. She watched the depth carefully when she steered.

We made it across the lake to the start of the Kvichak, aka the Braids, at about 9 p.m. on our third night. The summer light was that warm, yellow mid-evening color as the sun got lower. The local guide from Igiugig, hired by Luke to steer us through the channels of the ever-changing Braids, pulled up to our boat in his skiff, tied up to the boat and came on board.

We entered the Braids and I immediately understood why we hired the guide. The river forked in unexpected ways, and when I was in the lower cabin I could see sand bars practically at eye level. With the strong current pushing us forward, if the boat nosed into one of those sandbars we could be stuck for a long time.

Adri mentioned at one point that she didn’t like the sharp sound she had heard. Maybe 20 minutes later, as Luke steered on the upper deck with the guide and Adri stood in the back, Adri noticed the bilge pump working more than it usually does. As I sat in the cabin staging dinner, she walked in, pulled the panel off the floor and looked in, and then walked quickly out. A moment later Luke flew in, yanked the panel up, jumped in, fished around and began screaming.

The wooden plug Luke used to fill what at that point was a fist-sized hole worked until it didn’t. As we attempted to move on I screamed, horrified, as gravel boiled up into the bottom of the boat, followed by gushing water. Adri shouted up to Luke, and he beached the boat into a sandbar, hard.

That’s where we stayed, about four feet of water filling the bottom of the boat and covering the engine. We turned off every instrument. It was unnervingly quiet. I watched Luke trying to calculate and plan. My heart wrenched.

We rode out with our guide on his skiff at midnight, and it began to rain. For me the most frightening moment of the whole ordeal was when, about halfway to Igiugig, the engine abruptly stopped. We gassed up as the current pushed us swiftly backward. I cried when the skiff started back up again and pushed us forward; I cried again and hugged Adri when we reached Igiugig and pulled ashore.

When we arrived at 2 a.m. in Igiugig, we were led up the short, steep bank to a warm, dry home as it began to pour.

Luke and Adri were adamant the guide did nothing wrong. The water is particularly high this year, river ice doesn’t scour the bottom of the river as it used to, and he steered us through the correct channels. My friends, on no sleep and as they dove into coordinating the rescue of their sunken boat, calmly explained that what had happened was an act of god; a run-in with a rock combined with the sand-blasting, hole-widening effect of riding through gravel.

The boat is now in Naknek. The epic journey out of the Braids was made possible by an outpouring of help from the community of Igiugig, logistical support from family, many pumps, a patch from a diver my friend described as an “artist,” a tow by family and friends also en route to Bristol Bay, and continued good weather that allowed them to arrive safely. The engine started. Repairs are underway.

Before I left, I told Luke (with full self-awareness of how cheesy it is) that I had thought I’d be telling a story about a boat trip. It turned out to be a story about friendship. But here’s the thing. In this very scary and profound situation that could have easily been much worse (say, had we been in the thousand-foot depths of Iliamna and hit one of those house-sized boulders instead of in the five-foot deep Kvichak), I felt overwhelmingly fortunate to be surrounded by people who acted so instinctively with competency and kindness, even as they underwent the trauma of watching their boat sink.

That kind of integrity can’t be faked. I can’t say enough how grateful I am to call these people my friends, and I am hoping for a fantastic fishing season for them to help offset this horrific start.

And more now than ever, I know who I’ll hang out with when those zombies arrive.

Correction: An early version of this story misidentified the boat being hauled over the Chigmit Mountains.