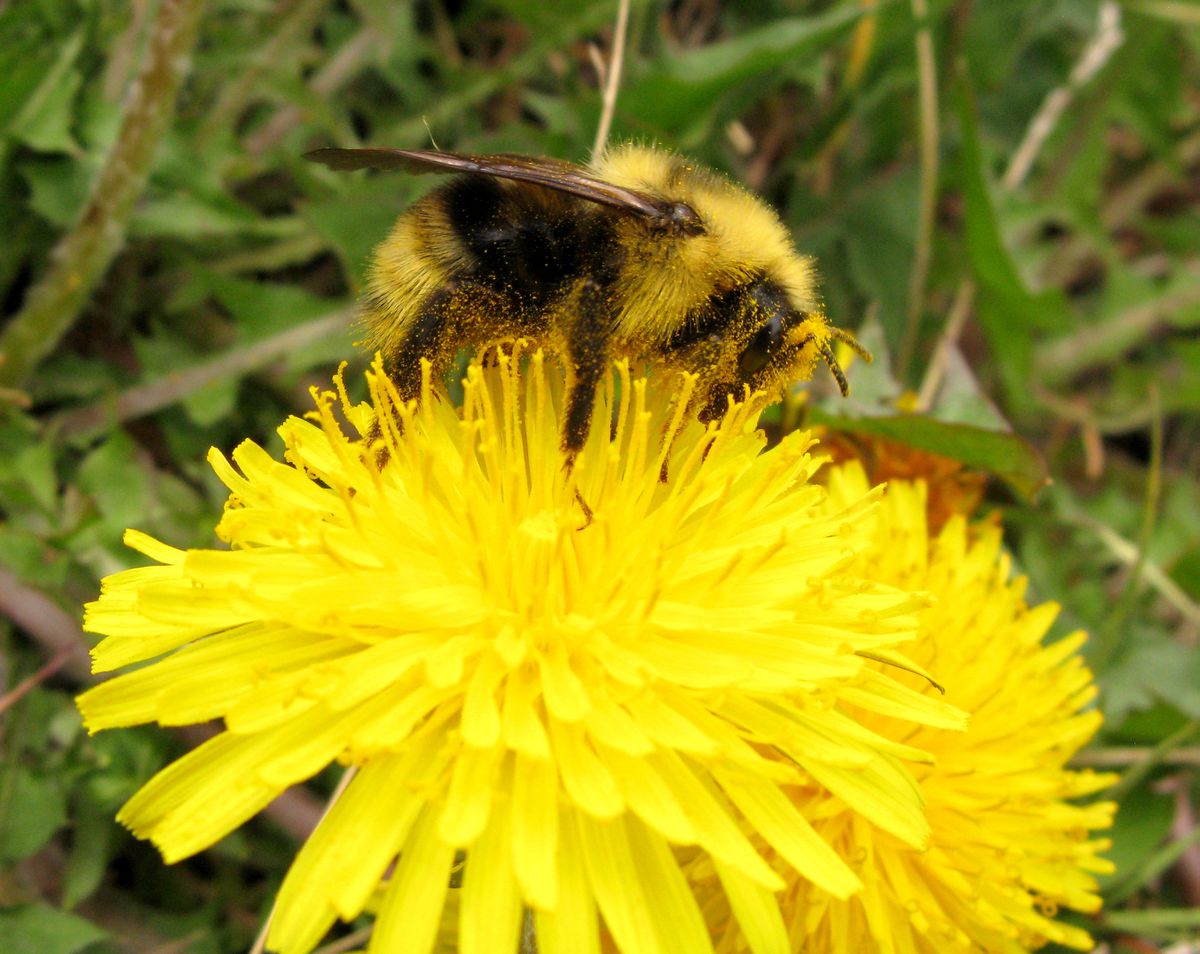 A bumblebee gathers nectar and pollen from a dandelion along Turnagain Arm. (Bob Hallinen / ADN archives)

A bumblebee gathers nectar and pollen from a dandelion along Turnagain Arm. (Bob Hallinen / ADN archives)

Few people in Alaska are fond of wild bees. When we think of bees, bumblebees and yellow jackets are usually the first species that come to mind. Other pollinators aren’t as common, and while not many people know their names, most inspire some trepidation when they are discovered buzzing around the doorstep.

Bees like people. Not because we are friendly, but because we are the sources of productive feeding grounds. Fireweed and dandelions abound in most semi-cultivated yards and fields. These two flowers draw bumblebees in droves. Bumblebees will spend the entire day on your lawn working the dandelion crop. They are excellent pollinators and innocuous. They rarely sting and can actually be petted while they feed on flower nectar.

Most bumblebees live alone or in small colonies in the ground. They may take over old mouse nests. There is little use digging into their nests for honey, because bumblebees produce little or none.

Andrenid bees, a species of bumblebee, live singly and are the primary pollinator of wild blueberries. The Denali Highway has a good population of these bees in most of the higher terrain, though few folks see them unless they are out in early June when the blueberries and lingonberries are in flower.

The most common and most feared bee in Alaska is undoubtedly the yellow jacket. They are mean-spirited and obnoxious. They are actually wasps, which means they can sting you many times with no damage to themselves. Bees will sting you once and die, but hornets and wasps will keep at you.

Despite their poor regard of humans, yellow jackets can do some good around the garden. They will kill caterpillars and other insects. However, their aggressiveness and fondness for human food may outweigh other aspects of their personality.

Should you be cleaning fish, they will join in — and protect the fish as if it was their own.

Your weekend cabin may become home to a wasp nest under the steps. They will come swarming out to sting as you walk up the stairs. It isn’t much fun when they get up your pants leg.

Alaska is also home to the bald-faced hornet. These scary-looking critters are twice as big as a yellow jacket and their sting is just as painful. Fortunately, they nest a bit higher up in trees.

We also have paper wasps. They are big, skinny wasps that can sting but rarely do. They are relatively rare and seldom are there more than a couple in the garden. Paper wasps are excellent pollinators and feed almost exclusively on caterpillars, thus making them a welcome addition to the garden.

Honeybees, while not native to Alaska, are here in abundance. Along the road system, many folks keep honeybees. Few hives overwinter in Alaska due to the cold, but some people keep bees in their basements.

These bees must have a food source to keep the hive going during the long winter. If you have the right environment, it could be worth it, considering that mail-ordering a packet of bees may set you back a couple hundred bucks.

The majority of bees seldom sting and the planet can’t live without them. There are places where the bees have been killed by pollution. China in particular has areas devoid of bees, where human workers must pollinate fruit trees by hand.

No matter how you view bees and wasps, they are important cogs in our ecosystem. The wasps that sting, particularly our yellow jackets, we could seemingly do without. However, the next time one of them stings me, I’ll try to be a little kinder and not smack it quite so hard.

John Schandelmeier is a lifelong Alaskan who lives with his family in Paxson. He is a Bristol Bay commercial fisherman and two-time winner of the Yukon Quest.