Join the Russian River crowd for the guarantee of salmon, or fish in peace with much lower odds? 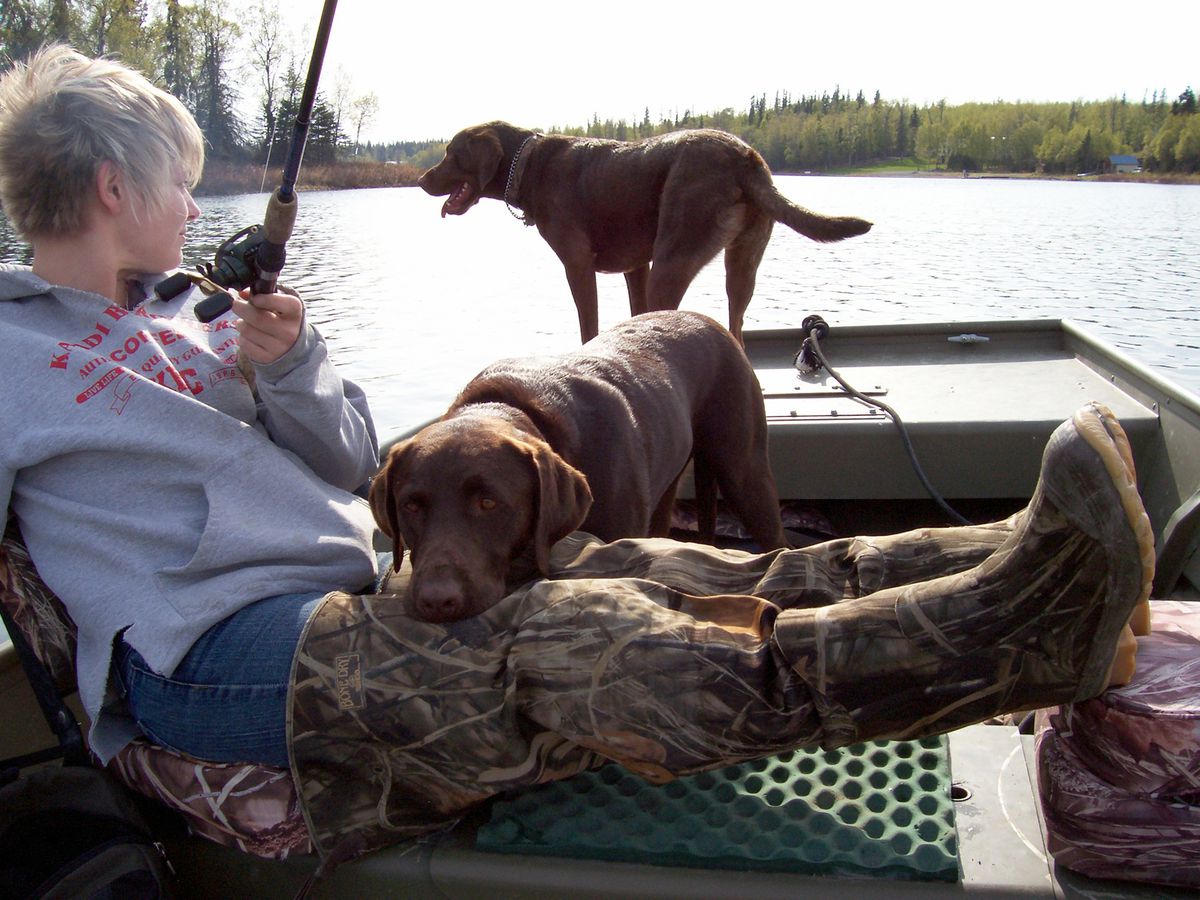 Christine Cunningham fishes with help from Jack and Gunner. (Photo by Steve Meyer)

Christine Cunningham fishes with help from Jack and Gunner. (Photo by Steve Meyer)

I spent a few years of my childhood along the Kenai River at Poacher’s Cove. Despite my proximity to fishing stories, cleaning stations, fish racks, buckets of eggs and smoked salmon, I didn’t absorb much knowledge about the king of fish. Not even through osmosis. Most of the time, I wandered away from the crowds and enjoyed my time alone outside.

It wasn’t until well into adulthood that I caught my first salmon. The fish, a kokanee, was about six inches long, and I held it up for a photo near Spirit Lake. The day was memorable because of the fish, but it also had the solitude and mystery I still crave in a day of fishing.

As a beginner, every aspect of fishing was new to me. I learned what to wear, how to cast and the story of the fish — kokanee are the land-locked version of sockeye salmon that never see the ocean and spend their entire life in a lake.

What I loved most was that my fishing partner and I had the lake to ourselves on a sunny June day, and I had a chance to learn something new.

Last week, several friends shared stories of fishing the Russian River for sockeye. I had resisted and instead spent the weekend in a canoe and small boat on a lake near my house. I did not catch any fish, but I enjoyed the quiet.

The last time I fished the Russian River, what I remember most was my surprise when the car jerked to a stop as we pulled into the campground behind 27 other cars, all with their engines off. It was 2 a.m., and I counted the number of feet stuck out of the windows of the cars ahead of us and watched a savvy family dodge the parking problem by riding in on bikes.

We eventually found a spot in the overflow parking, and I watched people rigging their fly rods with heavy mono line and tying flies at the back of trucks. It’s a different culture than true fly fishing, with its mastery of fly selection and reading of the river. The premeditated action suggested the fish were not particular and what mattered most was getting down to the water with an efficiency of time and space.

“Four flips for my three fish,” I heard a man say.

The fishing posts on my social feed in recent days use words to describe a landscape filled with people and salmon as if it were a festival of fish or a battlefield — Red Dawn, combat zone, line of fire.

Some regard the fishery as a necessity, like a stop at the wild grocery store. Others scoff at standing in a different kind of checkout line.

One friend willed his bamboo fly rod to his son with the caveat that he could never use it to floss reds.

The Russian River is a meat fishery, but it’s also an idyllic montane river. The salmon are returning home after a long journey, guided by the scent of the river where they were born. When Steve and I were able to find an uncrowded spot in previous years, I enjoyed the timeless spring creek and pondered the stories of salmon and salmon streams.

I have a friend who didn’t catch a fish her first time on the Russian River. She had wanted to try something brand new that she had only heard about. She later wondered about the unprecedented opportunity there and the geography of the place.

Another friend played hooky from work for a day in the sunshine catching a limit of fish on a rare day he could spend with his adult son.

The night before the bag limit increased from six to nine fish last week, Steve and I were in Cooper Landing scouting for black bear. I talked Steve into making a stop at the Russian River since we were in the area, didn’t have the dogs with us, and our rods were in the back of the truck. I knew it was not his kind of fishing, but I thought it would be nice to catch a few fish.

Near the Russian River campground, Steve stopped on the road behind a row of cars. The line to the parking lot had backed up onto the highway by about 20 vehicles. I remembered hearing of someone who claimed to have waited six hours for a spot when the limit increased in previous years. I kept this thought to myself.

While we waited in traffic, we talked about what it was we enjoyed most about fishing. Although I suspected Steve’s answer, I asked if he would prefer 99% odds of catching fish in a crowd or 1% odds in solitude.

“What you value in an experience depends on how you perceive it,” he said.

Steve, ever one to question a report, asked how the tradition of the “traditionalist” was defined. His fishing tradition started with his father in North Dakota. If they went somewhere outdoors and there were people around, they would go somewhere else. His best memories were not in large groups, but alone or shared with a friend.

I thought about the different traditions and values associated with the river we decided not to fish. My nephew had gone a few days earlier and reported his trip went well. He loves to fish, and the images he shared were not of crowds unless you count trees. He had taken a photo of the light through the leaves above him, a view of the Kenai Mountains, and his three fish on the grate near the river.

No matter what you value, individual choices have a personal meaning, while management decisions are based on the needs of the many. It would have been nice to fill the freezer, but I ended up back on the lake. Sometimes, you need a lake more than you need a fish.

Christine Cunningham is a lifelong Alaskan and an avid shooter who lives in Kenai.