When the antics of a bear disarm a hunter 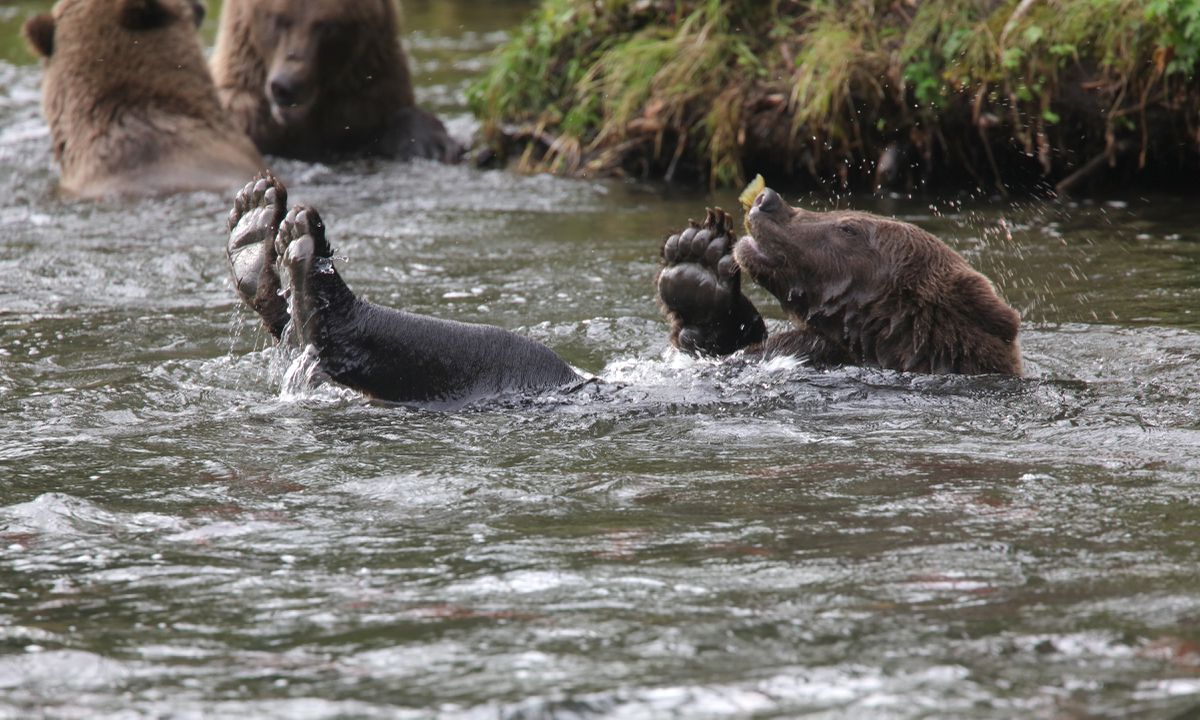 Over time Steve Meyer has come to find the antics of bears disarming. Photographed on the Kenai, August 2017. (Photo by Steve Meyer)

Over time Steve Meyer has come to find the antics of bears disarming. Photographed on the Kenai, August 2017. (Photo by Steve Meyer)

The bear just appeared. One moment the distant mountain slope was bare, the next, the glossy black form was ambling through blueberry patches. Evidence of his path stood out as the bear disrupted the frost-covered vegetation. A mile to the northeast, across the mountain valley from me, I watched his progress through binoculars.

After a bit, the bear’s intentions were clear. He was on the move, snatching mouthfuls of berries as he headed southwest on a course that appeared would bring him within a couple hundred yards below my perch on the slope above the south side of the valley. All I had to do was wait.

It was late September, a fine time to be in the high country for any reason. My purpose was to collect a berry-fed bear, some of the best eating available to Alaskans. It seemed all that was needed to make this bear into some excellent table fare was to keep track of him as he came closer.

In typical bear fashion, he would stop and sit on his fat butt and look around or roll in the alpine tundra while he snatched mouthfuls of berries, sometimes throwing his head up, the berry debris covering him like confetti. A comedy act on the mountain, and no charge for admission.

The time it took him to come down the slope and cross the valley to climb up my side and cross in front of me, perhaps 150 yards away, unnerved me; it seemed we had spent the afternoon sharing the mountain. As he passed, I didn’t raise my rifle. Instead I thought, if I shoot you, your days, days like what I had just watched, are gone.

Something changed in me that day, and I’ve been trying to reconcile it since.

One could attribute the change to my arriving at the supposed last stage of a hunter’s life, where the killing isn’t as important as it once was, and the experience of just being out there is the most rewarding. Except I started hunting long before I carried a gun, and I loved every minute just being there. My love of the outdoors and of hunting, of the natural world it seems, came with my bloodline.

I’ve never cared for pigeonholing someone into the tidy package of labels like the four stages of hunting (shooting, limiting out, trophy and sportsman). And while there are some similarities in hunters I’ve known, it is not definitive, and in female hunters, at least in my experience, it’s not even close.

In part the change that came over me may be attributed to Christine blowing into my hunting life like a November storm, hard out of the north. By my side in the field, her questions, thoughts and intelligence brought a new perspective to my hunting life.

In the years that followed I was often content to carry a camera while Christine carried a shotgun. It would be years before Christine developed an interest in big-game hunting. I talked about it a lot and reminisced of my younger days, when big-game hunting took precedence.

On her first big-game hunt, for caribou in the Brooks Range, I didn’t take a rifle. She took a nice bull caribou, and with our bird hunting and the fish we catch, we didn’t need more meat.

After that hunt, while telling friends about her success, they would ask why I hadn’t killed a caribou too. Explaining that it was enough for me just to be there, some looked at me as if I was a new species. Some would suggest that I was turning “green,” sort of in jest, but maybe with a bit of edge. Which is sort of funny. How can you love hunting and the animals you hunt and not care about the environment critical to our mutual success?

So, what drove me down this road? For the past week Christine has been gone caribou hunting with a couple of other women. That’s right, she dumped me to go on a walk-in hunt with her friends. And for the first time in years, I have the lust to go big-game hunting again. It’s grown to a constant throb in her absence.

It started while helping her get ready for the hunt. Attending to the details, offering advice, going to the range — it all sparked an excitement I haven’t had for some time. I wasn’t jealous as much as I was delighted for her to have the experience with her friends. I would not have considered intruding, but I wanted to be out there too.

I’m not a religious person, but I believe we are connected to the land and all of its inhabitants. I feel the spirit of those connections guide me. Nowhere do I find more clarity of thought than in the high country, rifle or shotgun in hand. The spirit of the country blows through me with the mountain winds that change from moment to moment, that demand introspection and evaluation; life itself.

With that, one must evince rigor in honesty, and most of us would agree that in our younger years our drive to bring home game when it wasn’t our only means of survival was driven by a need to succeed, for our egos. It’s human nature in most of our endeavors and nothing to be ashamed of. As we gather experience and age, we care less about what others think. That freedom in hunting brings us to a special place.

An old African hunter, whose name escapes me, said, “Hunting is a conversation with our own death.” Hunters understand perhaps more than most that death is a part of life, and for many in our advancing years the conversation becomes louder and more meaningful.

Jose Ortega y Gasset, a renowned Spanish philosopher who, as near as I can tell, never hunted a day in his life, wrote, “One does not hunt in order to kill; on the contrary, one kills in order to have hunted.” I’ve never been able to reconcile that statement.

Hunting is a holistic endeavor, a melding of the spirit with the natural world where the kill is something of value, done with reverence and respect, and where, when that spirit flows through the hunter, tells him that choosing not to kill carries the same weight.

My sharing this comes from knowing that other hunters have had similar experiences. It seems with time, the connection we have with what and where we hunt grows and prompts deeper thought for our actions in the field. I believe we are born hunters, not killers, and we’ll always be hunters, even when we don’t kill.