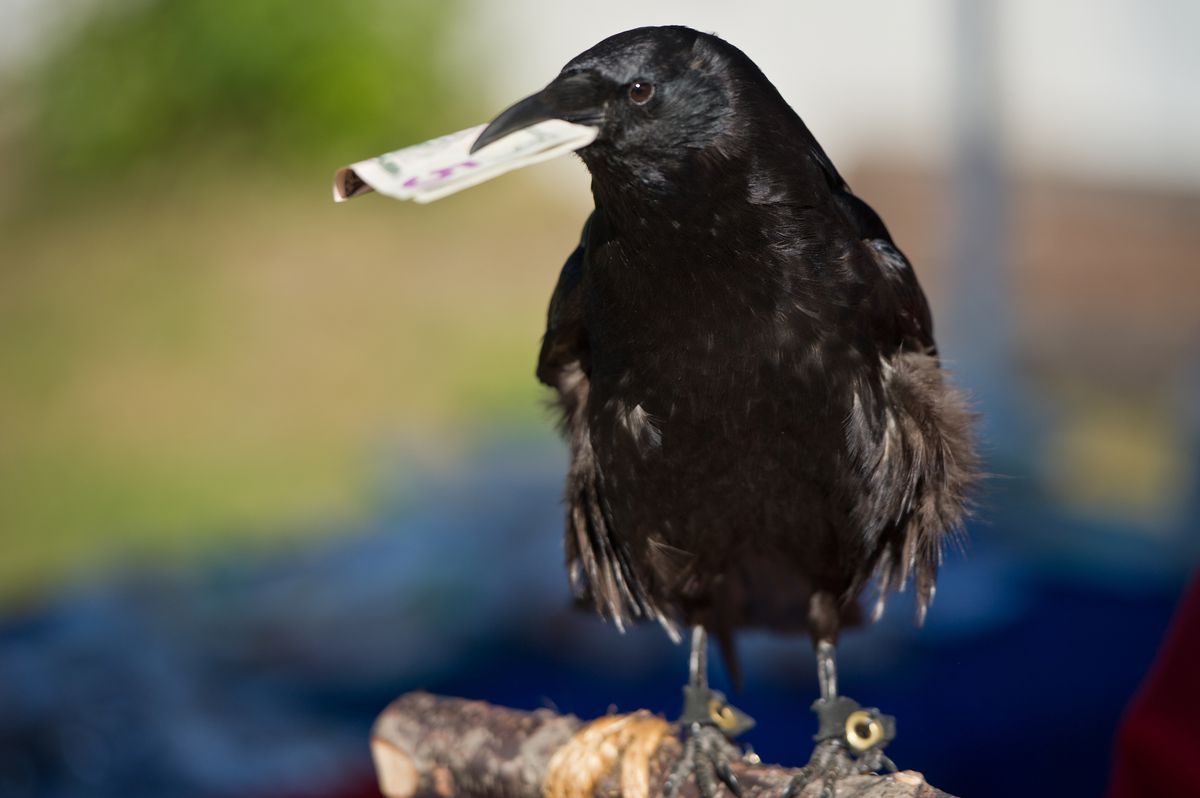 Cody, a Northwestern crow, accepts a donation for Bird TLC at the organizations Gone With The Wing bird festival on August 22, 2015. (Marc Lester / ADN archive 2015)

Cody, a Northwestern crow, accepts a donation for Bird TLC at the organizations Gone With The Wing bird festival on August 22, 2015. (Marc Lester / ADN archive 2015)

I am back in the Interior, but still have the coast in my head. Actually, the birds of the coast are what still hold my attention.

The mudflats of Bristol Bay have a huge variety of seabirds. Prince William Sound also has a number of different species. Bristol Bay, with its shallow water and numerous fish-processing plants, allows gulls to overwhelm all other species. Valdez, with its more varied habitat, tends to highlight other species and is home to one of our smartest avians — the Northwestern crow.

There are several types of crows in North America. Many ornithologists believe them to be members of a single species with individual variations.

Folks from the Lower 48 are familiar with the American crow. The Alaska version is slightly smaller and seldom leaves the coast. They feed on most anything. The majority of Valdez birds hang out near the boat harbor looking for scraps. They are smaller and less impressive than the more common raven, thus most people pay them little mind.

Watch these noisy birds closely. They are extremely social — and entertaining. They can be seen thieving food from the backs of pick-up trucks and bait from sport boats. I watched one at the Valdez Harbor peck at a small dog to distract it while a half-dozen of his buddies cleaned up the dog’s food.

Pretty smart, but not as intelligent as the crows of New Caledonia.

New Caledonia is an isolated island 900 miles northeast of Australia in the Pacific Ocean. The crows of this island are a subspecies of the birds we see in Alaska. What makes them different is their ability to create tools. Not just use tools — ravens use tools, and chimps use tools. But New Caledonia crows fashion new tools to meet the challenges of the day.

It has been widely reported that they fashion hooks from branches by first stripping the leaves and then biting off the twig below an offshoot. They then use the formed hook to fish bugs out of crevasses. One, robbed of her hook by a partner, made a new hook from a piece of wire by sticking the end in a tube and twisting her head to bend it into the desired shape. Going further, this bird, named Betty by researchers, was able to modify the hook she formed to make it suitable for other tasks.

Chimpanzees can’t do that. There are humans who can’t do that! These birds can make different types of tools from a certain type of leaf so they can extract insects from cracks. The manufacture and use of tools was once thought to be the defining behavior of humans, but now it appears we are not as smart as we think.

Our ancestors took a couple million years to come up with arrowheads from a chipped flint tool. The birds are learning too. Betty, in particular, has shown the ability to correct the angles on her hooks to make them just right.

Purposeful modification of tools without prior training or experience is virtually unknown in the animal kingdom. It appears the crows are learning through example and passing the skills along to subsequent generations, who are defining them further — sort of like a trade school.

The term “bird brain” doesn’t seem like such an insult anymore. The next time you head to Seward or Valdez to fish, stop and spend a bit of time watching the crows. I guarantee you will be fascinated.

John Schandelmeier is a lifelong Alaskan who lives in Paxson with his family. He is a Bristol Bay commercial fisherman and a two-time winner of the Yukon Quest.