Why a caribou hunt might be just what the doctor ordered 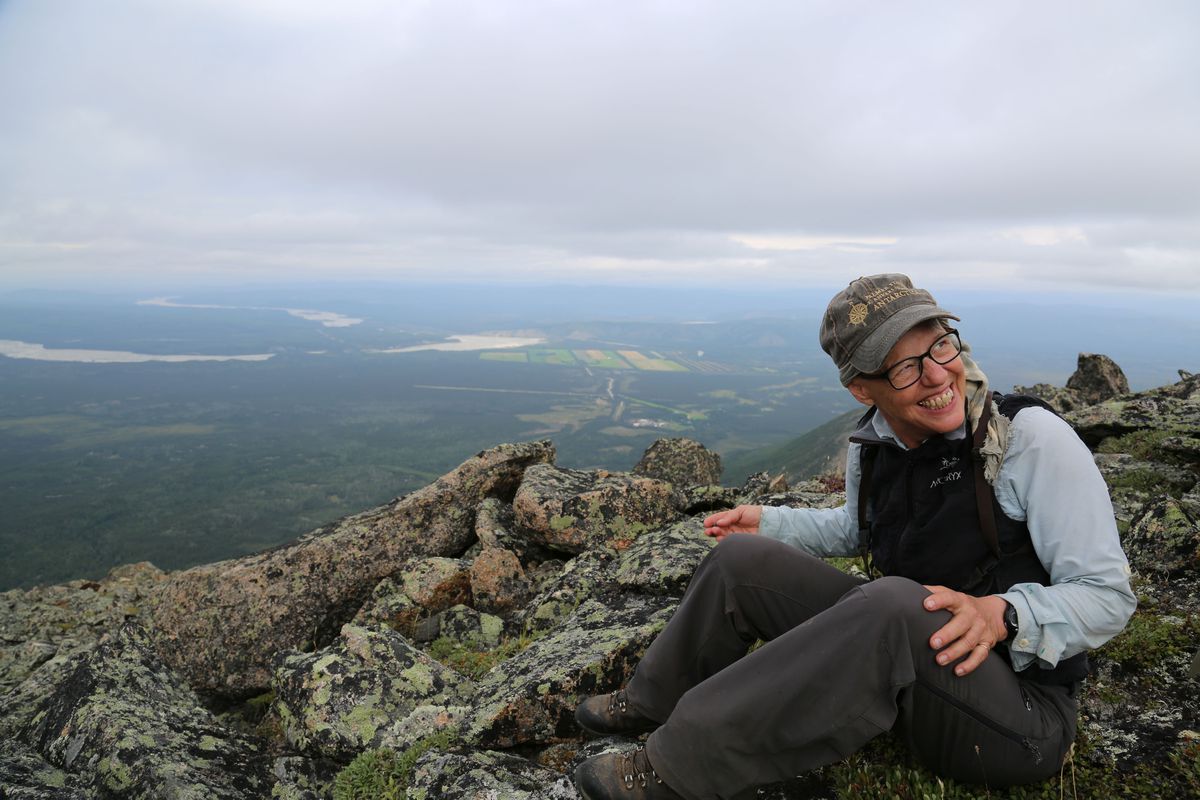 Dr. Julia Heinz takes a break from hunting to enjoy some blueberries. (Photo by Christine Cunningham)

Dr. Julia Heinz takes a break from hunting to enjoy some blueberries. (Photo by Christine Cunningham)

The narrow trail climbed gently into the alpine until it reached a rocky rim just before the plateau and the paths of hikers, hunters, caribou and sheep diverged into myriad irregular routes. Julia, one of the two women I followed that morning, pulled out her binoculars. I was grateful for the break from our hike, which Julia had described as “the easiest access to the alpine I have seen.”

She had invited two of us to join her for a walk-in caribou hunt in the Interior. Although she was in recovery from a cancer diagnosis and scheduled for her last chemotherapy treatment just days after our trip, she was radiant from the climb and in good spirits.

Despite her description, the hike was by no means easy, with heavy packs and a gradual ascent to the plateau. For hours I had marveled at Julia’s fortitude. While many who are sick do not have the strength to attempt a climb to the alpine, she found it a necessary part of her recovery.

We had shared a frequent email correspondence for almost a decade after I first “met” her online as part of an Alaska women’s hunting forum. As a family medicine doctor in a small town, Julia had shared thoughts on the restorative aspects of nature. Her work as a physician took her to the Marshall Islands and Antarctica. In her travels abroad, she noted where people lived close to the land out of necessity, and how death is a regular part of life.

“How are your blisters?” Julia asked me.

I was a bit embarrassed. Here we were on a mountain with each other for the first time, listening to the whisper of the creek in the valley below and watching the fog roll and linger across green hills. There was a gentle breeze, and the earth felt solid beneath our feet. We had stepped beyond the realm of human-made noise and views and were now in the country.

“They’re fine,” I said, and I wished I had never confessed to them. Probably, I thought, Julia would rather none of us think about her diagnosis either. But we shared an equal concern for each other at each stop.

Gabriela, a natural and social science researcher, shouldered the heaviest pack along with a hefty assortment of life questions that seemed, for our time on the plateau, folded squarely away and ably carried.

My only unspoken complaint was that I missed seeing the dogs run ahead of me in the field. I felt my load was the lightest (although Julia would argue hers was lighter), yet I was last in line. I carried the camera and used the excuse too often to catch my breath as my companions charged ahead.

Julia marked the place “Rocky Ridge” on her GPS before we started across the plateau. We spread out, hunting for caribou as well as a good spot to camp near water in the boggy alpine tundra.

The second morning, we woke to dense fog and rain, and I joined Julia in her tent. She boiled water for my coffee and her tea, and I asked about her thoughts on recovery. It seemed she had always sought nature to renew her spirit because it gave her more to give back to her patients and loved ones.

“The natural laws of the world are difficult,” she had once told me. She accepted that the life cycle required death to sustain life, and the acute awareness and resolve required of hunting closed the gap between life and death with understanding.

But was it any different now that she was the patient?

Her perception changed only slightly. In medicine, she diagnosed and treated people, studying their history and physicality to derive an opinion. In the wild, the requirement to solve problems was direct and raw — requiring moving with the current. Now, as a patient, she described the cleansing cycles of nature. The greatness of the mountain, in particular, restored the proportion of her difficulties and existence to a manageable smallness.

It had stopped raining, but the fog had not yet lifted when we set out again to hunt the plateau. The ground and air were full of life — a hawk hunting a ground squirrel, a pair of rock ptarmigan appearing and disappearing with movement and stillness, and ... “Look there!” Julia shouted just as a Dall ram bounded across Gabriela’s path and vanished with a final leap into the fog.

Julia had also spotted what appeared to be bull among a small group of caribou. As we walked and then crawled toward a better view, what at a distance looked like ridge lines ironed out into rolling tundra. A cow and calf wandered toward us from behind, stopping to feed as they passed through to join the rest of the herd ahead of us.

Only after we determined we would not have a clear shot did we realize how much time had passed. It was getting late, and we decided to head down to base camp to dry our gear and start back up again in the morning.

Just as we approached the rocky ridge Julia had marked, Gabriela spotted a bull, and we lowered ourselves to the ground. My only view of the animal was of antlers, heavy and thick with velvet, headed on a course toward Gabriela.

Many things happened between the moment I heard the report of Gabriela’s rifle and when we made our way down the mountain with packs full of meat and wearing headlamps, reaching base camp at 4 the next morning. Gabriela had knelt next to the bull with her hands in her lap. Julia had suggested we take a moment of silence and, after we preserved the meat, cover the carcass with the animal’s hide.

Life, whether it belongs to an animal or a person, is not easy, and neither is death. We had carried so much up the mountain and returned with so much more in value on the way down. It seemed as though we had traded our worldly concerns for something greater than ourselves, and we knew it.

A few days later, Julia sent a message from an inner-city tertiary chemo ward and then from where she set out her sleeping bag in a Lower 48 airport terminal on her way back home. I imagined bits of lichen and fur somehow attached to her things, a clue here and there of where she had been in her belongings, but especially the plateau and caribou reflected in her eyes.