Whether it’s fire, floods or even locusts, try to adapt to what nature throws at you 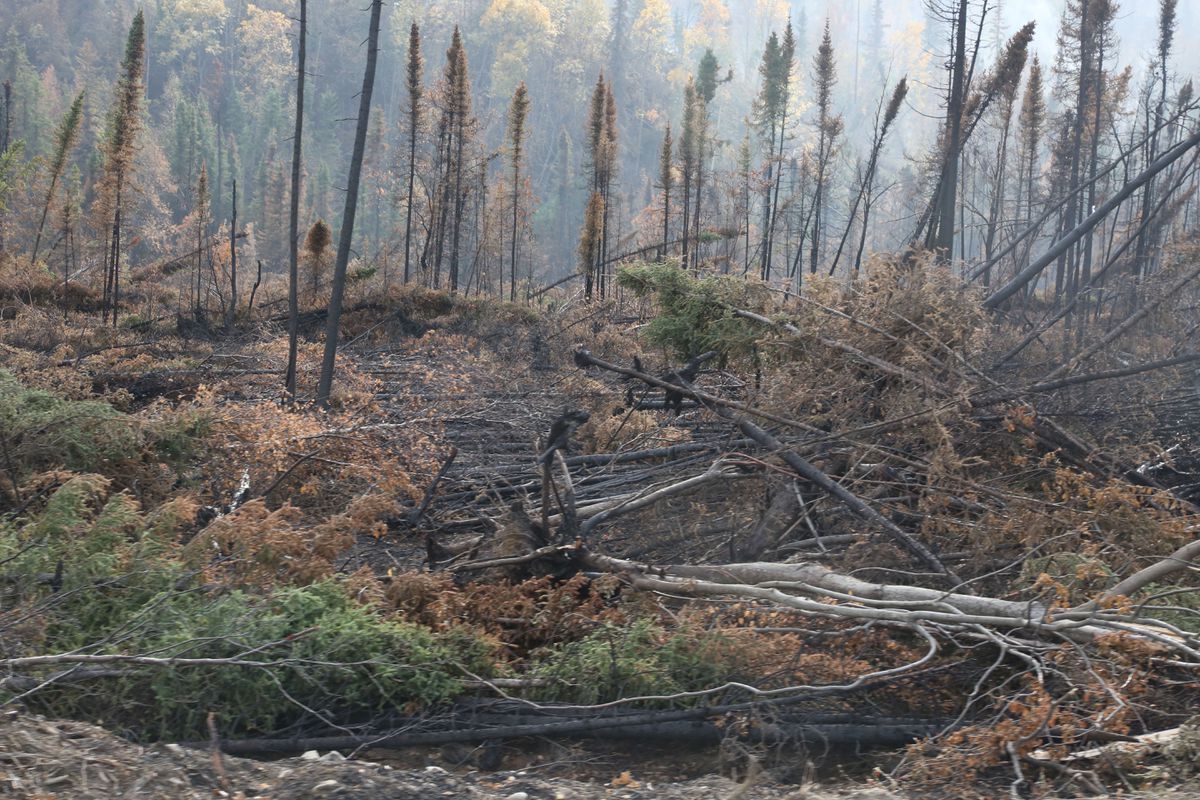 It may take a few years, but hunters should reap benefits from the destruction. Photographed Sept. 2019, eastern Kenai National Wildlife Refuge. (Photo by Steve Meyer)

It may take a few years, but hunters should reap benefits from the destruction. Photographed Sept. 2019, eastern Kenai National Wildlife Refuge. (Photo by Steve Meyer)

“I’m headed for the apocalypse,” I told Christine as I was leaving Kenai a couple of weeks ago on my way to Seward and then to Anchorage for business, with the uncertain prospect of getting back home later in the week.

With the fire a serious threat and the prospects of the Kenai River flooding from the semi-annual burst of the Snow River glacier dam, our world seemed to have taken a sinister turn.

The fire had done what we had thought it could not and penetrated beyond the alder line and into the high country. We worried about our beloved Whitetail ptarmigan, whose range is limited to the alpine. Of course they would fly away from the fire, but where would they go, we wondered.

Over the summer we had seen a black bear sow with two cubs off the east end of Skilak Lake Road on several occasions. It appeared she and her cubs would be forced to cross the Kenai River to escape the fire, and we worried the cubs wouldn’t be able to make the swim.

I wondered where the bull moose that lived in the same area as the bears, the one I had been watching with hope to photograph in the fall, would go. He could swim the river, but would he make the right choice and not be pinned down with no escape?

I suppose the double-edged sword of spending so much time around wildlife is that it gets personal, and you have to remind yourself that nature can be cruel. Still, you worry.

During June and July, we had made numerous trips past the Swan Lake Fire and we gagged down plenty of smoke, but beyond that it seemed under control and a minimal threat to people. We had assumed, like everyone else, that with the August rains (which never showed) the fire would die a natural death.

The parts of the fire visible from the road didn’t seem to show the same weight as the other two major fires that touched this area in 1947 and 1969. The burn didn’t appear to be as complete, and we wondered if the rebound would produce the same habitat growth the previous two had.

During my early days in Alaska, the northern section of the Kenai National Moose Range, now the Kenai National Wildlife Refuge, was my home away from home. I hunted, camped, hiked and fished there at every opportunity. I had a lot of favorite places and when Christine partnered up with me, I wanted to show her these places.

I took her to a favored moose hunting spot, where my partners and I would set up a camp that we would shuffle in and out of it all season, depending on our work schedule. There was a hill above the camp that commanded a view of a moose pasture, bordered at the far end by a small lake. Christine and I climbed up the hill, and I pointed to the west and said, “See that lake?”

That was early in our partnership, and she hadn’t yet mastered looking at me as if I had three heads. She simply said, “What lake?” Because the pasture had grown up and the view consisted of a sea of near-impenetrable black spruce, the lake no longer visible from the hill.

Time after time, the story was the same, and I would have to describe the place as it once was, with, I suppose, the longing for the past that plagues us old folks. On our way out of one area, I pointed out a wide spot in the pipeline road and said, “That’s where the checkpoint was.” “Checkpoint?” she said. “What are you talking about?”

I expect some of you will remember the days when U.S. Fish and Wildlife Service and the Alaska Department of Fish and Game had checkpoints during moose season. Hunters would stop and display their animals if successful or report that they were not. I miss those checkpoints. It was always nice to talk with the folks who staffed them, and you would find out what was going on all over the area.

I took her to the place where, in the fall of 1974, two hunting buddies and I had climbed a hill a mile or so from the road and found the “moose crushers.” I don’t know what the technical term for them was, but that’s what we called them. Three enormous machines with two wide steel drums for wheels in the front and another in the back. The drums had deep, sharp steel bars staggered along the surface. Think of the tricycle of childhood dreams.

A heavy steel bar, perhaps 15 feet above the ground, extended in front of the drums. The bar would bend large trees over, and the steel drums would climb over and crush them. These machines crushed thousands of acres in the burns that had peaked, in order to create new browse for moose. They would cut a 30-foot swath through the trees, and we thought that had to be about the best job you could have, given all that you would see in the process of developing that habitat. I wonder if anyone was wishing they were still around about now — a fire-break-making machine if there ever was one.

I had all of those thoughts as I followed the pilot car through what must have seemed like hell to some. The resurgent fire had burned with more force, and the landscape appeared more like a real fire had gone through.

When nature has its way there seems always to be a sublime quality in its wake, and I felt fortunate to be able to see it firsthand.

I did make it home that Friday, and as I made my way back through the apocalypse, I remembered the quote from the ancient Greek historian, Herodotus: “This is the bitterest of pain among men, to have much knowledge but no power.”

When it comes to weather, that is practically the hunter’s mantra, whether it’s an avalanche that kills a band of Dall sheep, a wet spring that kills the upland hatch, a duck pond that dries up in the heat or a fire that leaves favorite hunting spots barren for years. It may be sitting by the phone waiting for the pilot to call with the go signal, or sitting on a mountain waiting for the clouds to lift so you can get home. The hunter’s life is dependent on weather, and there is nothing we can do about it.

As our world changes, we have only to follow the kindred spirit we find in the animals we hunt, and we’ll adjust and adapt and keep putting one foot in front of the other, and be grateful for the opportunity.