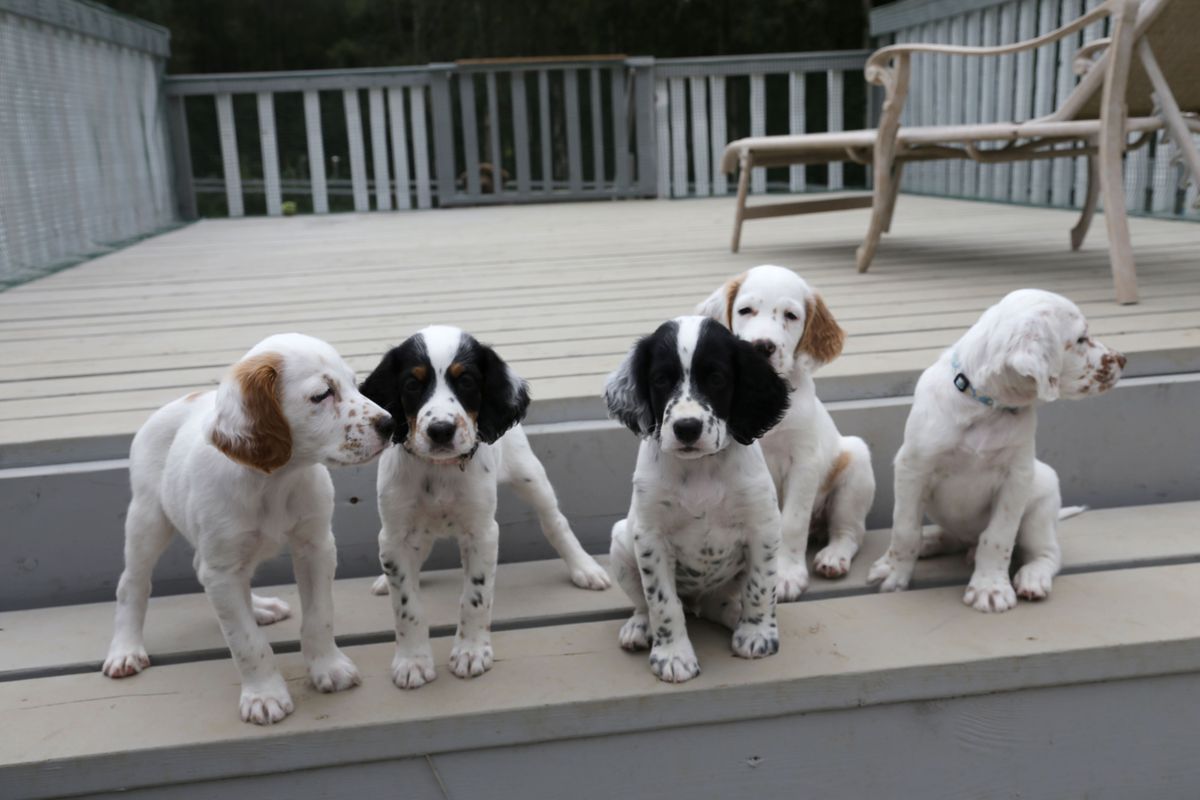 I never learned from advice on how to pick a puppy from a litter. When looking for a hunting dog, many experts recommend selecting the breed first and then narrowing the focus to bloodlines that produce proven dogs.

This general principle is often known as “pick the litter, not the puppy.” My problem is I picked the whole litter.

What seemed like a good idea — breeding two proven bird dogs and keeping two of the pups — turned into one of my greatest life lessons. It’s one I wake up to each morning in the form of five freckled English setter faces at the edge of the bed.

I will admit, raising a litter of bird dogs is not something I would recommend, but there might be some salvation for me in sharing what I’ve learned. If anything, it proved to me that the single characteristics I focused on were wrong. Not everyone agrees on what to look for in a pup, but I thought curiosity and boldness would make a good bird dog. While some suggest picking a dog that isn’t the runt or the largest, both extremes appealed to me.

The runt is going to have to work twice as hard to survive, I thought. The largest or fattest shows a propensity to thrive. These thoughts seem especially ridiculous to me now that I know these things did not turn out to be true in the litter I picked.

When the puppies were only a week old, Steve and I decided not to name them. We didn’t know then that we would keep them all and did not want to get too attached. English setters are usually born completely white unless they have a patch or mask, so we referred to each of the five puppies by their distinct markings.

Orange Spot ate the fastest and the most. Two Spot was a close second — black and white as he was bold and curious. The only female and tri-color (black and chestnut combined with white) we called Three Spot. The No Spot Twins were indistinct in the first days — a close pair of orange beltons (orange ticking, but no patches) that slept and fed together. Within days, one gained an asymmetrical side spot, and they were named No Spot and Side Spot.

I had read warnings about keeping two puppies from the same litter. Friends in the dog training business advised against keeping littermates. They would not bond as closely with their owner. Instead, they would bond to each other and form a “super-bond” that would require individual training sessions.

Two Spot was the first to open his eyes. I held him in the palms of my hands and stared into the foggy eyes that could not see me. They were empty spaces of blue. It was the haze of another world’s mountains. I knew that no amount of advice could keep me from keeping this puppy, and I felt this way about each one I held.

Before the litter was born, a lovely woman told me she wanted a female. She asked to see the puppies so she could choose and inquired as to the price. In my state of mind, the thought of selling one of the little angels for money seemed unthinkable.

Steve piled the puppies into a basket and carried them outside. Until that moment, the only light they had seen or felt was from the heat lamp. We picked each one out of the basket and set them on a blanket on the deck. I poured their food into a six-muffin tin with one empty spot. They were getting older now and were beginning to show that irresistible puppy charm.

Two Spot finished his food and darted away from the dish, and Steve called out the name Colt. It surprised me to hear he had named one of them out loud. It was a good name, and I didn’t want to talk about what it meant to name a puppy.

When Steve referred to Orange Spot as Boss, after a bespoke gunmaker in London, I didn’t argue it. These were his two picks, I thought.

“Cogswell,” I said. That was my name for Side Spot. Steve thought it was perfect. It was taken after the gunmaker, Cogswell and Harrison. But Harrison was too long for the field and didn’t fit the tiny unmarked puppy.

“Hugo,” I said. It was an aberration of Huglu, a Turkish gunmaker. “We can call No Spot Hugo.” Steve nodded.

And, “What about Purdey?” he offered for the name of the girl. He could have called her Benelli, Beretta or Fausti for all I cared. It meant we were keeping them all.

It was five years ago when we gave names to a litter of would-be bird dogs. We enjoyed watching each sign of birdy-ness as a clue as to which of the puppies — perhaps all of them — would make a great bird dog. I remember photographing Boss as he sat on the sunny porch holding a stuffed pheasant in his mouth. If that doesn’t tell you a dog will hunt, you probably know something about bird dogs.

In my notes from back then, I see now how I got it all wrong. I thought Boss and Colt would be the best hunters because they were the best eaters. I figured Hugo and Cogswell would make great house cats.

And Purdey, the lone female, on looks alone, would take after Winchester, her father and an intense bird dog with style to spare. We took them all on individual hunting trips and lived with them in the house like family.

How could we have guessed Hugo, the most timid pup, would be a tiger in the mountains? Boss, who looked like the pick of the litter, loves movie night snuggles more than hard work. Cogswell hunts so close we stick to grouse hunting in the woods rather than ptarmigan hunting in the mountains. Purdey can’t seem to figure out if she is predator or prey and runs so far and fast she has jumped our GPS capabilities twice. And Colt, the sweetest of them all, is selectively scared of gunfire.

Any one of them would make a great bird dog if we had ample time to work on the rough edges. Instead, they are family, and we accept them for better or worse and enjoy a slow learning process together.

People will sometimes ask me if I have any thoughts on how to pick out a good hunting dog from a litter of pups. Yes, I say. Do that. Pick one.