Regardless of torrential rains or elusive fish, recollections of a day on the water improve with time 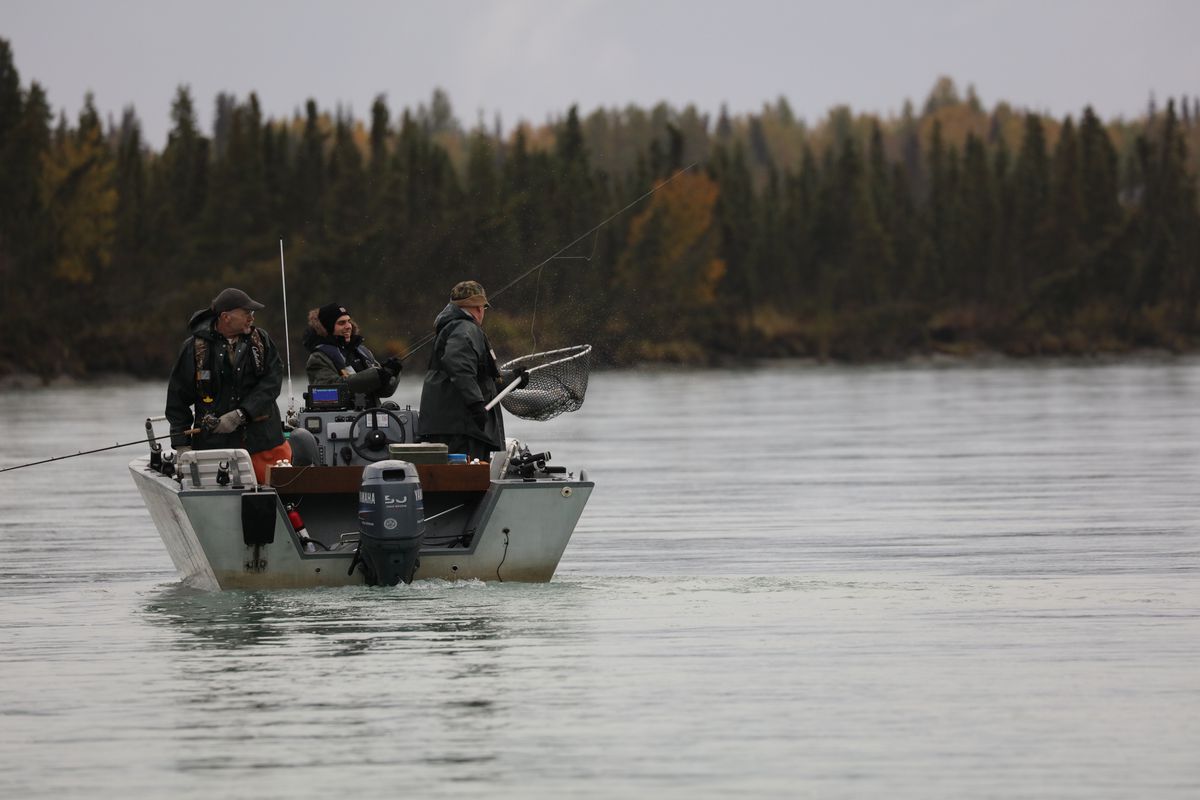 Fishing for silver salmon on the Kenai River. (Photo by Steve Meyer)

Fishing for silver salmon on the Kenai River. (Photo by Steve Meyer)

Whenever I first step out in the rain, when my clothes are still dry and I’m fresh out of the cab of the truck, I love the rain. “It wasn’t supposed to be raining” and “maybe it will taper off,” my friends say as a form of greeting at the boat launch. It’s taken me years to master the art of the weather salutation, and mine is usually optimistic. “The fish can’t tell if it’s raining” and “I never minded a little rain.”

As six of us gathered around the boat in darkness, light from a headlamp reflected in the rain so that it looked and felt more like stardust than a cold shower. Everyone smiled as the boat captain told us he “knocked the puddles out of the seats” and asked if we’re wearing plastic. He doesn’t like the rain, but that’s because he is the one facing into it as we motor out, raindrops peppering his face like hail while we huddle with our backs to the onslaught.

After a few river miles, I began to wonder how long I would pretend to enjoy the rain. There’s an illusion that winter is the coldest season, but I’m more prepared for cold then, and it’s often dry. The wet nature of fall weather can be the worst.

Across from me, my friend has her raincoat wrapped around her like a straitjacket. I wondered why some of us enjoy heading out like this. Instead of sleeping in or taking a day of rest, we are smiling and grateful to be with others who want to start out in the pitch-black rain for a day of salmon fishing. Just as one of us asked why we had to leave so early, we saw the lights from other boats anchored near the shore.

It reminded me of the first time I went for a steep hike into the mountains. As I climbed, it seemed I was doing something impossible, even incredible. I hadn’t seen anyone on the trail, and I commended myself for being one of the few. Yet when I dragged myself to the summit, there was a crowd of friendly faces. Most of the people I saw at the coffee shop each day were there, having the same conversations, and breathing easy.

So often in Alaska you think you are a rare breed full of fortitude until you meet others hiding behind the backcountry bushes, or pull into a packed parking lot at a fishing hole after midnight, or see a group of duck hunters setting out four hours before first light when you thought you were the only one crazy enough to be there that early. Such is the independent spirit of Alaska and the myth of untouched wilderness.

The captain got to his spot first. “That’s the problem with being first,” he said. “You got to make a decision.” I love this captain, who has been a guide on the Kenai River for more than 40 years, since before you had to have a license to fish. His day at the office is an adventure for everyone else on his boat.

The stories started early — my friend rolled her kayak when she made the mistake of using a downrigger for winter kings in kelp out of Kachemak Bay. The captain asked if she was one of those “yakkers” that got in the way of boats at the launch. It was nice being around people who speak freely, laugh often and tell you how they really feel.

Another friend reminded me of the first time we took her son duck hunting so many years ago. We had run into another duck hunter who asked us if we could identify some exotic ducks he had shot that morning. He thought they might be from South America. They were white domestic ducks, and none of us could remember if we had the nerve to tell him.

The captain talked about the old days of Alaska, and these stories are my favorites. He remembered how the state seemed to him when he first arrived in the 1960s: “Everyone carried a gun and a knife on their hip.” He told us what it was like to test for his guide’s license and how many belugas there used to be at the mouth of the Kenai River. “They used to have beluga barbecues,” Steve said. “Remember that?”

I wasn’t paying attention when my rod went off and I threw a handful of grapes into the air. The silver fought but not as much as the captain as he unhooked from the buoy and struggled to drive the boat, net the fish and tell me what I could do better. When we had the fish in the boat, I stared at the bright chrome body and angry salmon face — such a beautiful fish.

Some mornings you might think you are going out for fish. But as the day progresses from rain, cold and darkness to stillness and those moments between conversation when there don’t seem to be many fish, you might think again, why am I out here? You know that in your memory the day will not be remembered for the rain or cold or the lulls, or even the particular salmon caught — unless there was a flood or a remarkable fish.

“Everything grows,” the captain told us, and he was talking about the size of fish remembered. A client will return and ask if his guide remembers the 70-pound king he caught, and the captain will remember it was 40 pounds.

But, he’s right. Everything grows. The small details — hunger, cold, impatience — disappear almost immediately when a fish hits. And at the end of the day, it’s all about the river, the stories and the friends you love to be with.

And the 25-pound silver that only I remember.