Missing is a fact of hunting life. So is having no sympathy for the person who missed. 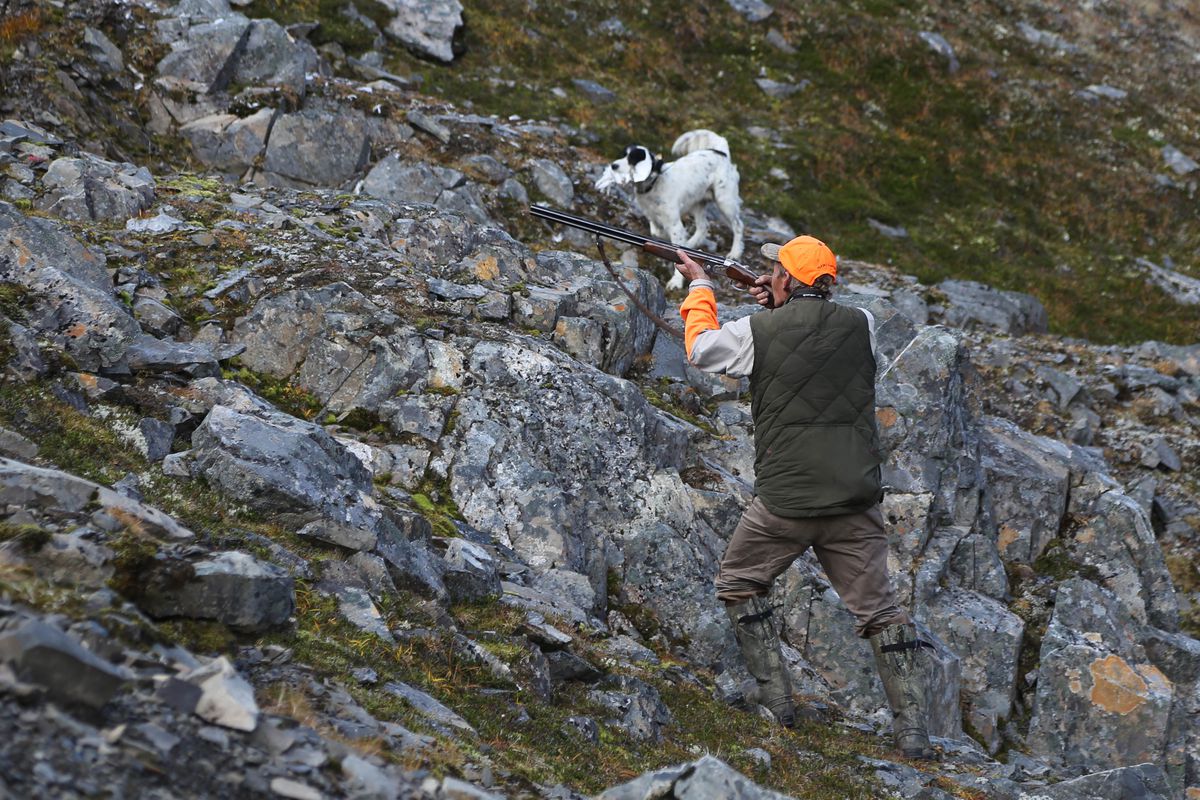 This photo makes the author imagine Winchester is thinking up a sardonic comment, should his partner miss. November 2014. (Christine Cunningham photo)

This photo makes the author imagine Winchester is thinking up a sardonic comment, should his partner miss. November 2014. (Christine Cunningham photo)

The small flock of lesser Canada geese appeared out of the morning fog, squabbling in flight like they always do. It first appeared they would pass by well out of range. But geese do what they want, and they turned to the west and passed by in range, over the big slough we sat along.

“We can’t let her retrieve more than one, it’ll be too much for her, so you shoot,” Christine said, having as much faith as I did that a goose would drop at the shot.

With the slap of the trigger, twice, the goose never faltered, didn’t even stray off course as he led the small flock over the slough. Dumbfounded, I broke the shotgun open, shaking my head.

“You didn’t shoot,” I said to Christine.

“I was so sure you were going to kill one, I wasn’t even thinking about shooting until it was too late,” she replied.

I looked to Cheyenne and said, “Sorry pumpkin, I think it was these new loads I am shooting,” while thinking to myself it wasn’t the damn loads, it was me — I lifted my head. Cheyenne cocked her head with an adoring look that suggested I was forgiven.

“Yes,” Christine agreed, “you weren’t sure about them.”

In spite of my best efforts, Christine has still not come to that place in the hunting arena where there is no sympathy. What she should have said, while laughing, was, “It wasn’t the loads, a 4-year-old shooting bird shot could’ve got that goose.”

Missing is a fact of hunting life. A hunter who claims he never misses is either not shooting much or perhaps has one of those memories common to the hunting fraternity that allows you to “forget” you made those bad shots.

That doesn’t mean there isn’t a lot of fun to be had among the misses of hunting companions you share the field with. By the sheer volume of shooting opportunities, wing shooters, and in particular waterfowl hunters, have more chances to miss than most. But the worst example of missing I’ve seen in my long hunting lifetime was on big game.

My hunting partner and I were driving along a pipeline road, headed back to camp in the evening. Rounding a corner, we saw a pickup stop on a hill overlooking a long open field that had been crushed in the early 1970s. Two young fellas jumped out with rifles, ran to the front of the truck and started shooting. We moved ahead a bit and saw the bull moose, perhaps 100 yards out in the field.

They emptied their rifles, reloaded, emptied them again, and repeated until they ran out of ammunition. Evidently their shots never came close. The big bull just ambled off, never showing any sign of distress.

There wasn’t much joy in watching that level of incompetence with firearms, and I couldn’t imagine what you would say to the two others than, “Do your parents know you have guns?”

From the time I started tagging along with my dad and his hunting buddies, I was always around hunters who could shoot. When they shot, they expected the intended critter to drop. On the rare occasions they missed, there was hell to pay. That’s the kind of folks I have hunted with all my life and that’s where missing can instill camaraderie and humor.

I’m not talking about wounding an animal here — for a hunter, that’s the worst outcome. I’m talking about the clean miss, where the quarry runs or flies away untouched, and the only injury is to the pride of the hunter who misses.

But there are more rules. Christine was still getting the hang of wing shooting when we were hunting sea ducks one cold December day. I had the flu or something and was throwing up over the side of the boat when one of my old hunting partners hollered, “Skunk head on the right, Steve.” I grabbed my shotgun, my nose dripping vomit, dropped the duck in the decoys and went back to hurling in the salt water.

“Did you see that, he was vomiting and he got that duck,” Christine shouted.

“Yeah, can you grab me a sandwich out of the cooler,” my old buddy said.

Hunters who have been behind the trigger all of their lives have the expectation that when they press the trigger, they hit what they are shooting at. If that expectation isn’t present, you don’t shoot, thus, there are no great shots. Christine just didn’t understand.

A few days ago I was in a duck blind with three other guys, every one of them great waterfowl shooters. They’re the kind of hunters whose dog doesn’t wait to be told to fetch; he is on his way when the shooting starts with the certain knowledge there will be ducks for him to bring back.

After the first flight of ducks came in, the oldest of my buddies (even older than me) and one of the best I’ve ever had the pleasure to hunt with, was cussing a blue streak. He had clean-missed the first and best shot of the evening.

One of the other guys said something like, “You want one of us to get your blanket so you can crawl off and suck your thumb?” Among accomplished shooters, there is no sympathy.

A bit later, I missed an easy shot. After a minute, my old buddy said, “Well?”

“What’s your excuse?” he said.

“I wasn’t planning on missing, give me a minute to think one up,” I said.

The excuse is the best part, and the better one you can come up with, the better your spot in hunting lore is secured.

“It’s my wife,” a hunting partner once said after a miss.

How can your wife be the fault of your missing, we wondered?

“Well,” he said, “my wife and I are connected in spirit, we feel each other’s pains.”

“She’s going into labor and she had a contraction just as I shot,” he said with a straight face.

As Christine and I walked back to the duck shack, goose-less, she was muttering under her breath.

“I was just saying you really could have come up with a better excuse for missing Cheyenne’s goose,” she said.

I grinned back at her and said, “Maybe there is still hope.”