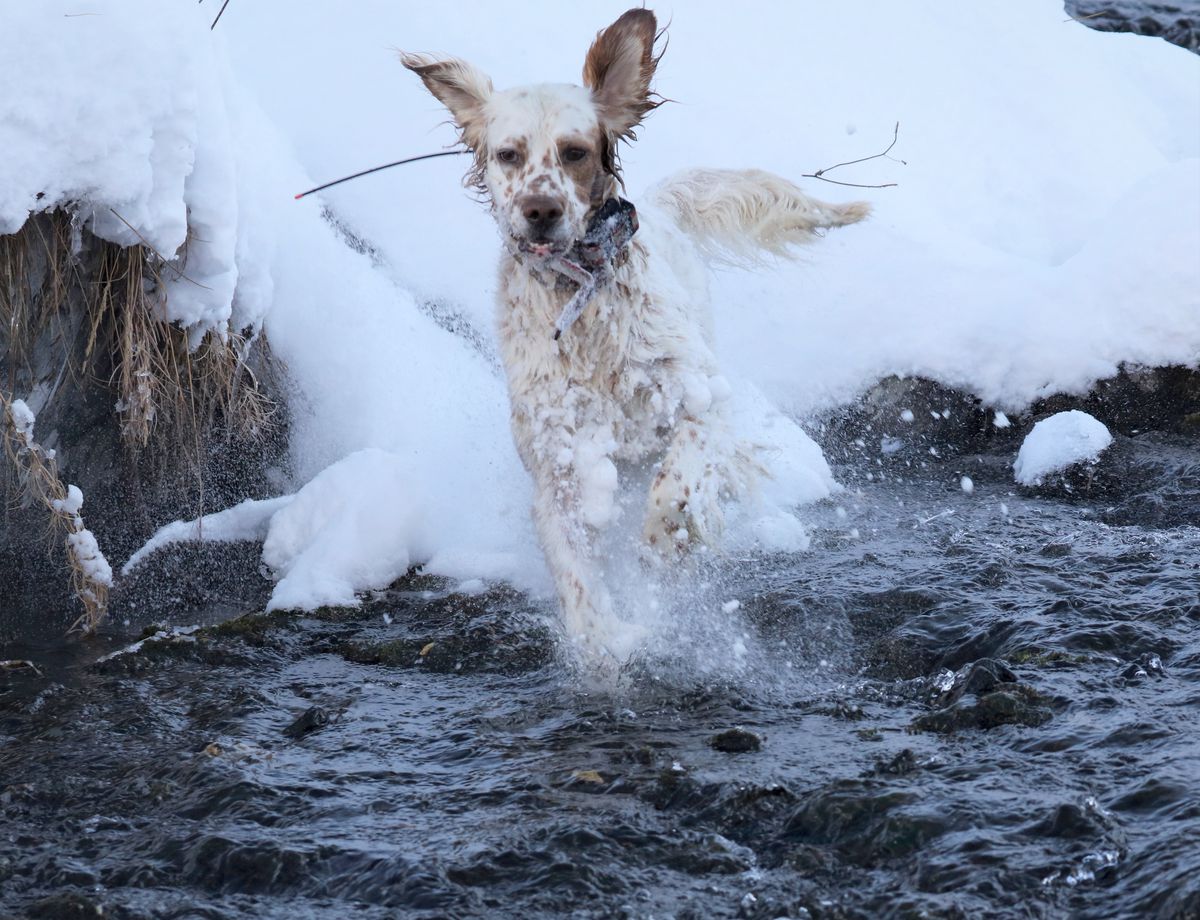 Hugo hunts birds on the Kenai Peninsula in Oct. 2019. (Photo by Steve Meyer)

Hugo hunts birds on the Kenai Peninsula in Oct. 2019. (Photo by Steve Meyer)

More mornings start cold than warm during the long bird hunting season in Alaska. For most of the state, the upland season begins in August. The waterfowl season follows in September. In the beginning, we set out early each morning, noting the “warm” temperatures.

Forty-five degrees is warm if you plan to hike into the mountains or slog across wetlands with a sack of decoys. As easy as it is for me to forget that there was a time in my life I would not “outdoor” under 60 degrees, it doesn’t quite seem like hunting without a morning that starts below freezing.

October is the month that reminds me. My clothes and boots begin to require a change. The outer layers come out from under their dust coatings. The old box of hats and gloves looks like the mismatched sock drawer of yesteryear. I still haven’t given up hope that I will find the mate to a favorite glove — or two — as I dump the entire box into the washing machine. It feels like Christmas to discover my favorite snow boots in the back of the closet. Crampons and snowshoes feel more like New Year’s resolutions. I have never remembered to take them the first time I need them.

A few years ago, I wasn’t ready to embrace winter just yet. Hugo, a 3-year-old English setter, was just beginning to discover birds. He had run the Kenai Mountains on as many days off from work as I could afford and my body could bear. Dogs are creatures of routine, and these day trips were his adventure of the week most of the year. I often wondered if he craved new places or if following the tracks of birds on the air in the same mountains year after year was always original and exciting, ever a mystery.

Snow dusted the areas we hunt most often. We had watched the bright fireweed burst to life, climb and fade to a silky lilac on the wind. I wasn’t ready for the shock of sunlight against white slopes. If I projected my reluctance to embrace winter and prolong fall onto a dog, I conjured reasons along with excuses.

“Let’s take Hugo to Idaho to hunt chukar,” I said to Steve, as if it just occurred to me with the latest low-fares email.

Why wouldn’t a dog want to cover new country and discover new birds? And, if anthropomorphism failed, I used my best argument last. We had taken Winchester, Steve’s most beloved bird dog and Hugo’s father, on several trips Outside. Each one had marked a turning point in Winchester’s development as a hunting dog and deepened our bond.

Hugo grew up on wild birds, but they were faint-scented alpine birds that held for a point. White-tailed ptarmigan, rock ptarmigan and even the sub-alpine willow ptarmigan belong to cold places. They exist as an “invisibleness” in the wild places you find when you climb over the last false summit, and the sounds of the world below fall audibly silent. Or, you suddenly see their shape materialize from the landscape at your feet. The discovery is much like the threshold of any adventure. There is a short gap in time that transports you from the known to the magical and strange.

I had called white-tailed ptarmigan the “quail of the north” many times without having ever seen a quail. They are both small and “polite” birds — traits I had learned firsthand about white-tails and only in books about quail. In the same way, I had read stories about chukar. They were called “devil birds” that lived in the high country. It might be as good for Hugo to learn to hunt another species as it would be for me to learn what I’m talking about.

He did not seem a bit alarmed when we loaded him into the airline crate for the first time. He was born in our living room and had grown accustomed to long trips in the cab of the truck. When he jumped out of the rental car in southern Idaho, he plummeted into a world of parched basalt rock and the overwhelming scent of sagebrush. He didn’t hesitate to run ahead of us, the same as he did in the mountains of Alaska.

As we hunted chukar, I wondered what bird Hugo was hunting. The three of us found ourselves telegraphing our presence to unseen birds that, in turn, echoed calls across the canyon. Hugo worked frantically to find the source of scent and sound that seemed everywhere and nowhere. My thoughts followed him as he ran to the edges of cliffs and stopped, not to point but to ponder the same thing I did. Where are they?

On our second day, Hugo’s focus was reaching a pitch. He ran through thickets along a creek bed as if he were running down hallways deep in his mind, before memory. He was in a world of his own, searching for something he could only recall in his blood, a bird he had never seen.

And suddenly he knew something I didn’t. He angled into a thorn thicket throbbing with life at the bottom of a canyon. Quail ran along the ground ahead of him and hopped onto low branches, but he didn’t relocate.

His solid point and certitude slowed time before the flush, and my two shots stole a moment from my memory. The birds were on the ground and I was on my knees, picking up the male first. The sharply dressed bird was as colorful as the country; his breast was the color of juniper berries, his flank pin-tucked with a chaparral tweed, and his plume fell forward of a tiny beak and closed eyes. Holding the warm body, I realized my hands were shaking with the gravity of killing these beautiful birds. Hugo was already on to the next covey.

I picked up the other bird and held the pair of California quail. We would clean, cook and eat them that night. I wondered through it all how I could ever think white-tails are the quail of the north or that Hugo was interested in ornithology.

Before we left, on the last day, I could hear the chukar we never brought home in the vertical distance. That’s why they are called devil birds — the way they run uphill and their laughter at human misery. How quickly the newly discovered becomes what is left behind, I thought.

Hugo did not need to travel to figure out that it didn’t matter if we are in familiar mountains or a new place — there is always something like a bird to hunt that moves in flight ahead of us. Sometimes it is far beyond, and we never get to it; sometimes we chase, and it escapes. Often, the things that sustain us are also an eternal question we come home to in ourselves each night.

This year, I’m ready for winter.