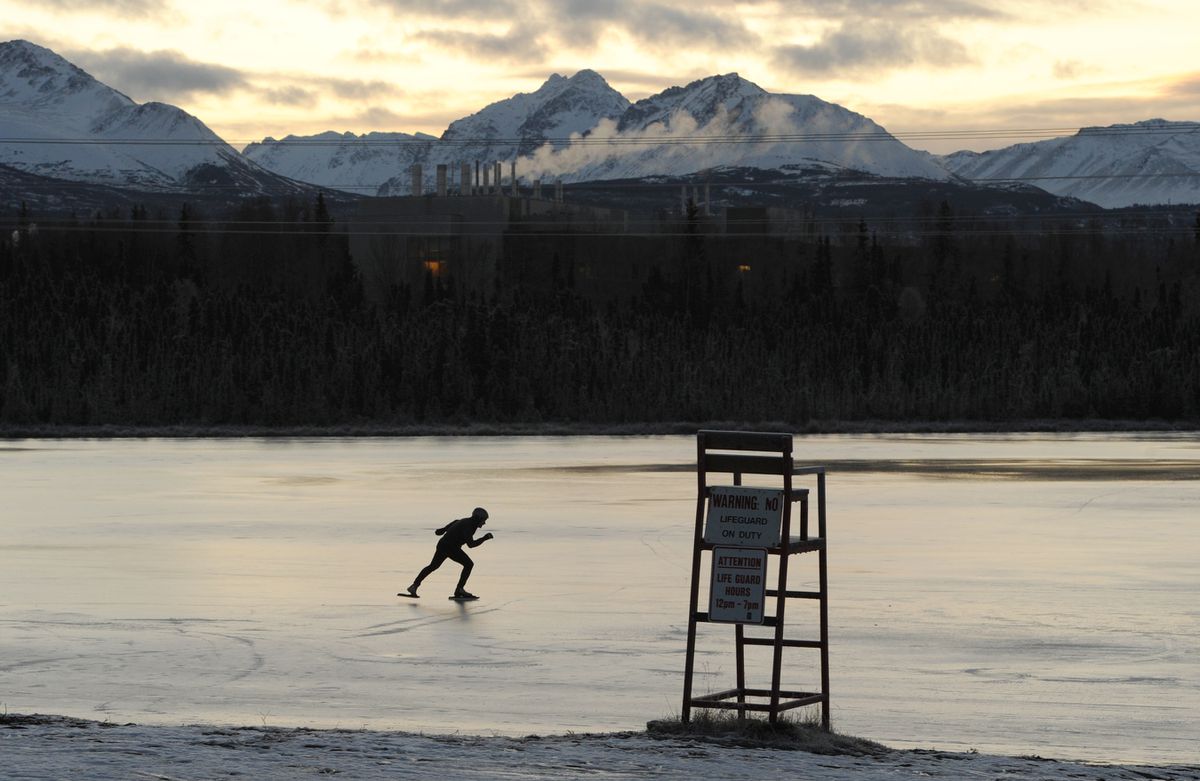 Peter Oswald glides across the ice on nordic blades while skating at Goose Lake before sunrise on Wednesday, Dec. 11, 2019. (Bill Roth / ADN)

Peter Oswald glides across the ice on nordic blades while skating at Goose Lake before sunrise on Wednesday, Dec. 11, 2019. (Bill Roth / ADN)

When I first landed in Alaska in 2008, a new friend advised me: Enjoying winter is all about getting outside. If you like outdoor winter activities, you’ll be fine.

That first winter I ran into him on the trail. It was minus-20 in Anchorage and I was wearing every piece of clothing I owned at the time. I recognized him before he recognized me — after all, at that point I knew about five people in Alaska.

I loved it out there. The hoarfrost in the subzero temperatures lifted a clean, white layer into the air that sparkled in the low sun. I walked around for as long as I could. Eventually I invested in some skis, and one day I even purchased this thing called a “car” that allowed me to explore places beyond the Anchorage core.

Then came the year that my friend bought a fat bike. He sounded almost sad about it.

“Climate change,” he explained. “This year I just said, screw it, if the skiing’s not going to be reliable I need something to get me outside and keep me sane. I’m hoping this will do the trick.”

That comment has stuck with me. Even over the past 10 years, winters have evolved into something remarkably different from when I first landed. They are uneven now. Maybe it’ll rain on New Year’s, which to me has a sacrilegious-level depressing feel to it given we’re about as far north as far north can be.

In Southcentral Alaska, the snow on the roads doesn’t stick like it did years ago. It used to be that we pretty much made up the lanes from October through March when the actual lines on the road weren’t visible. Now more often than not, I can see pavement on my running route.

Yes, I realize 10 years up here is zero time in the grand scheme of things. I’m not citing my own scientific study; there are plenty already out there, and plenty of Alaskans who have more years on me in terms of experience and history.

But, this is for sure: I need way more tools to enjoy a winter than I used to.

My winter toy box before pretty much consisted of skis. Classic skis and skate skis, and if I were a braver person that arsenal would also include downhill or backcountry skis.

I still have the skis — and still want to learn backcountry skiing sometime; I keep kicking the can until I’m ready to really invest in the avalanche awareness training and tools. But over the years I’ve also added studded running shoes, a fat tire bicycle, lightweight crampons for hiking, nordic skates and a small plastic sled.

The studded running shoes come in handy for running in pretty much any weather. We’ve had some icy stretches over the past month or so with the freeze-thaw cycles, and these shoes enable me to get outside even when I am disgusted with the weather.

The fat tire bike is similar, although I do need to get some studded tires so I can access more trails in varying conditions. Still, my non-studded tires have served me really well. Letting out pressure from my tires in slick or soft snow conditions usually gives me plenty of tread when I’m not riding on straight ice — that’s when I need studs. I’ll get there, someday.

Lightweight crampons are a godsend for icy hiking. I have the Kahtoola Microspikes, which are pretty much part of the winter hiker’s uniform in Palmer. I call them my Alaska stilettos. They make me feel invincible, and again allow me to access more of the outdoors than I would otherwise.

Nordic skates are for those brief and glorious windows when there’s been a thaw followed by a freeze-up, but there’s not yet snow. Rivers and lakes open up for skating. It truly feels like cheating the fates to be able to have so much fun outside even when it is abnormally snowless. The clip-clip-clip sound of skating along, comfortable in my skate ski boots while gliding, is meditative and addictive.

And, of course, the small plastic sled is good for slightly packed snow conditions. As long as there is some snowpack up high, even if it isn’t fresh, the little sled that I can clip onto my backpack saves me some time on my feet on the way back down. Plus, it makes me feel giddy.

A close second to the sled is just sitting down and going for it, if the trail is steep enough and the conditions are right.

Through the ups and downs of winter, my biggest survival tool is trying to roll with the ups and downs. Right now, it’s glorious. It’s beautiful. It’s winter — and thank you very much, that’s where I live. I know it could be fleeting and I need to enjoy it while it’s here. And when it is gone, I try to remind myself that the next week or the following could be a different story. I take it day by day.

And when all else fails, yes, I book myself a flight out of Dodge.

Allí Harvey lives in Palmer and plays in Southcentral Alaska.