Whether inside a shanty or outside on a camp chair, ice fishing reveals the wondrous world under your feet 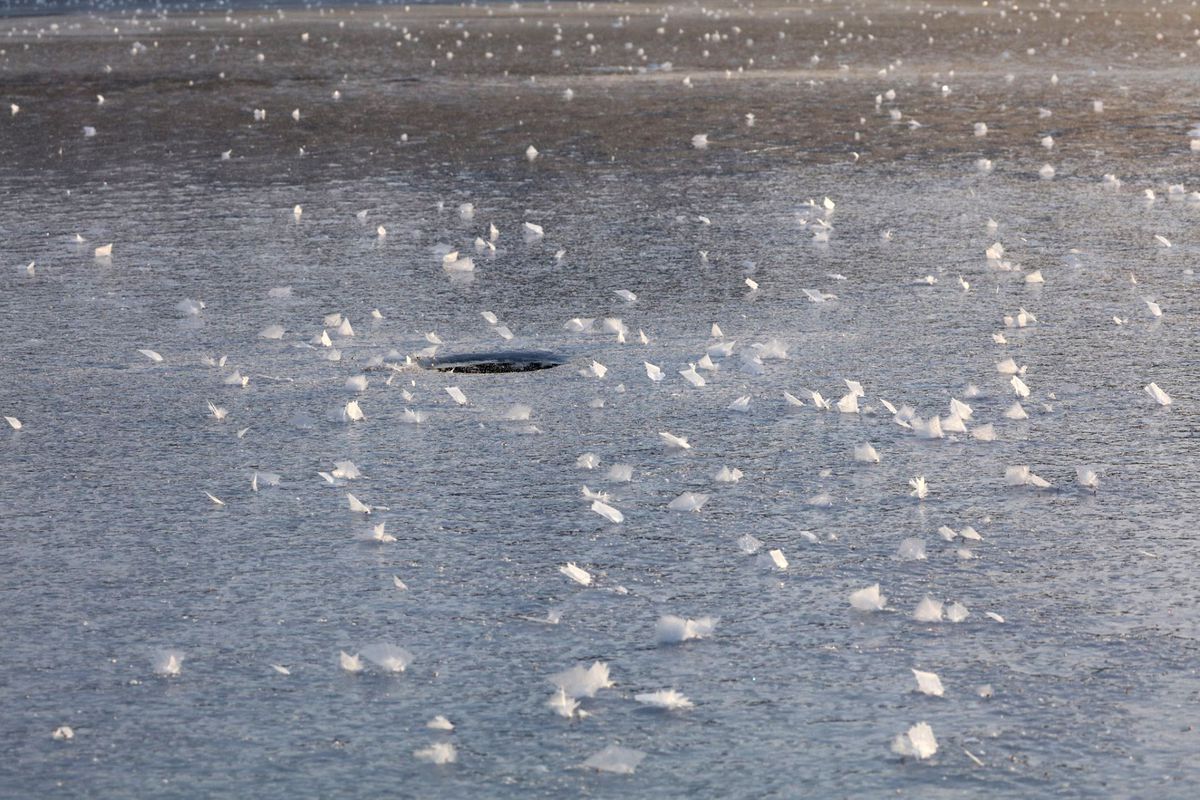 My fascination with ice fishing has almost as much to do with the ice as the fish. Some associate the activity as something for children or grumpy older men. But I was not exceptionally young, old or irritable when I first fished through the ice almost a decade ago.

On that first venture, I noticed several holes already cut through the ice on the lake. Some of them were still open, the width and depth of a 2-pound coffee can. This image came to mind not just because of the similarity in size but because the 6-inch auger used to cut through the ice left marks like the rims of old metal coffee cans.

“We don’t even need to drill a hole,” I told Steve.

But he wasn’t interested in the pre-drilled holes near the start of what would be our mile trek across the lake. He looked for points or an inlet or outlet stream. I’ve never known him to fish near where the access was too easy.

I followed him as he passed by the holes without so much as a look. Now I understand his lack of interest. First, they were not in the right spot, and second, they didn’t show any sign of having produced a fish. The ice around the hole did not have any scales, slime or even blood.

It may not matter in the context of a fishing tale, but I stopped to have a look. The perfect circles were interesting to peer inside. One hole was half-frozen in the shape of a crescent moon. Another had a frozen leaf preserved in ice just below the surface.

The thin crust of ice gives a better impression of what is below us than walking on solid earth, where we might be under the illusion that nothing is living in the soil. When fishing through the ice, I am more aware of the vibrant world beneath my feet. It’s a wondrous space and feeling.

Our routine remains the same today as it was on that first trip. I drill one hole, and Steve drills several in a strategic pattern, sometimes as many holes as would make a golf course. I set up my shanty and fish the same hole. I’ve usually got a heater, a book and lunch. Steve fishes from a camp chair in the open air without shelter or snack.

Despite our varied methods, we catch an almost equal number of fish, and I think this is because he loses so much time auguring, pacing between holes and switching lures.

Early on, I appreciated his advice on how to jig, tie a particular knot and other essential instructions. As time passed, I settled into my preferred ways. Variety is not the spice of my life — quite the opposite. I prefer one knot and one lure for almost all occasions.

Certain mysteries of the lakes revealed themselves to me over time. It turned out that Steve had not mapped and cataloged most of the lake bottoms by drilling and jigging, carefully measuring the depths by counting how much line goes out before the lure hits bottom and then committing it all to memory. This useful information on the underwater contour of a lake can also be found on the Alaska Department of Fish and Game website.

Despite the available information and an increase in technological innovations, fishing for me is more of an art than a science. There is no perfection in it. Like art, it is an expression or a becoming, rather than a result of methods and means.

As the philosopher Heraclitus is famous for saying, “No man ever steps in the same river twice.” This ever-changing aspect of nature may not be as true of the man-made settings that make up most of the world indoors. I seem always to be stepping into the same shower.

Fishing, on the other hand, is infinitely varied. One of my favorite things is to note the condition of the ice. There are so many kinds of ice. I don’t dare begin to start naming them or I might sound like I am naming the types of rain, snow or shrimp in some parody of the obsessed.

This year, the lake did not seem like anything extraordinary. From the road, it looked smooth, bare of snow, and perfect for ice skating. Yet when we stepped onto the ice the morning sun caught the edges of what appeared to be a variety of hoarfrost set up like chips across the lake.

As Steve headed out to a point between an island and the shore, I stopped to examine these ice “creatures,” most of which had a pair of snowflake-like wings melded to the ice. The tiny formations each had a life of its own. Instead of thousands of flakes, they were more like a flutter of ice butterflies scattered about the lake.

We fished the morning and into the afternoon. Steve caught several Arctic char outside while I had not hooked a single fish from within my shelter.

Finally, he offered up one of his holes and even his rod. As I began to jig, he gave me some advice on technique. It might be helpful for others to note that, among the equally gifted, advice from the successful party to the unlucky one may not be the most welcome.

Yet, 20 minutes later, I had not caught a fish and I headed back to my warm shanty. Just as I zipped my door shut and was about to sit down, he yelled, “I got another one!”

Some fishermen are fond of saying the secret to fishing is “the way you hold your mouth.” I first heard this expression from Steve, who was little help in explaining what it meant (“It means if you’re not holding your mouth right, you won’t catch fish.”)

Apparently, I was not holding my mouth right that day.

I think it’s true for anglers of all ages, genders and attitudes that catching a fish is wonderful. But anytime you experience something that intensifies your connection to nature or your partner, that gives you a sense of wonder, makes you laugh, or is so beautiful you will never forget it, you had a good day fishing.