Even if you don’t have a gun rack in your truck, it’s useful to have a truck gun 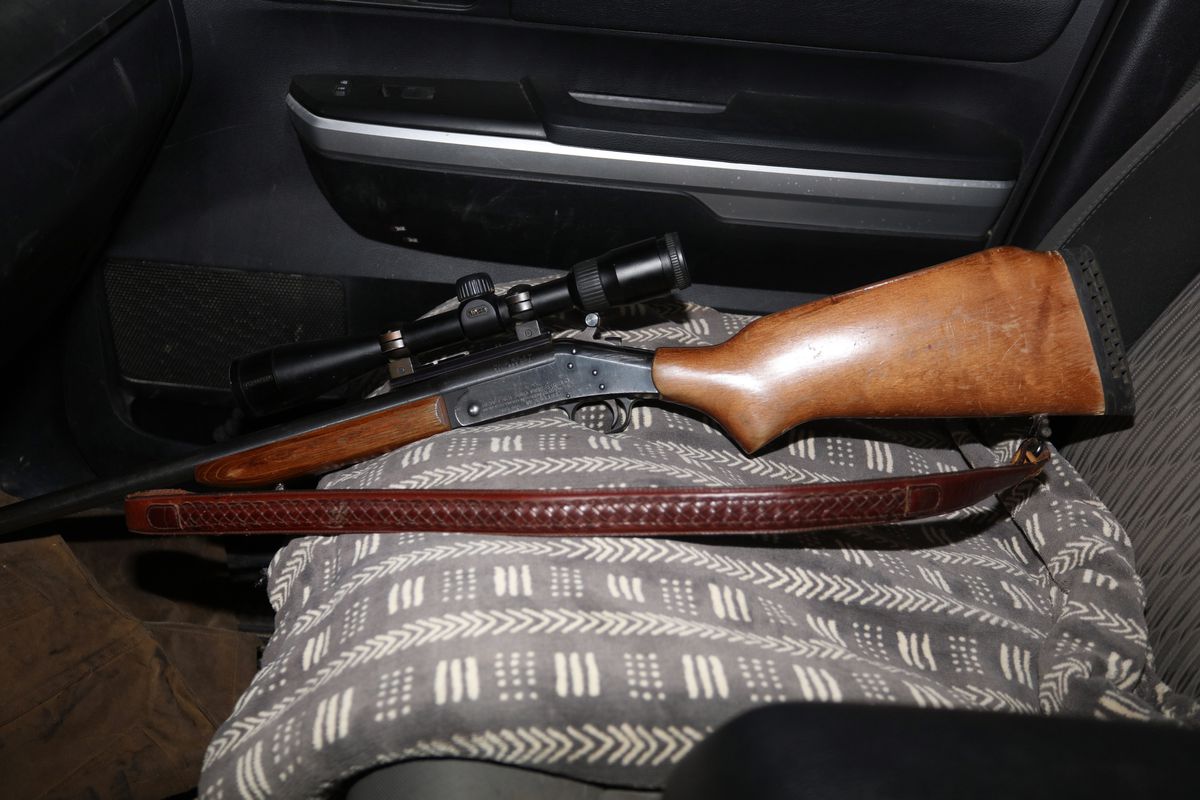 Steve Meyer’s truck gun isn't much to look at, but it serves its purpose well. (Photo by Steve Meyer)

Steve Meyer’s truck gun isn't much to look at, but it serves its purpose well. (Photo by Steve Meyer)

“Too bad we don’t have a rifle,” the driver sitting across from my open window announced as a coyote came out of a brush line a couple of hundred yards away. We had met and stopped along a back road outside of town that I frequented during lunch breaks, preferring the drive out to see what was up in the country to sitting in a restaurant.

I was dressed in a suit and tie for a court appearance in the afternoon, and showing up stinking of coyote and smeared with blood would not be a good choice.

“You have a rifle,” my friend asked.

“Why do you have a rifle?” he asked. “Don’t you worry someone will steal it?”

The first question surprised me. It had never occurred to me that I wouldn’t have one, and I explained that I had it locked to a cable running through the floorboard when I wasn’t in the vehicle, and I kept it covered.

Growing up, we always had firearms. They were no different than the tow rope, shovel, handyman jack, ax, saw, screwdrivers, crescent wrench, channel lock pliers, a jug of water and wool blankets that occupied a toolbox of some sort in the vehicle.

The “truck gun,” as we referred to it, was an inexpensive rifle that stayed in the truck year-round. It, along with everything else, was a problem-solver. If you broke down, got stuck, came across someone who needed help, encountered a downed tree on the road or you needed to shoot something, you had what you needed.

When I was old enough to drive and bought my first truck, it had a gun rack in the back window, and the slots were always occupied by guns of some sort while it sat in the high school parking lot. Most trucks in those days had a gun rack, and there was a rifle of some sort and often a fishing rod nestled in the rack’s cradles. It was as normal as wearing clothes.

Years later, the population grew, along with a criminal element willing to bash out a window to steal a gun from the rack in the truck. Truck gun racks have all but disappeared. They are tucked away, out of the view from the criminal perusing vehicles for a snatch-and-run of whatever item of value they might see. Yet the truck gun prevailed, relegated to more secure methods of storage in a vehicle.

It was along this same time that the beautiful wood and glass gun cabinets that used to adorn the living rooms and dens of folks who lived the hunting/shooting lifestyle began to disappear. As a kid, when the family went to visit hunting friends, I would go to their gun cabinet and stare. They were as mesmerizing for me then as a video game is for kids today.

For the same reasons gun racks in trucks have all but gone the way of the passenger pigeon, gun safes have replaced gun cabinets. For theft prevention, they are fabulous; for keeping the spirit of a lifestyle and tradition alive, not so much.

Truck guns, like the sidearm one might carry for personal protection, have to be accessible to be useful. Some years back I drove to North Dakota for a bit of winter predator hunting. The rifle I took was in a locked case in the back of the truck while traveling through Canada. On my return to Alaska my intent was to take the gun out of the case in the event I saw a wolf, fox or coyote.

By the time I crossed back in Alaska at Beaver Creek, I was rung out and just wanted to finish the drive. In other words, I was lazy. Perhaps 50 miles into Alaska, standing in an open area bordered by black spruce, stood a black wolf, maybe 150 yards off the road.

The wolf continued to stand there watching me as I came to a stop. If I had put the rifle up front as I intended, I am sure I could have gotten out and stepped off the road for a shot. But getting out to unpack the rifle and expecting the wolf to hang around was a bit of a stretch, so the wolf and I watched each other for a while, and then he strolled off into the spruce.

A couple of years ago, Christine and I were traveling a road in the Interior, a long way from much of anything. It was fall, and moose and caribou season was open in the area. We came across a construction project on the road.

The project was in a sweeping valley where the road led down to a small river crossing that was being rebuilt. The surrounding area was quintessential moose habitat. A flagger stopped us at the top of the hill.

After a moment, Christine asked, “Are you seeing what I am seeing?”

I couldn’t help but grin. “It looks like there are still folks who understand what it means to be free in America,” I said.

There were several pickups parked haphazardly throughout the construction site, all bearing the signs of the company doing the work. A number of them had gun racks mounted in the back windows, and they had rifles in them. The flaggers and construction workers who weren’t operating equipment were glassing the valley with binoculars every few minutes from the roadside and atop vehicles while they worked.

Christine clapped her hands in delight. “They’re moose hunting!” she said. Alaskans taking the opportunity for winter meat with the chance they had.

The truck gun is still alive and well, and if you get far enough away from the prevalent criminal element, it isn’t sequestered in hiding for fear of its owner being relieved of the pleasure and usefulness it brings.

I suspect the answer to my friend’s question, “Why do you have a rifle?” is best answered with another question. Why wouldn’t I?