When a rainy day turns into a wondrous, wintry night, everything is right with the world 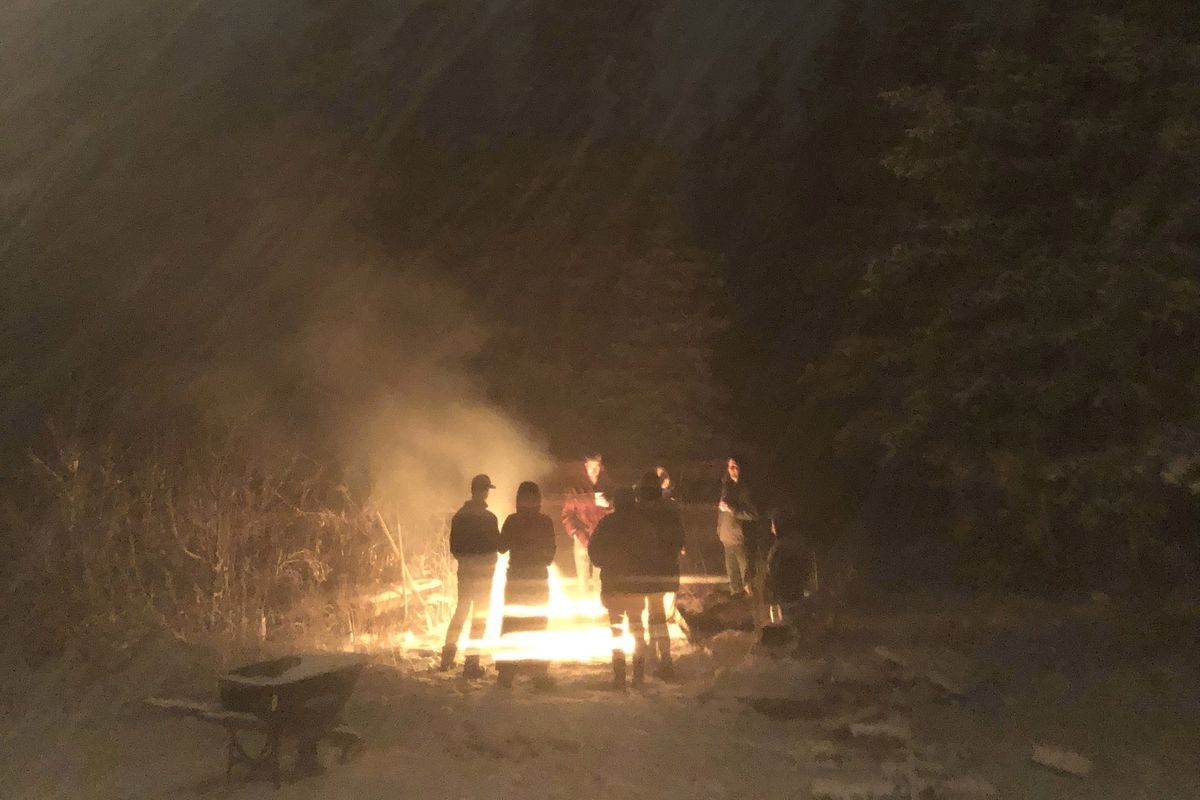 New Year’s Eve in the Butte. (Photo by Heather Wilson)

New Year’s Eve in the Butte. (Photo by Heather Wilson)

I felt rattled and grouchy the whole day leading up to New Year’s Eve. It was windy and warm in the Valley. I had a friend visiting from out of town, and I wanted to show her a real Alaska winter, but it wasn’t happening, at least not in Palmer.

The wind pushed clouds dramatically across the sky and scraped the ground. We went on a little road trip to Wasilla to pick up a pile of pallets for a bonfire at my place later that night, knowing all the while that if the wind didn’t die down we wouldn’t be burning anything, and that rain was in the forecast. Supposedly the rain would be chased by snow, but my mood predicted otherwise.

I’d planned on taking my friend for a hike up Lazy Mountain, which is notorious for having a name that does not describe at all what it’s like to hike the mountain. But with the wind scouring Palmer even after our errand, I decided that perhaps a quick jaunt up 800-foot Bodenburg Butte would be better.

We arrived at the trailhead to find no other cars.

I put on my game face, which is basically forcing a smile and hunkering my head down for an uphill walk while getting buffeted by horrible Valley winds.

You know how this story goes, though — the dread is often worse than the event itself. Once we started hiking and I could see how much my friend was appreciating the view of the panoramic valley floor as we worked our way higher, I started to enjoy myself despite the wind.

Actually, the wind added a new element to an otherwise routine hike. Old snow drifts were completely flattened. The air felt charged. Clouds skidded between mountain peaks, revealing and concealing the sun and bright streaks of blue sky behind them.

It was a whole show. We stopped multiple times along the way to the top so she could take pictures. My mood started to shift. I realized I wouldn’t be out on that hike were it not for my friend. Maybe there was something to this thing for me, in the new year — something trite but true about pushing out of my comfort zone. There’s a difference between real danger and not quite being sure if I’m up for something. At this point in my life, I can afford to be less comfortable in order to get perspective on the world and grow.

At the top we stretched our arms out and let the wind pummel us as we leaned toward it. There was a family who had hiked up from the other side. They all huddled underneath the tippity-top boulder. The kids bravely took turns summiting to get a quick snapshot and then ran back down to the windbreak.

On the hike down, I started feeling ready for New Year’s. I felt optimistic. Rain be damned. Hopefully, I thought, the rain would come and then the wind would clear out. Friends would bring their raincoats, we’d build a bonfire hot enough to evaporate the rain right off us and together we’d ring in 2020. I stopped dreading.

When we got home we peeled off our muddy outer layers, got into dry clothes and made cocktails. We set up generous piles of assorted foods onto a platter that could be called a charcuterie board and made a batch of gluhwein to mull on the stove. Eventually it was 7 o’clock and we were chatting and picking at the cheese board. Then it was 7:45, 15 minutes before our scheduled bonfire.

It was starting to rain, but the wind was gone.

We went outside and stacked the pallets around a pile of cardboard from our recycling. My friend lit the match.

In minutes, the blaze was matching the pace of the rain. Meaning, it had started pouring. The fire in its pit was big and hot as we stood watching it, the front of me hot but wet, my sides and back drenched. Somehow I still felt optimistic.

I saw the first headlights roll in and could see how heavily the rain was coming down. I stood by the fire as friends went in the house, figuring I could get them come outside despite the rain if I didn’t go inside.

After five minutes I caved. I wanted to see my friends. I was still intent on coming back to the fire, where my out-of-town friend (who is originally from the Pacific Northwest, where this kind of rain is normal) monitored the bonfire.

More people arrived, and I saw the shift in weather. Was that white stuff? I swapped my raincoat for another (dry) jacket and went back out, hollering back at my friends to get their hot wine and join us.

There’s something about that switch from rain to snow. I felt a profound sense of relief. Alaska on New Year’s Eve should be dumping snow, and it did. If it could pour snow, it poured just as hard as it had rained. The yard and the trees around the fire slowly turned to white. And the blaze got bigger as people gathered around it and added more wood. It was absolutely beautiful.

There is something in this to be learned about changing perspectives when I can’t change the world, and sticking with my course. Of course, it helps when it snows. I’m glad I got to ring in the new year with a sense of joy as fleeting and magical as snow and a big fire.