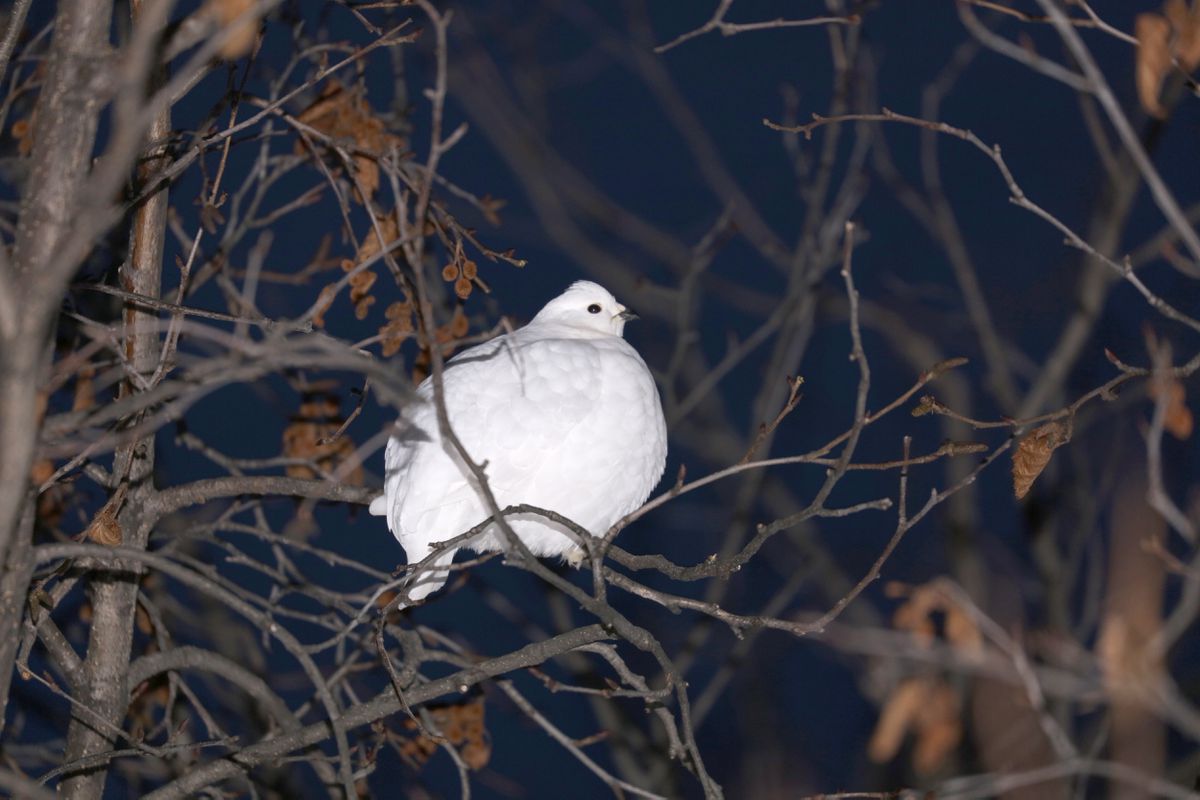 A whitetail ptarmigan photographed this month at night. (Photo by Steve Meyer)

A whitetail ptarmigan photographed this month at night. (Photo by Steve Meyer)

The light from the yet-to-appear moon above the eastern horizon illuminated the mountain slopes blanketed in white, and the clear, cold air sparkled with microns of frost that seemed to hang from invisible wires.

The Alaska winter nights never quite get dark, and allow one to observe the landscape and its inhabitants when the sun leaves early.

Sitting in the powdered snow, my back to one of the sporadic clumps of scrub willow, I pondered the twisted branches that defy the harsh environment of northern elevation and provide sustenance to the mountain’s toughest inhabitants — the whitetail ptarmigan, my reason for being on the mountain.

Even though I was swaddled in a heavy down parka, insulated bib overalls, bunny boots and mittens, it wasn’t long before the minus-18 temperatures began to penetrate my core and I wouldn’t be able to sit much longer.

Finding this diminutive bird is rarely easy, thanks to their steadfast refusal to break the spirit of their bloodline, which keeps them above tree-line their entire life. While Dall sheep move down the mountain in winter, whitetails are left to fend for themselves against the ermine and wolverines that rely on them for protein.

Thus, picking a spot to wait and hope some would choose that same place to feed and tuck in for the night was wishful thinking at best, and maybe shading the dark recesses of insanity, at worst. It wasn’t the first time for me, although it was the coldest by about 25 degrees, and none of my other attempts to observe nighttime whitetail behavior had been successful.

That’s the thing about love affairs. Reason has no seat at the table. Wanting to understand the life of whitetails had become part of a relationship developed over many years.

The movement of their wings caught my eye as three birds came down the mountain and flared out above the deep blue of the dark horizon. Funny how discomfort vanishes with the adrenaline rush of profound satisfaction. My focus shifted to one bird so as not to lose them all when they dropped back into the white background of the mountain.

Flying within 15 yards or so of me, the whitetail did a couple of pirouettes (reminiscent of teal settling on the water) and plopped into the powdered snow. It disappeared, and then in a moment a head appeared, the tiny black beak and dark eye the only separation from the stark white of the environment.

In a moment the bird climbed out of the snow hole and was joined by the other two, all marching atop the impossible softness of the white powder toward me. That’s when my mind flitted to moose poop.

Perhaps eight or nine years ago, while I was serving on a Fish & Game advisory committee, we had a guest speaker at one of our meetings. The graduate student spoke of an impending study of moose poop. There were scientific terms used for it, but in a nutshell, someone had determined that when moose were stressed, they produced a chemical that could be detected in the oblong pellets issued in defecation.

The impetus was determining if human activity around moose produced undue stress, with the focus on snowmachines. You can imagine how an audience of outdoors folks who had spent most of their lives around moose and snowmachines would react. To most present it seemed the driving force behind the study was to show how bad snowmachines were, and this was a way to take away some of the backcountry enjoined by many Alaskans who ride them for winter recreation.

I don’t know if that was the case, but the meeting was colorful with comments. The one I remember was someone suggesting that instead of all the laboratory work required to analyze the poop, they could probably just develop a taste test.

In the end I felt a bit sorry for the student. If there is an ungulate more accommodating to human behavior than moose, I don’t know what it is. Whether they are strolling down a busy street in Anchorage or sleeping next to the firing line on a rifle range, they remind me of your typical milk cow.

Moose stress seems the most marked, as with other wildlife, in the dead of winter, when their bellies are growling and deep snow restricts their quest for food. Except for when defending their young, winter is the time when moose often lose their patience and become aggravated with either unknowing or uncaring folks who approach too close, or stay in their space to long. For the most part, people who spend a lot of times in the backcountry snowmachining, skiing or snowshoeing understand that and take care to avoid causing more stress.

It might seem odd that hunters in particular want the animals that provide sustenance, and the deep connection to the outdoors that we share, to have the best life they can. I’m willing to bet the more than 90% of the human population that eats meat would prefer that their meat came from an animal that led a good life.

So when the whitetails started marching straight to where I sat, I had a bit of a moment. My intent was not to disturb them, just to observe them. If they walked into my lap, there was no chance to avoid them being startled and stressed. I started humming and talking in a low voice. The trio stopped, lifted their heads and I moved a bit so they would see me.

Undaunted, they kept coming. Evidently I was sitting near a ptarmigan buffet, and they were close enough to grab as they fed around me.

I had my camera and a flash with a diffuser, and I confess, I really wanted a night shot. After a bit it seemed we were all buddies, and as they fed I felt I had their permission so I did a test sweep to the side with my flashlight, and then a test flash to the side. No reaction. When one climbed onto a branch and seemed to pose, I took an image.

Many years ago while discussing how to relate to people I was told that “approach determines response.” The notion has held up, and it seems the same is true of wildlife.

Steve Meyer is a longtime Alaska and avid shooter who lives in Kenai.