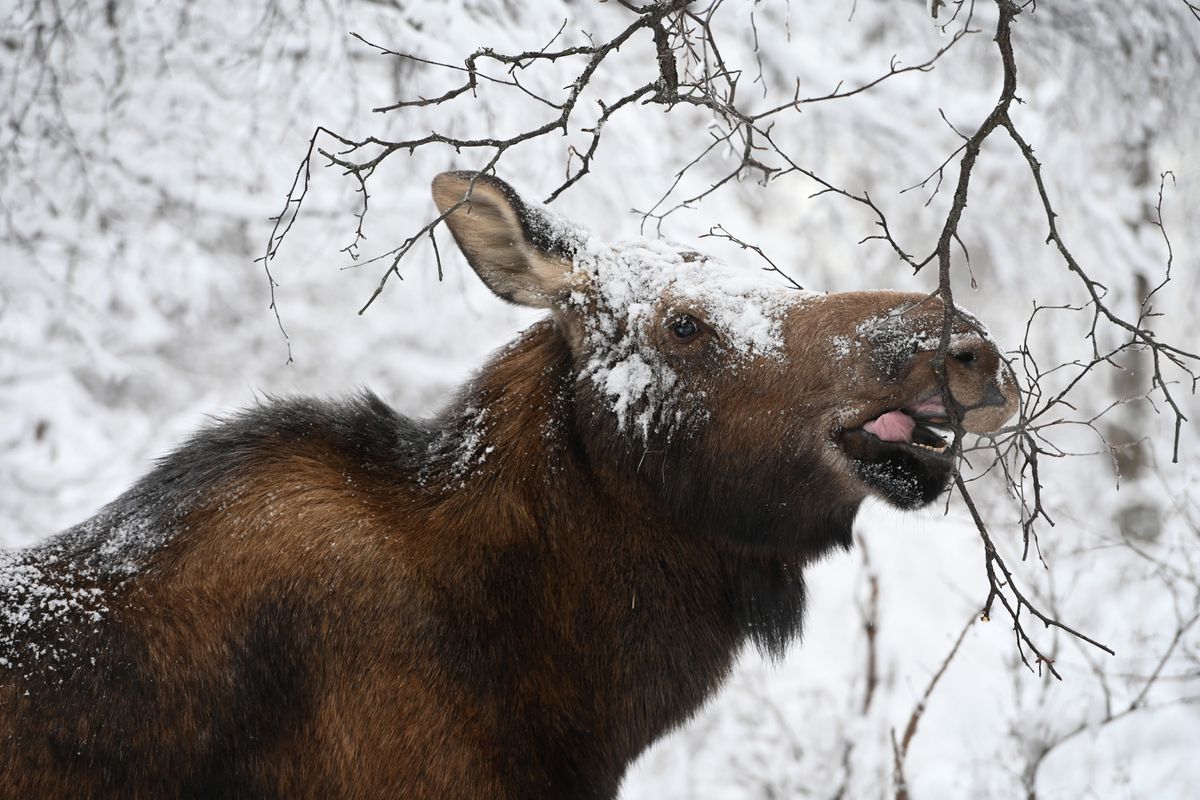 Moose are the favorite winter animal in Alaska. Every winter visitor has moose at the top of their must-see list. For locals, seeing a moose brightens the day.

Yes, we love them, but how are they doing this winter? The winter of 2019-20 has been tougher than the past few, so how does that affect our moose population?

That depends on where the moose are located. Moose do quite well when snow depths are less than 20 inches. Things get tougher after that. Snow cover of more than 30 inches significantly affects the ability of moose to survive the winter.

Moose are ideally adapted to handle Alaska winters. The size of their bodies relative to their surface area helps them conserve heat. However, an animal that can weigh upwards of 1,000 pounds needs a lot of food to maintain that body heat. When the snow is deep, moose move as little as possible to conserve energy.

Winter browse has a lower energy content than food sources available during summer. Thus moose must move a fair amount to obtain sufficient calories to survive. During months of deep snow and cold temperatures they burn more energy than they take in, and they can lose up to 25% of their body weight during the winter. No wonder they look bony in May.

Moose in the Delta Junction area and the Tanana Flats, though faced with heavier snow than has been the usual, are doing quite well. The low temperatures are not a big factor for moose. They have an insulating coat of hollow hairs that keeps them warm. Their large nose has extensive passage ways which warm incoming air before it hits the lungs.

Browse is plentiful along numerous glacial streams in the Tanana Flats. Felt leaf willow is a favorite food with a protein content of nearly 7%. The fields near Delta Junction provide various types of grasses that can be utilized by moose. Dwarf birch, which grows plentifully in the burned areas south of Delta, is also used heavily by moose despite its lower protein content.

Farther south, on both sides of the Alaska Range, things are not quite as rosy for moose.

Snow depth from Black Rapids to the Alphabet Hills — south and west of Paxson — is extreme. There are moose in the Rainbow Mountain area that will not make it through the winter. They are trapped in small willow patches with insufficient feed. I am aware of several that have died already and there are more on the verge. They have no way out, even if they had the energy to do so.

Earlier in the season many moose moved north and south to escape deepening snow. Some of these movements are normal fall occurrences. This season a number of moose moved into Donnelly Flats from the uplands around Black Rapids. It has been common to count 40 moose on the Flats on a given day this winter.

The Denali Highway looks bleak. There are a few moose trapped in the Maclaren Valley that will likely have a tough go of it. The few sets of cows and calves stuck in creek bottoms may do OK provided there is enough overflow on the creek to provide easy footing.

Losing moose during harsh winters is a normal part of nature. There is little man can do about it except deal with the after-effects. We can study browse quality and habits all we like, but we will still be unable to change the natural mortality caused by nature. The only aspect we can change is how many moose might be available for harvest by the hunting public.

There are several areas in the Upper Copper Basin that were hydro-axed to stimulate willow growth for better moose browse, which is one of those things that seemed like a good idea at the time. Then comes the snows of 2020. Will the moose that stay because of the increased forage now have increased die-off? This gives us food for thought, doesn’t it?

John Schandelmeier is a lifelong Alaskan who lives near Paxson with his family. He is a Bristol Bay commercial fisherman and two-time winner of the Yukon Quest International Sled Dog Race.