Bird dogs and raptors seem to share an ancient connection 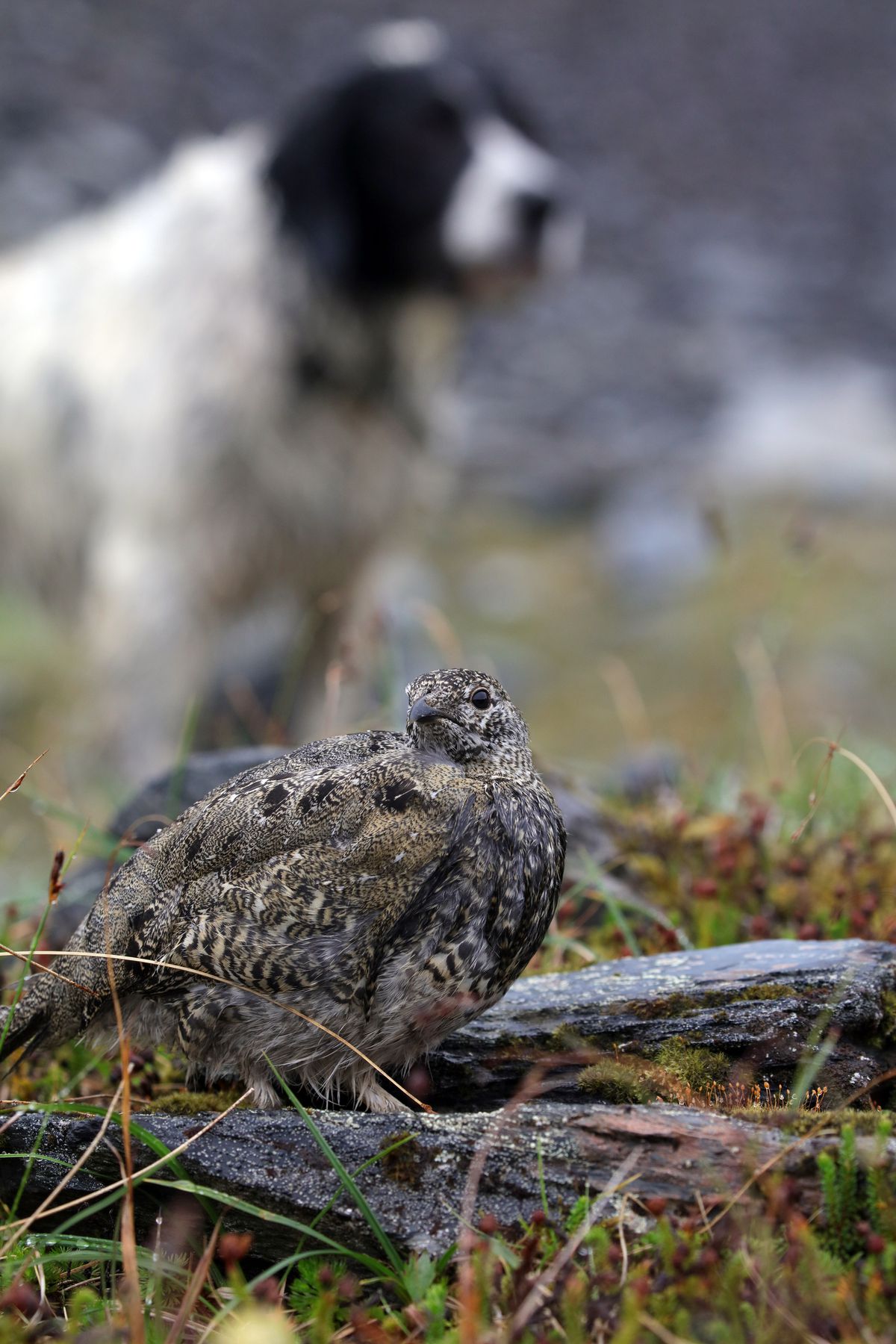 Raptors are the main reason ptarmigan use their camouflage and hold tight instead of flying away. Photo taken in August 2017. (Photo by Steve Meyer)

Raptors are the main reason ptarmigan use their camouflage and hold tight instead of flying away. Photo taken in August 2017. (Photo by Steve Meyer)

Winchester and I were working our way through a mile-long stretch of forest of spruce, birch, cottonwood and intermittent patches of alder, hunting grouse. It was early November, a light skiff of snow covered the forest floor and it would be the last grouse hunt of the year.

Winchester was young and was not the masterful bird hunter he became, and he was pointing snowshoe hares. This instance came at a time when the hares were in an upcycle, and it seemed instead of grouse we had hit the hare jackpot.

Winchester would go on point, I would start in for a flush, and a hare would squirt out of the brush. I wasn’t attempting to shoot the hares and would tell Winchester, “no bird,” teaching him that rabbits were not what we were after.

We came to a clearing that held a small clump of immature spruce and heavy underbrush. Winchester went on point just outside the clump. I heard the rustle of wings and was mounting the shotgun when a Northern goshawk burst out of the cover. The brawny bird flew to a nearby limb of cottonwood and perched, watching us.

This behavior is not typical. Goshawks tend not to be human-friendly and will put more distance between themselves and you when encountered.

Winchester was still on point, intent on the center of the brush ahead of him. I whispered to him, “find the birds,” what I’ll tell him if the prey is holding tight and I cannot locate it.

He charged into the brush and stopped like a statue. When I approached his position, I heard a whimpering-like sound. On the ground, just off the end of his nose, was a snowshoe hare.

The rabbit’s fur was torn, clumps hanging off its back, the goshawk’s meal interrupted by our presence. For a second, I had doubts about what to do. I didn’t want to leave the rabbit to suffer, not knowing if the hawk would come back. It was still sitting on the branch. But goshawks kill what they eat, and I wondered if I killed the rabbit if the bird would consider it his.

I dispatched the rabbit and sent Winchester off to continue his hunting and walked to the far end of the clearing to watch the hawk. If he didn’t go to the rabbit, I would pick it up, and we would have it for supper. After a bit, the hawk swooped into the brush and, as far as I know, had a good meal.

With the upcycle of hares there had been an upcycle of raptors — a common occurrence in cyclic prey populations. Winchester and I had a nearly identical experience with a goshawk near our home the next summer. On that occasion, I saw the hawk make his stoop, and when it didn’t come back up I figured he had made a kill and left him alone. A later look confirmed the kill, another snowshoe hare.

These experiences got me to thinking about Winchester’s bloodlines and falconry, and that maybe the idea of using setters for falconry came from the birds instead of humans.

An abbreviated version of English setter history starts in the 1400s, when setting spaniels were used by hunters to “set” birds, holding them in place while the hunter got positioned with a net to intercept the flushing birds.

The English setter evolved out of those beginnings for this purpose. Setters of those days, when they “pointed” birds, did so with a low-to-the-ground, tail-straight-back profile, much like a cat during a slow stalk. Modern-day setters were trained to point upright, tails high, so they are easy to spot, mostly for field trial purposes, it seems.

On rare occasions, Winchester’s ancient bloodline will surface, and he will point in this manner. There is no more beautiful sight in the hunting dog world, and it is one of those things I desperately want to capture in a photograph before both of us go to pasture.

It wasn’t long before falconers realized the advantage of a dog finding and holding birds, at which point they sent the raptor up to circle. The bird is flushed, and the predatory bird stoops in for the kill.

This too is a sight to behold. Perhaps many of you remember when Randy Johnson, the professional baseball pitcher, hit an unfortunate mourning dove that flew into one of Johnson’s 100 mph fastballs. It was captured on film, a tremendous explosion of feathers.

We had pigeons for a time, the intent to use them for training our bird dogs. In the end, we couldn’t bring ourselves to raise birds to kill for that purpose. But we kept them and had about 35 coming and going to the coop we provided. After a time, a goshawk came around and started picking them off. One day a pigeon flew past the driveway just as the big hawk struck the smaller bird. The explosion looked just like the dove struck by the fastball.

Since the early experiences with Winchester and goshawks, it has happened too many times to be a coincidence. It always happens with Winchester, never the other setters, and it was always just him and me until opening day a couple of years ago.

Winchester, Christine and I were hunting ptarmigan in the high country when Winchester pointed several whitetail ptarmigan. We were able to see they were juvenile birds and flushed them without shooting to acknowledge Winchester’s work.

A second or two after the flush, as we watched the birds fly up the mountain, a goshawk came out of nowhere and snatched one of them in his talons. We felt a bit bad about the young bird, but Christine was able to witness what I had talked about for years.

I imagine it will sound silly to some, but I believe Winchester has an ancient connection to these raptors. Maybe their bloodline spirits crossed, perhaps hundreds of years ago across a highland moor, their prey the red grouse. I like to think I have a bit of it too.