If we had to hunt to survive, how long would our stocks of fish and game last? 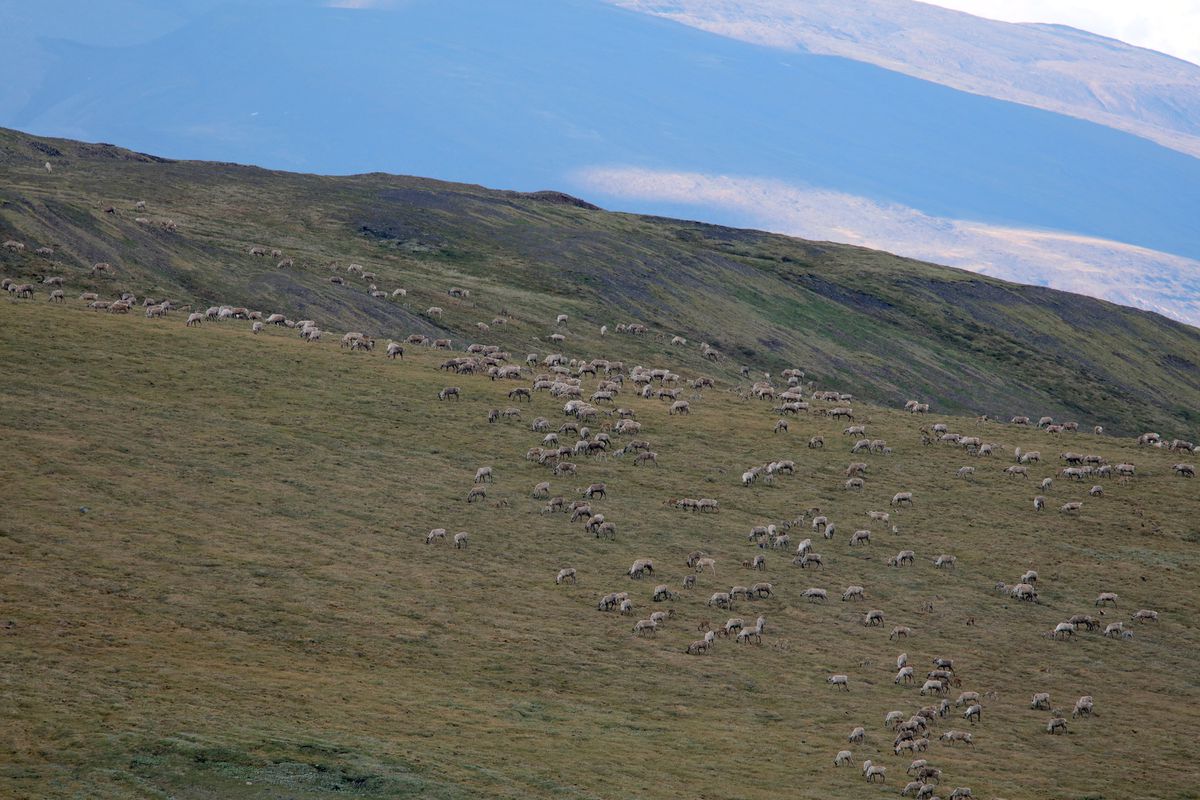 The perception of abundance must be measured against circumstances. Porcupine caribou herd in the Brooks Range in June 2017. (Photo by Steve Meyer)

The perception of abundance must be measured against circumstances. Porcupine caribou herd in the Brooks Range in June 2017. (Photo by Steve Meyer)

It was a late summer day during a respite from the rains. I was out in my yard performing one of the numerous vile tasks one must do to conform to acceptable standards of subdivision life. Probably mowing the lawn or weeding a flower bed.

The neighbor came out of his house and marched across the street toward me, clearly with something on his mind.

This neighbor had a nice family with a stair-step passel of children of an indeterminate number. We didn’t socialize other than to wave or say hi. His wife babysat our children from time to time when they were small, and that interaction evidenced that the family was wholesome and quite mild in their mannerisms.

The neighbor approached to conversation distance, and he said, without preamble, “I know you are a hunter, and I see you coming home with game all the time, and you seem to take guns everywhere you go.”

He had my attention, but I couldn’t figure out where he was going.

He continued, “I don’t hunt, and I don’t have guns, but we do eat meat. We have a large cache of dry foodstuff that will hold us over for a long time if something happens and Alaska is cut off from the rest of the country.”

This was many years ago when I guess we still thought the Russians were coming and a nuclear exchange of some sort seemed possible, if not likely. I didn’t think about it that much, except to figure that, if vaporized, my demand for caloric intake would become nil.

“So,” he said, “I was thinking that since you are a successful hunter, and if something did happen and you were willing to share your meat, we could share our dry food, you know, help each other out.”

I didn’t have much in the way of filters back then and possessed what some might consider an awful sense of humor. I replied, “Has it occurred to you that since I do have guns, and you do not, that I will just take your food and keep my meat?”

As soon as I said it, I was sorry I had. The look on my neighbor’s face as he backed away showed he did not think I was joking.

A few days ago, I was in a local store picking up eggs for the Labs and setters, and there were no eggs. Looking around the store, I discovered there were a lot of bare shelves, and that’s what sent me back to the exchange with the neighbor many years ago.

In those early days I was naïve enough to believe that if Alaska was cut off from the world, there was plenty of fish and game to sustain us through such an event.

In my early days in Alaska, the human population was about half of what it is today. In retrospect, my thoughts were skewed with the romantic ideal of hunting to survive. Obviously, it is possible, but it is not sustainable when the human population exceeds the carrying capacity of the land — a reality I was not so much aware of in my younger days.

Whenever there is national strife in the wind, I hear folks talk of how we Alaskans don’t need the rest of the nation to survive. Some believe that our fish and game resources, along with our other natural resources, would sustain us indefinitely.

Maybe for a few weeks. The decimation of fish and game populations would be rapid, the aftermath catastrophic for the future of wildlife.

The perception that Alaska game populations are enormous is understandable. Photos depicting Alaska wildlife are prolific and perpetuate the myth that subsisting from wildlife is possible for everyone.

Think about it. Hunting regulations are set to allow harvest at the highest level possible, while still sustaining game populations. If a free-for-all occurred during an emergency, those populations would be rapidly reduced. A subsistence level of harvest would not be sustainable for more than a small percentage of the current human population.

In the early days of Alaska’s development, mining crews, road and railroad crews, and construction workers had few options for meat. Supplies from the Lower 48 were sporadic, and game was harvested to feed these folks at an alarming rate. If it was meat, it got shot. When supply routes became normalized, it took many years for game to rebound in these areas.

Early Alaska was sort of a microcosm to the early days of settlement in the Lower 48 when game was hunted to feed a growing population. The population grew to around 38 million by 1870 and game populations had been severely decimated; in many cases, hunted to extinction or near extinction.

Whenever times like the current situation arise, it seems to prompt serious thought. It is undeniable that for us humans to survive, we must kill other living things. What I wonder most is, at what point will we run out of things to kill?

It seems like some bug that we can’t see, that is struggling to survive at our expense, isn’t driving the ship. It seems more like the ever-growing and ever-demanding human biomass will write the chapters of the future.

So, I stopped my neighbor and apologized for my comment and thanked him for sharing his thoughts. I told him that, of course, I would share with him if it came to that.

It never did, but it is a reminder that we are all sort of in this thing we call life together, and that while one way or another no one is getting out of it alive, we can make the best of it while we are here.

On the upside, Christine and I were doing a presentation last week. When we arrived at the facility for the event, they gave us gift bags with odds and ends inside. I didn’t look at the contents until later, when I found a small bottle of hand sanitizer. I’m fairly certain I can trade it for an original Model 1886 Winchester chambered for .45/90.