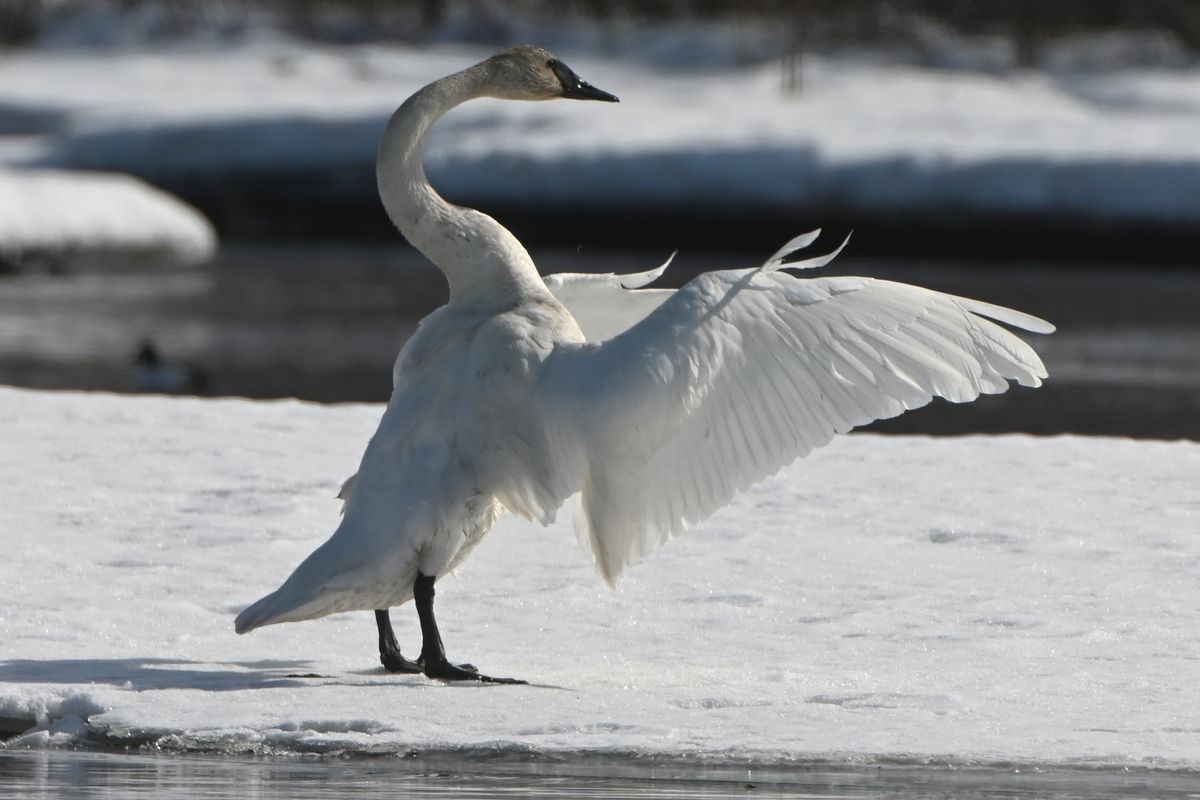 A trumpeter swan flaps its wings while preening after feeding at Westchester Lagoon on Wednesday. (Bill Roth / ADN)

A trumpeter swan flaps its wings while preening after feeding at Westchester Lagoon on Wednesday. (Bill Roth / ADN)

Spring officially arrived in Alaska three weeks ago but it doesn’t really seem much like spring in Paxson. Or Delta Junction. Or Fairbanks.

There is a lot of snow and it is still coming down without melting. Paxson temperatures were in the minus range last Monday.

But --- the snow buntings arrived on schedule in mid-March. The trumpeter swans showed at Paxson Lake on Tuesday and a few geese and four swans touched down at Clearwater Lake in Delta Junction on Wednesday.

They are here, but there isn’t much for them to eat. A slate junco picked at grass seeds by my driveway where it was melted out.

Snow buntings, which usually stop to pick seeds along the highway edges and quickly continue on their way north, have stalled out along Interior highways, waiting for a thaw. We have 20 or so hanging out at our horse corral. They have been here for almost two weeks, living on oats.

Buntings nest way up in the high Arctic. They nest in rock crevices. The males show up three or four weeks ahead of females to get one of the limited nesting spots. Given the plethora of snow everywhere in Alaska, coupled with the late thaw, one can imagine that most of the rocks are still well covered up north.

Horned owls are at their nest sites. Birds that used to nest near our house in Paxson would be setting on eggs by April 10. The uptick in the hare population has brought a corresponding rise in the owl population, but despite the availability of easy meals, the owls are holding off egg laying. Warmer days are forecast for the coming week, which may trigger nesting.

It appears that varying hares have passed their population peak. Owls usually lag one year behind their peak, and nesting is timed so the young owls are out of the nest shortly before the first baby hares are out and about. The young birds can learn to hunt on easy targets, although their targets will be fewer this spring. Tracks in the woods indicate a 75% drop in hare numbers.

Swans in the upper Copper River Basin may not have a successful nesting season. Late snow delays nesting. Eggs take 32 to 33 days to hatch, and cygnets are not fully capable in the air until they are almost four months old. Nesting areas along the Denali Highway won’t be clear of snow until early June. The older birds seem to understand the timeline needed for their young to fledge and forgo breeding in late spring years.

Birds are not going to be the only wildlife affected by all of this April snow. I came up on a moose trotting down the Richardson Highway just north of Hogan Hill at Milepost 159. The young bull was in poor shape and didn’t want to leave the pavement. I eased up along side of him, not wanting him to travel farther north where the snow was even deeper. As I passed, he jumped out of the roadway into the berm. He was immediately high-centered, unable to move in the deep, packed snow.

I stopped and walked toward him, causing him to struggle onto the highway and head back to the south. I watched him walk off and could only wish him luck; he will need that and a quick thaw if he is to see another spring.

A normal spring would soon have the Nelchina caribou migrating west across the Richardson Highway near Sourdough as they head toward the Talkeetna Mountains and the calving areas. But deep snow delays migration. Calves are sometimes dropped while the cows are still moving, because gestation doesn’t wait. Calves born on the move have a very poor chance of survival. They must contend with swollen rivers and creeks in addition to heavy, wet snow.

Our Interior birds and mammals have had an easy decade. This season could set them back a bit. Nature is fickle. All of our scheming and management ideas go for naught when nature intervenes. Just when we think we have it all figured out, along comes an unforeseen environmental condition and sticks a fork in it.