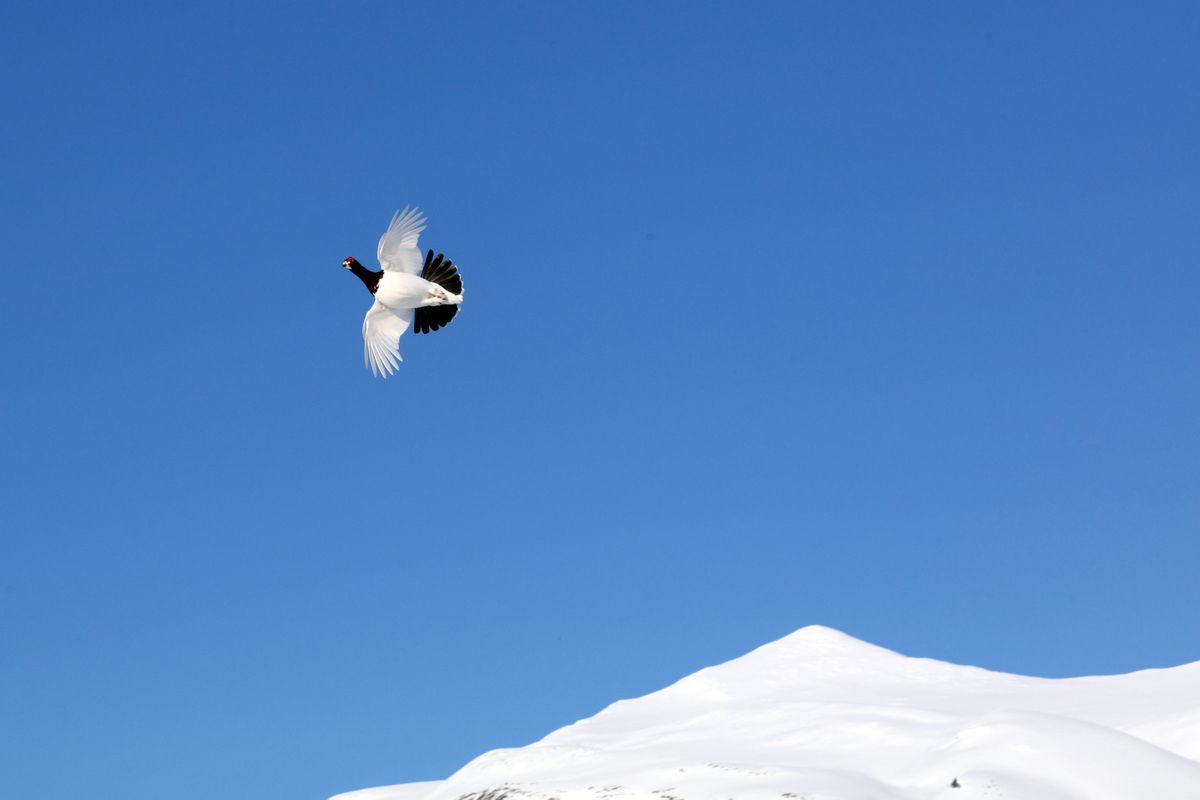 A male willow ptarmigan wheels in the air in the Kenai Mountains in May 2019. (Photo by Steve Meyer)

A male willow ptarmigan wheels in the air in the Kenai Mountains in May 2019. (Photo by Steve Meyer)

The ruckus coming from behind me, down the mountain slope, was unintelligible except for a few words too explicit for public consumption.

Looking over my shoulder, the cause became quite apparent. My progress in the soft, water-soaked snow had drowned out other sounds, and I hadn’t realized Christine had fallen back.

She was struggling mightily to extract a snowshoe-clad foot from a thigh-deep hole that had left her high-centered.

Suppressing my urge to laugh out loud, I slogged my way back down.

“You said this would be fun,” she said, in a rather accusing tone.

“Well,” I replied, “It’s possible that in my excitement I neglected to say the fun would be type B.”

“What’s that supposed to mean?”

“Well, you have to work hard and be miserable, and then when you are back home, the sore muscles make you feel like you accomplished something, and you are glad you did it.”

“Oh, like the first time you took me duck hunting.”

“Yep. With type-B fun, the short-term memory gets short-circuited because you seem to forget the misery when it’s time to do it again. Sort of like some hunting trips.”

That was some five or six years ago during our first time doing ptarmigan surveys for the Alaska Department of Fish and Game. We didn’t have to get home before the misery of the tough climb into the high country was forgotten.

Ptarmigan surveys are conducted from late April until late May when the breeding season is in full swing.

The process of surveying these birds is rather simple. An electronic predator caller, loaded with the sounds of male willow and rock ptarmigan breeding calls, is set up at a predetermined location. The surveyor plays the call and records any bird responses in a journal. The volunteers who conduct the surveys have assigned routes with GPS coordinates for each call location.

When Rick Merizon, the small-game biologist who works out of the Palmer office, oriented us to the survey work, he told us about the aggression these birds would display when coming to the calls. I was skeptical. How tough can a bird that weighs about a pound soaking wet be?

It turns out that male ptarmigan aren’t much different than males of every other species. Threaten to take their mates and they become quite aggressive in defense.

We post-holed our way to the first GPS coordinate and tucked into the edge of a clump of low willow brush and fired off the caller. Within seconds there was a responding call that sounded exactly like what the caller was blaring out. Christine and I looked at each other with that delighted look you get when you don’t really believe something will happen, and it does.

In the next few moments, while we were grinning at each other like village idiots, a whoosh of air blasted inches over our heads and a male willow ptarmigan spiraled into the snow field a few yards in front of us. It was pre-dawn, and the light dimmed his beautiful white body and chestnut breast.

But when he fanned out his tail feathers and strutted towards the caller sitting between us, his head held high while squawking his call, his message was clear.

Moments later, another male dropped into the snow field and displayed his wares. The first male turned to the intruder and they advanced at each other. Certain they would fight, we watched and wished the light was good enough to make a photo. They got close and circled each other, like boys on a playground getting ready to fight for the honor of some girl who probably didn’t like either one of them.

The fight never happened. We shut the caller off and waited as they threatened each other, and then in an instant the first bird flew off, followed momentarily by the second.

Christine was practically giddy over the display and said, “This doesn’t qualify as type-B fun, I know what is coming on the return trip, and I’m already looking forward to coming back.”

We couldn’t know it at the time, but our first year of surveys was remarkable. For the work to have meaning, each station on each route must be surveyed at least twice — more if possible. We were made four trips. There were lots of birds at most of the calling locations and we got to where we could even identify a couple of the males as individuals by their peculiar behaviors.

We’ve participated every year since, and the action has varied, which is, of course, the point of doing it. Identifying trends in breeding populations for specific areas gives biologists hard data to make management decisions. Before conclusions are made, the surveys must be completed for at least five years in a row.

Since starting this work, we try to get an early start each spring, even before the official time window of the survey specifies, which is why we conducted one over the past weekend.

It was the least active survey we’ve ever conducted. We saw male ptarmigan, but they were not responding to the calls either with displays or vocal responses.

One sample doesn’t prove anything, and we speculated about what might be different. Perhaps since this winter was the first “normal” one we’ve had since starting this work, what we’ve seen in the past may not apply.

Time will tell, but the reward is getting to know these birds and feeling a deeper connection with them and their environment. It’s one thing to catch glimpses of wildlife as we go about our business; it’s entirely another thing to be able to observe them and get to know them where they live.

Our weekend survey was tough. Snow conditions were good early but deteriorated as the temperature rose, making the travel much tougher. The expected action from the birds never materialized. When we finished the survey, we sprawled out on a snow-field, the diamond-bright sun shining above the peaks to the east, penetrating the ice crystals and warming our faces.

Lying back in the snow with her eyes closed, Christine said, “It doesn’t matter that the birds snubbed us; we still get our moment in the sun.”