Be like Hugo, the adventurous bird dog: Don’t worry, and be happy 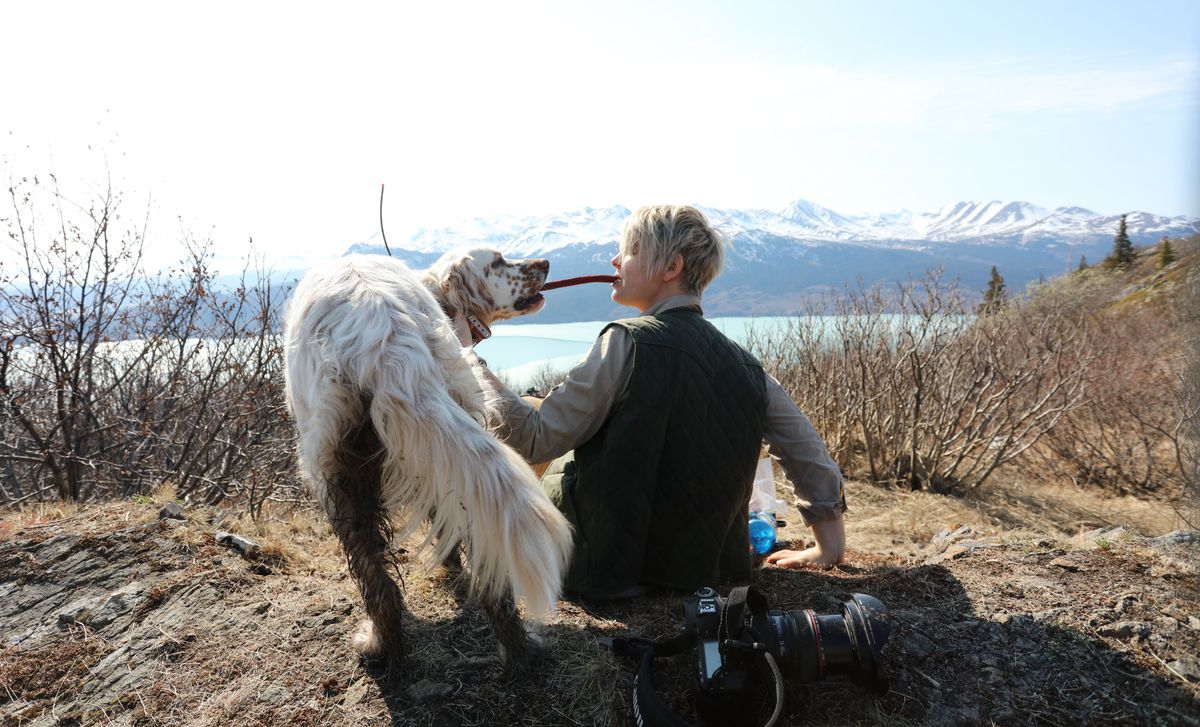 Hugo and Christine Cunningham share a pepperoni stick as they take a break along the Skilak Lookout Trail on the Kenai National Wildlife Refuge. (Photo by Steve Meyer)

Hugo and Christine Cunningham share a pepperoni stick as they take a break along the Skilak Lookout Trail on the Kenai National Wildlife Refuge. (Photo by Steve Meyer)

The first week of May, I took a day off from the office midweek to enjoy the outdoors. If talking to friends or coworkers, I might have used the words “mental health day” to describe it.

But when your partner in life is a cowboy-hat-wearing old duck hunter and co-parent of a houseful of hunting dogs, you’re better off translating words used in therapy settings for those more suited to the outdoors.

“I just want to go to the mountains with one of the dogs,” I said.

Secretly, the night before, I had promised Hugo I was taking him, which I’m sure he understood.

Hugo was as pent up in the yard as I had been at the office. His desire to hunt birds knows no season — he runs a marathon in the mountains in search of a thing with feathers. Daily walks are not enough to vent his thrill for adventure.

I didn’t have to say much for him to understand my intention to take him in the morning. Dogs listen to the non-verbal content of human communication better than humans. They are not thinking of what to say next.

I’d wait until the next morning to figure out how to tell Steve that Hugo and I made a secret pact.

Adding to the burden of how to break the news was the fact that Hugo, as an avid bird-hunting dog, is the highest-maintenance member of the family.

He does not trot beside you on the trail of life. He is out ahead, searching the area, sniffing the air, launching through melted snow puddles and mud, and then running back to you in fist-pumps of joy. Your nerves are likely to be shot from calling him back and worrying about what he’s doing just out of visual range.

If you like clean clothes and upholstery, Hugo is not the dog you choose to take on a spring walk.

The seven dwarfs almost make a good comparison to the eight hunting dogs that share our home — they also had their house cleaned for them by a lovely young gal. Hugo would be the long-lost eighth dwarf who never made it into the Disney film. He is the misbehaving dog that didn’t go to the mine to work but ran off to a life of adventure.

Deep down, I knew that if Steve were going to pick a dog to take on a nice hike, it was going to be one that resembled Dopey, Grumpy, Happy, Bashful, Sneezy, Sleepy, or Doc.

That next morning, Steve asked me which of the dogs I wanted to take with us. It seemed obvious that we were talking about a specific dog. To keep the peace, I could suggest Cogswell or Boss, for instance, and we could expect a pleasant hike with a sweet dog to dash ahead of us and back. Much like taking a behaved child to a restaurant.

“Is there a dog that you would not prefer to take?” I asked. I attempted not to glance toward Hugo, who sat tall with his tail sweeping the floor while the other dogs lounged about, unaware.

Steve shook his head. “It’s your day off; you can pick the dog.”

Instead of confessing Hugo and I had already brokered a deal the night before or acknowledging the fact that he is the most troublesome dog in the family, I pretended to have to think about who to pick.

Every other dog in the house was laying inert except Hugo, grinning at my feet.

Steve didn’t need to tell me that his absence of objection was not an approval of my pick.

Living and hunting with a houseful of bird dogs has tested my limits at times. Those of us who own gun dogs work hard to train our canine partners to point, flush and retrieve, but dogs have taught me more than I’ve taught them, and this day was no different.

Part of the reason I needed to take time off was because of anxiety. The news of the day is ever-present, and it’s difficult not to tune in to the latest updates — they have such a significant impact on all of our lives.

I’d gone on several weekend hikes without the dogs because Steve and I were doing ptarmigan surveys, and dogs are not allowed. It was nice to get outside, but my mental monologue never turned off.

Even on the mountain, for the first time in my life I pulled out my cellphone to see if I had reception to check the news. At one point, I laid on a snowfield, and I thought, “It’s so nice to get away and listen to the birds and the snow melt.”

But, that’s not getting away. That’s just taking a break, and you know you have to get back to it in short order.

To really get away from it all, I needed what happened next. And that was for Hugo to take over as the center of attention. I needed him to run off after a rabbit first thing while I blew the whistle, and Steve rolled his eyes.

For five hours of hiking, Hugo was the absolute worst dog possible. I focused on reining him in for Steve’s sake even as I marveled at his joy in discovering everything from songbirds to mountain snipe. It wasn’t until we turned the radio on in the truck and I heard the word “coronavirus” that I realized, gratefully, I had forgotten about it for the first time in two months.

Some people might say you need to work on that dog more. Good hunting dogs are reliable and worthy of trust, and there’s nothing that can ruin a day easier than a poor performing bird dog.

But, I’m happy with this spirited little dog that knows what kind of dog I need him to be. And, I’d jump to his defense and say, when we are hunting, he is a much more serious dog. He knows, after five seasons in the field, what it means when I have a shotgun. Hunting is serious, and he knew we weren’t hunting.

I don’t have a way of proving that there are two different sides to Hugo, just as I am different at work than at play. I’m also far better at learning from dogs than training them. Steve might agree.

One of the greatest gifts of living and hunting with dogs is the way they connect us to the natural world. They find us birds, but we also find ourselves caught up in an ability to see the world their way. They are living in the moment and observing life without human worry, regret or fear.

They don’t live nearly long enough, but if we’re lucky, we find a way to live each of life’s moments as fully as they do.