With calves about to drop, Nelchina caribou are moving late and through deep snow 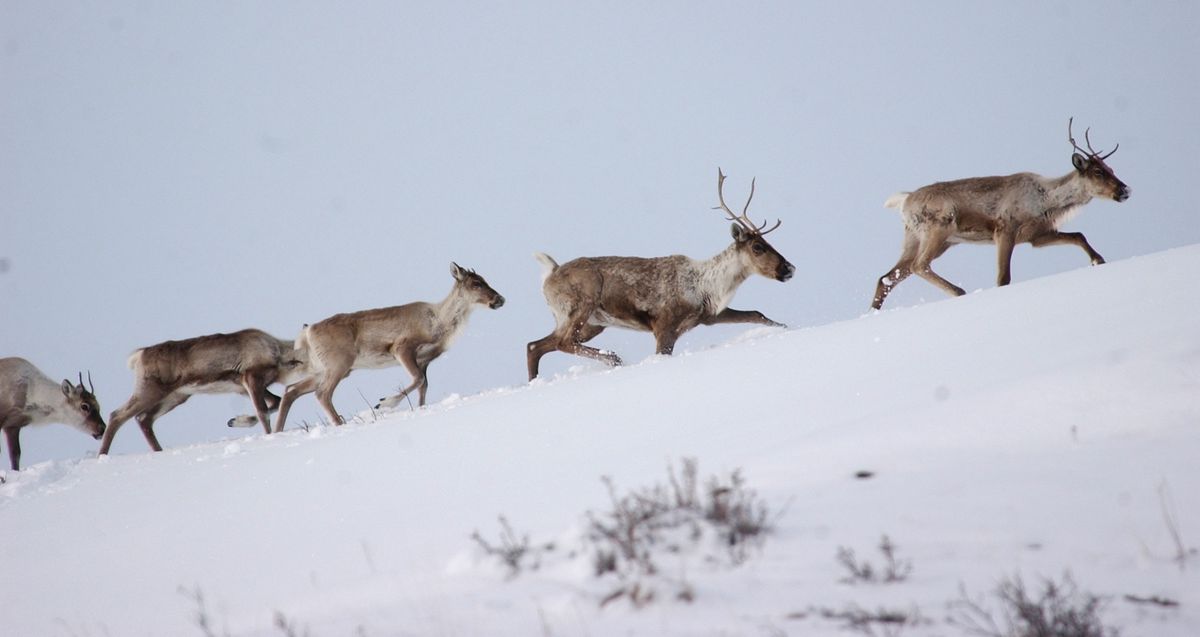 A small group of caribou moves along a ridge in the mountains near Paxson in April 2006. (Bob Hallinen / ADN archive)

A small group of caribou moves along a ridge in the mountains near Paxson in April 2006. (Bob Hallinen / ADN archive)

The Nelchina caribou herd is moving. Years back, this spring movement to the calving grounds would have triggered the Ahtna and Dena’ina to head for the migration routes to intercept this reliable, all-important food source.

They are slightly later than normal, but more concerning is the deep snow that still lies heavy on the calving grounds in the foothills of the Talkeetna Mountains.

The caribou are also moving southward of their customary routes. Caribou are creatures of habit. Their spring movements usually follow a predictable pattern. Many of the same trails are used year after year, generation after generation.

Fall migrations are more haphazard. Fall movements are triggered by weather more than by an internal clock. Snow in the high country or a series of hard frosts will move the herd.

The fall movement may pause for the rut, or stop altogether if the weather turns mild and early snow does not materialize. The caribou may move a couple hundred miles or hardly at all, depending on the availability of feed.

The spring migration is different. There is an urgency in the herd to reach the calving grounds. The loosely grouped individual herds are invariably led by an older pregnant cow who has traveled the route many times previously.

The late start means the caribou have to hurry. The route they take may be as unfamiliar as it is difficult.

On the first of May, two groups of cows crossed the Richardson Highway in front of me, midway between the village of Gulkana and the Hub. The second group of about 30 cows crossed the highway south of the Gulkana airport.

The cows are pregnant, and calving won’t wait for the snow to melt. Calves are born from mid-May to early June. The calving grounds habitually used are located above timberline. These areas are generally windblown and have good access to food sources.

More importantly, there are fewer predators in the high country. Wolves and grizzly bear take a good number of caribou calves. Whether wolves alone can account for a decline in a healthy caribou herd is debatable, depending on whose conclusions you wish to believe.

The Nelchina herd population crash of the late 1960s was attributed to predation by Bergerud and Ballard (1988). Van Ballenberghe came up with a completely different hypothesis (1985), using the same data.

Either way, late snowfall during 1964-66 prevented the caribou from reaching the calving grounds and many calves were dropped along the way. The high number of calves eaten by predators may have been doomed anyway.

Caribou calves cannot negotiate heavy snow or successfully cross swollen creeks and rivers. The result is an extremely high mortality rate. However, nothing in nature is that simple. There are many other factors that may come into play. The Alaska Department of Fish and Game wolf control program is another intangible. Fewer wolves should have a positive effect on caribou predation, right?

Maybe. Maybe not. When wolves decrease, the coyote population increases.

The Copper River Basin didn’t have coyotes back in the ’60s. I caught my first coyote at Paxson during the winter of 1974. The next track I saw was four years later. There were family groups howling in my driveway by the mid-1980s. Coyotes are now common in the Tangle Lakes area and the Alphabet Hills.

Wolves eat coyotes. Coyotes eat fox. The fox population is light around Paxson and in the Alphabets.

Coyotes have no problem tackling caribou fawns. How many young caribou fall prey to coyotes is an unknown, but certainly a possibility.

The Nelchina herd is traversing an area also populated by black bears in addition to the usual grizzlies. Black bears have been expanding their range to the north side of the Alphabet Hills. Black bear sightings did not exist on the east end of the Denali Highway back in the 1970s. Within the last five years there have been enough sightings to make them creditable.

The Nelchina caribou herd is healthy. The population seems stable, though there have been some whispers of range degradation. The spring caribou count will be crucial in calculating numbers of animals available to hunters. Rapidly warming temperatures may help somewhat. The snow-pack is substantial, but rotten underneath. The weather forecast for the near future predicts warm days and little or no frost during the night. Caribou are able to modify migration routes to deal with varying conditions.

A few of those old cows have been running this show for 14 or 15 years. With a little luck, they can make this year work out — in spite of Mother Nature.