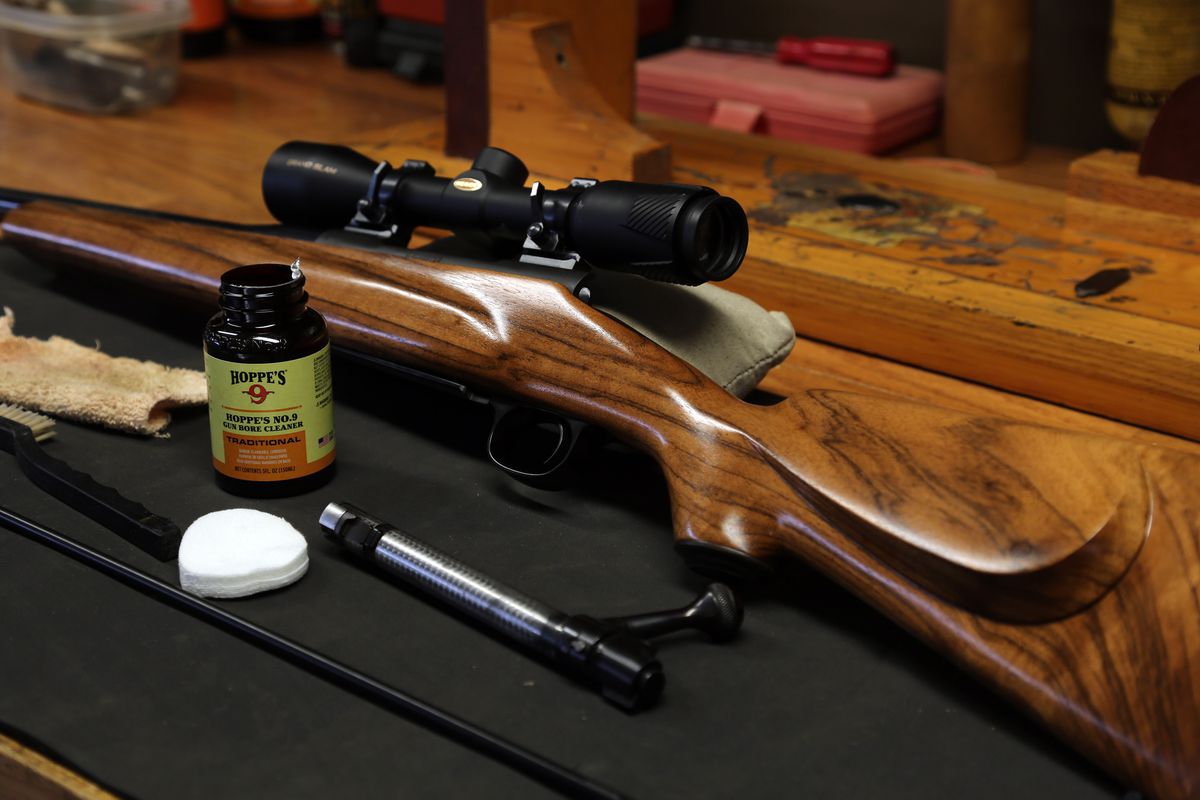 It seems no gun bench is complete without the iconic Hoppe’s No. 9. (Photo by Steve Meyer)

It seems no gun bench is complete without the iconic Hoppe’s No. 9. (Photo by Steve Meyer)

“I can’t stand the smell of that stuff,” said the fellow who walked into my office some years ago.

I had my .45 in parts strewn across my desk, and I was running a solvent-soaked bore brush through the barrel.

“No,” he responded, “not kidding. I can’t stand that smell.” And he turned and left the office.

Questions of character manifest in strange ways at times, and not being swept away to distant times and places at the scent seemed to confirm it. It was my first experience with a guy who not only didn’t like the aroma of Hoppe’s No. 9 Nitro Powder Solvent, but failed to drift off into distant reminiscence when it wafted into his memory banks.

Smell, perhaps more than any other sense, drifts across that part of our cerebellum that harbors pleasant memories. Some seem to have the power of universal appeal.

Who among us doesn’t brighten just a bit when entering a home and the smell of fresh-baked bread is in the air? I’ve heard that realtors will have clients bake bread right before a house showing, the appeal of the aroma so powerful it may influence a purchase. I don’t know if that is true, but it makes sense.

I bet dog breeders wait for that moment when a prospective buyer holds a puppy to their face, and the puppy seals fate with a tiny breath. Would you trust anyone not delighted by the smell of puppy breath?

Horse and saddle leather, wet Labrador retriever and rutting male ungulates are smells that seem never to stop drifting through my mind, just below the surface of consciousness.

The smells of the hunting world connect the spirit of hunters around the globe through shared experiences separated by time and distance. It doesn’t matter if it’s eland ribs cooked over mopane in the Lado Enclave in 1910 or sheep tenderloin over alpine willow in the Wrangell Mountains in 2020. The aroma hangs in the air forever and, at odd times, drifts into the hunter’s memories.

The scent of a freshly spent shot shell absently sniffed takes us right to the grouse woods or the duck marsh.

Not that the new plastic shotshells don’t smell good and evoke the memories, but the old paper shotshells are just a bit better. I have a small collection of paper-hulled shotshells in 12, 16, and 20 gauge. Every fall, when the frost has arrived and the morning air is still, I fire one of them and hold it to my nose, and dream of better days.

The morning I took my first moose was cold and calm, the last heat from the night dissipated into a ground-hugging fog. After the shot, as I walked to the downed animal, the smell of burnt gunpowder hung in the air — a memory that returns on cold mornings on the range when walking through the spent nitro-cellulose cloud to check a target.

Our life experiences are different, the hunter’s path destined by the circumstances that shape our preferences and adventures. The aromas that trigger pleasant feelings from the past are many and varied and not universal, with maybe one exception.

To my best recollection, I was about 4 and Dad was cleaning one of his rifles on a bench in an entryway that doubled as a reloading/gun cleaning space. He was dipping a bore brush in a bottle, and the smells wafting through the air from that bottle sealed a lifetime of connection.

In 1903, Frank August Hoppe, a soldier at the time, developed a gun cleaning solvent composed of nine chemicals. He dubbed it Hoppe’s No. 9. His goal was to create a gun cleaning solution that would ensure the functional reliability of the tools of his trade.

It seems unlikely that Hoppe would envision the success of his creation. He surely would not have guessed that it would posthumously place him in the Sporting Goods Hall of Fame, in 1982. Nor could he have known his original formula would be slightly modified to comply with government regulation.

The original title of Hoppe’s creation was named Hoppe’s Nitro Powder Solvent No. 9. The “nitro” was for the burnt nitro-cellulose the product cleaned from gun bores. That was the label on the bottle contained in the gun-cleaning kit I received for Christmas in 1967.

My memory doesn’t allow precisely how long that bottle lasted, but it wasn’t long. I would lay my .22 rifle and 20-gauge shotgun on my bed and scrub the bores and the actions. In the process the spillage stained the bedding (by that time, my mother had given up thinking anything would steer me off the hunting and shooting path) and left the room with the delicious aroma permanently hanging in the air.

I remember putting the stuff on my neck, like cologne, reasoning that everyone would think I smelled terrific. I haven’t done that for years, but when I use old No. 9, I make sure and slop a bit on the workbench and the piece of carpet at my feet. It lends a permanent smell to the environment.

Whenever I would go to Dad’s friends’ places, we would end up wherever their guns were kept and fussed over. The aroma of Hoppe’s was ever-present. Gun shops always had the faint smell of No. 9, either from spillage or recent use or from the used guns displayed. No hunting camp was complete without a small bottle for general cleaning at the day’s end.

The label has changed over the years, and I regret lacking the foresight to predict that would happen because I didn’t save any of the old bottles. The latest designation is Hoppe’s No. 9 Gun Bore Cleaner. The formula has changed slightly, it seems, to satisfy government regulations. The aroma has also changed slightly. But it remains delightful and still drives memories when encountered.

The term iconic seems overused these days, often used for things still in relative infancy. But make no mistake, Hoppe’s No. 9 is beloved, perhaps as much for its many associations as its gun cleaning.

When the fellow walked out of my office in disgust, I had passed the four-decade mark and thought I knew every use for the old solvent. Turns out, exposing one’s character was an additional asset, I thought, as I deliberately spilled some on the carpet beneath my feet.