As it struggles with money woes and dwindling interest, the Yukon Quest needs support from Alaskans 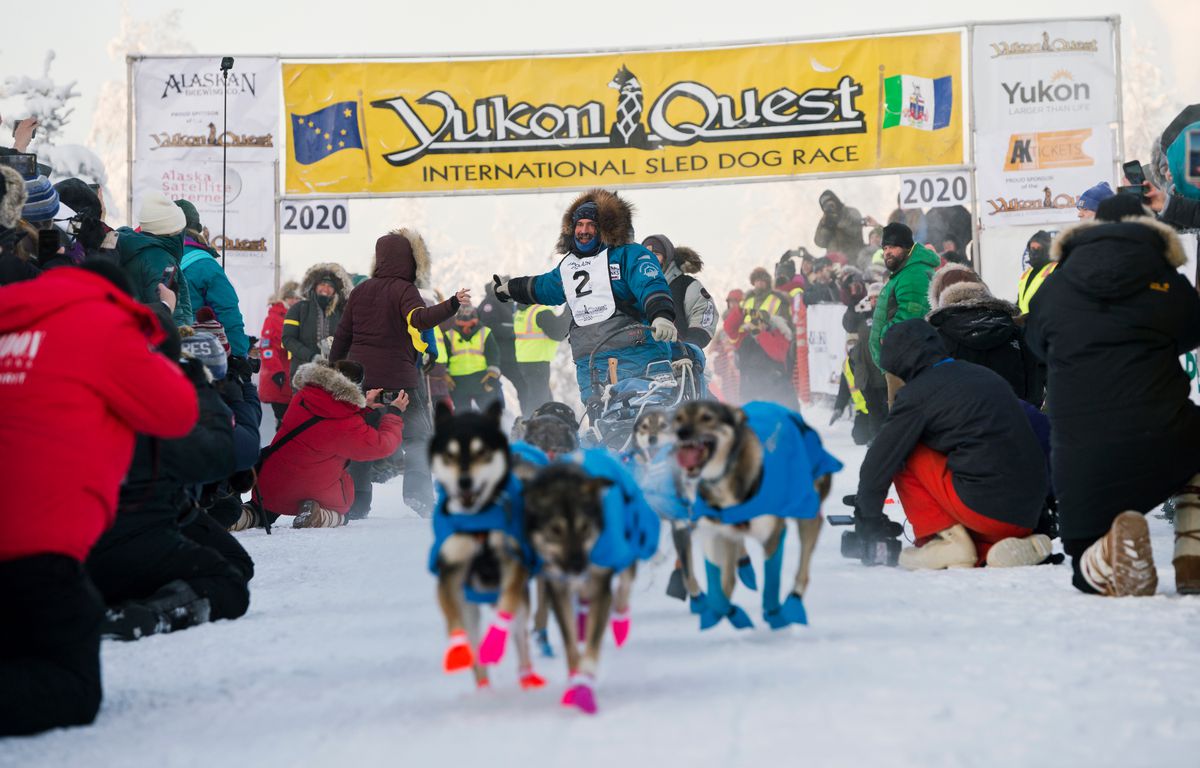 Cody Strathe of Cantwell, one of 15 mushers who entered the 2020 Yukon Quest, gives a high five as he leaves the starting line in Fairbanks. (Marc Lester / ADN)

Cody Strathe of Cantwell, one of 15 mushers who entered the 2020 Yukon Quest, gives a high five as he leaves the starting line in Fairbanks. (Marc Lester / ADN)

It seems like a funny time to be writing about the Yukon Quest. Spring is in the air, the snow is mostly gone — except on the Denali Highway — and sled dogs are enjoying the dog days of early summer.

Or are they? Sled dogs around Alaska are in a bind.

Not since Joe Redington Sr. envisioned the Iditarod Trail Sled Dog Race have the working sled-pullers been faced with the situation now upon them. The early 1970s saw the working dogs in Alaska villages being replaced by iron dogs — snowmachines.

The lure of the long-distance trail revitalized the sport of dog racing. Dog sledding caught the imagination of the public. Kennels that had a few working dogs added a few more, or borrowed a few and hit the trail for Nome. Racing long distances became the thing to do if you owned a sled dog kennel.

The winter of 1984 saw the first running of a new thousand-mile race, the Yukon Quest. The Quest was conceived in a Fairbanks bar over one too many shots of brandy. The four organizing mushers — Leroy Shank, Roger Williams, Ron Rosser and Willy Lipps — envisioned a race that had more of a Bush experience than the Iditarod. They wanted a race with a little more woodsmanship in it.

They achieved their goal. The trail was more northerly than the Iditarod trail and the race was run a month earlier, closer to the heart of winter. The Yukon Quest is cold and dark. It became known as the toughest of races.

[2020 Yukon Quest draws fewer mushers to a grueling, cold and lonely trail. How small is too small?]

Whether or not that is truly the case is a subject of debate. However, as a new breed of musher developed, one not quite as savvy or independent in the ways of the trail, the Quest lost some of its appeal.

Participation began a steady decline, culminating with only 15 entrants in 2020. The Yukon Quest is now in danger of being lost altogether.

There is not a single issue that can be pointed at to say, “This is why the race is not so popular.” The immediate problem is money.

Management borrowed heavily to meet the advertised purse and budgeted beyond its means. Sponsorship, or rather lack of sponsorship, became an added difficulty. Potential sponsors had a hard time seeing any benefits they might receive from sinking even a few thousand dollars into an event with little press and very little chance of a return on their investment.

The Yukon Quest caught the imagination of the Germans and Swiss, but Americans mostly ignored it.

The purists on Quest boards and in management never made a huge effort to publicize the race. Whether that was because they ascribed to the “build it and they will come” theory or believed the Quest was better suited as a smaller event that attracted smaller kennels is unknown. Tepid measures to tag onto the Iditarod suffered the same fate as any half-hearted effort and were doomed to failure.

Now the Yukon Quest is on the verge of bankruptcy. According to the Quest Finishers Club, the organization is well over $100,000 in debt, with half of that coming from bank loans to meet the advertised purse. Overdue payroll taxes, rent and unpaid salaries make up most of the rest of the debt, although federal payroll protection funds related to the pandemic may take care of some of those bills.

The Quest is run by two mostly separate business entities: one American, based in Fairbanks, and the other Canadian, based in Whitehorse, Yukon. The Whitehorse office seems to be solvent. They have an online store and appear to be working within their means.

The Alaska side is quite another story. There is nothing online to purchase. Race information is tough to come by even on the website.

The Yukon Quest needs an influx of expertise and financial aid if it is to survive. Time is short. The Quest Finishers Club has stepped in to try to right the sled by organizing raffles and selling off merchandise in an attempt to make ends meet. An idea is being floated with the goal of getting 100 Quest finishers to kick in $500 each to raise $50,000 to keep the wolf out. That would buy some time for reorganization. The search is on for a business manager with experience and an innovative mind.

The Yukon Quest is too important to lose. It is quintessential Alaska. Long-distance sled dog racing, though a tiny sport, catches the attention of the world. It is a tough sport to follow in progress, but news of it spreads throughout the year by word of mouth. If you question that, look at the summer tourists who pay handsomely to fly to a glacier for a ride behind dogs on snow.

This summer, given COVID-19 mandates, the tourist industry is basically dead. Several thousand dogs that normally work the glaciers and greet tourists are out of a job. They can’t collect unemployment and many of their owners will struggle to feed them.

Yes, sled dogs are in a bind. The Yukon Quest has always been a magnet for small independent kennels with few sponsors and limited means, and losing it would mean the loss of an important part of our state’s history.

Sled dogs are mostly gone in the outlying villages of Alaska, other than a few hot spots that have incentive to keep them. The incentive is racing. The Bethel area has one of the best-organized racing clubs in Alaska, maybe in the entire world. Communities in and around the Kuskokwim Delta support dog racing, and the result is a number of viable dog kennels.

Sled dog racing is Alaska’s state sport. It is an important part of our state heritage. Let’s not make trails without sled tracks another part of our “new normal.” Support the Yukon Quest and help fill the hole the race has dug for itself.